Would you believe that UBC actually has these clocks up in the administrative building? 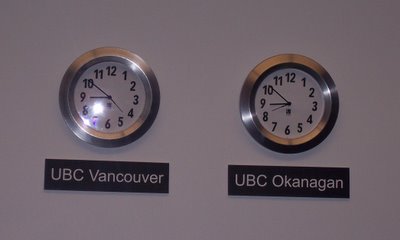 To give you the backstory, last year UBC completed a hostile takeover of the Okanagan University College (or, as I’ve heard people from OUC call it “the occupation”)… one day, out of the blue, UBC & the BC government announced that OUC was going to be a satellite campus of UBC, much to the surprise of students at both schools. So now we are called “UBC Vancouver” and they are called “UBC Okanagan.”

So, UBC doubles my tuition on a daily basis and can’t complete any of their construction projects on time or on budget (unless it’s a private condo that’s going up), but they’ve managed to waste time & money putting up separate clocks for two locations in the same time zone. Excellent.