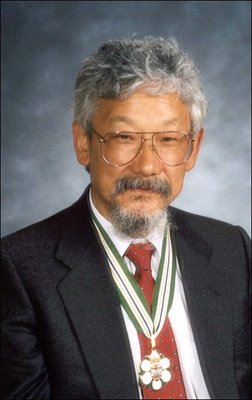 “The University has no business being in business”
-David Suzuki

The last speaker in the Global Citizenship* Seminar Series was David Suzuki. Although I’ve been here at UBC for 5.5 years, this is the first time I’ve heard of him actually speaking here (he was a UBC prof until 2001, when he retired, and is now a professor emeritus). I must say, he was well worth the wait.

In additon to his above quotation (which he said while on a tirade about how the university is no longer fulfilling the role that it was meant to fill — a community of scholars who want to know things for knowledge’s sake (rather than focusing only on profit), who are free to engage in academic discourse without fear of offending the companies that fund everything), he also had some insightful thoughts on grant writing (how we all have to “play the game”, writing elegant grant proposals about how “my research on fruit flies will lead to a cure for cancer”…. if we actually knew where our research was going to end up, we wouldn’t need to do the research!) and his own motivations (his experience being interned during WWII (because he, a 3rd generation Canadian, carried “Japanese genes”) lead to his always want to prove that he was “worthy” of his Canadian citizenship. He also talked about how fortunate he was to attend a university, on full scholarship, in the US that valued the contribution that international students bring to the academic community, rather than seeing them as a source of quick & easy income. He also talked about the reason behind tenure, which is something that I only just recently read about – although the current perception of tenure is that, once you get it, is a free ticket to sitting on your butt for the rest of your life ‘cuz you can’t be fired, tenure is actually in place to allow scholars academic freedom — you could actually criticize or challenge the university and its higher ups without fear of reprisal. He also talked, of course, about environmentalism (and how it was virtually ignored during the election campaign). And he called James Watson** an asshole.

All in all, it was a very interesting talk and all three of this year’s speakers (David Orr, Stephen Lewis and David Suzuki) provided a lot of inspiration and really interesting things ot think about.

*I must say that I can’t stand the term “global citizenship” — it, along with the word “sustainability” are so overused here that they are completely meaningless.

**James Watson’s book The Double Helix recounts the story of how Watson & Crick solved the structure of DNA and is a surprizingly good read. Watson was also featured in a really funny Stephen Colbert piece back when Colbert was on the Daily Show… just go here and then click on “I’m With Stupid” to check it out.

One Reply to “"The University has no business being in business"”