Fall Classic, to be specific.

Yup, Alicia and I have registered for yet another half marathon. This time, it’s the Fall Classic race out at UBC in November. The route is, in my opinion, not ideal as it involves a double loop, which means that you start, you run a loop back to where you started and then you have to go back out and do the loop again! I don’t like the double loop because when my brain sees the place I started it goes “Hooray! We must be finished! Wait, we have to do that ALL OVER AGAIN? Nooooooooo!!” Plus, as you can see from the elevation chart above, it’s a wee bit hilly, and we know how much I love hilly half marathons. But unlike the Edge-to-Edge, (a) I’m going into this with my eyes open that there will be hills, (b) I know these particular hills, as I’ve done my fair share of running out at UBC, and (c) I’m actually doing some hill training this time!

Also on the plus side, it’s a local race, whereas the other fall races that we were looking at were all ones that involved traveling somewhere. Not like any crazy cool destinations, but just far enough that we’d have to take a ferry or drive a long time and get a hotel and whatnot.

In related news, I made a graph of all my half marathon finish times because all data should always be graphed, always and forever, and things aren’t really looking too good: As you can clearly see, my finish times have gotten steadily worse since my personal best in October 2010. Note that the abysmal finish of October 2007 was the result of a foot injury – I had to limp the last ~6 km of that race. But if things keep progressing the way they are going, I’m going to be taking that long to run a half marathon without an injury! In an attempt to stem this tide, I think I’ll need to be a little more serious about my training – and my stretching and foam rolling, this time around.

In also related news, I needed a new pair of running shoes as my old pair had given up the ghost, but when I went out to buy some, I discovered this:

Seriously, every pair of running shoes that you can buy right now is some combination of garish colours. What happened to the good old days when I could just get a pair of white and red or white and blue shoes? But no, now I have to buy “titanium/mint green/hot pink”: The salesperson who sold me the shoes seemed to be quite offended that I thought every pair she brought out was hideous and garish. She actually said to me, in a most offended voice, “They aren’t *garish*! They are just bright colours!”1 I don’t know why she was getting so offended – it’s not like she designed them herself! At any rate, every pair was hideously ugly, so I had to make my purchase decision solely on comfort2. And the “titanium/mint green/hot pink” pair did feel pretty good on my feet. However, the hideously ugly laces on this hideously ugly shoes were actually way too short. So short, in fact, that in order to tie them up, they ended up pinching my feet, or else there wasn’t enough lace to make a bow. After doing a few runs like this – and whining about it – I finally went out and bought some new, longer and non-hideous laces: And now not only are my shoes entirely comfortable, but the white laces take the edge off the hideousness. Plus, on the one run that I’ve done since having these new laces3, I was substantially faster than my other runs of late. Clearly, the hideous laces were holding me back. Plus, at the end of that run, this kickass rainbow came out: 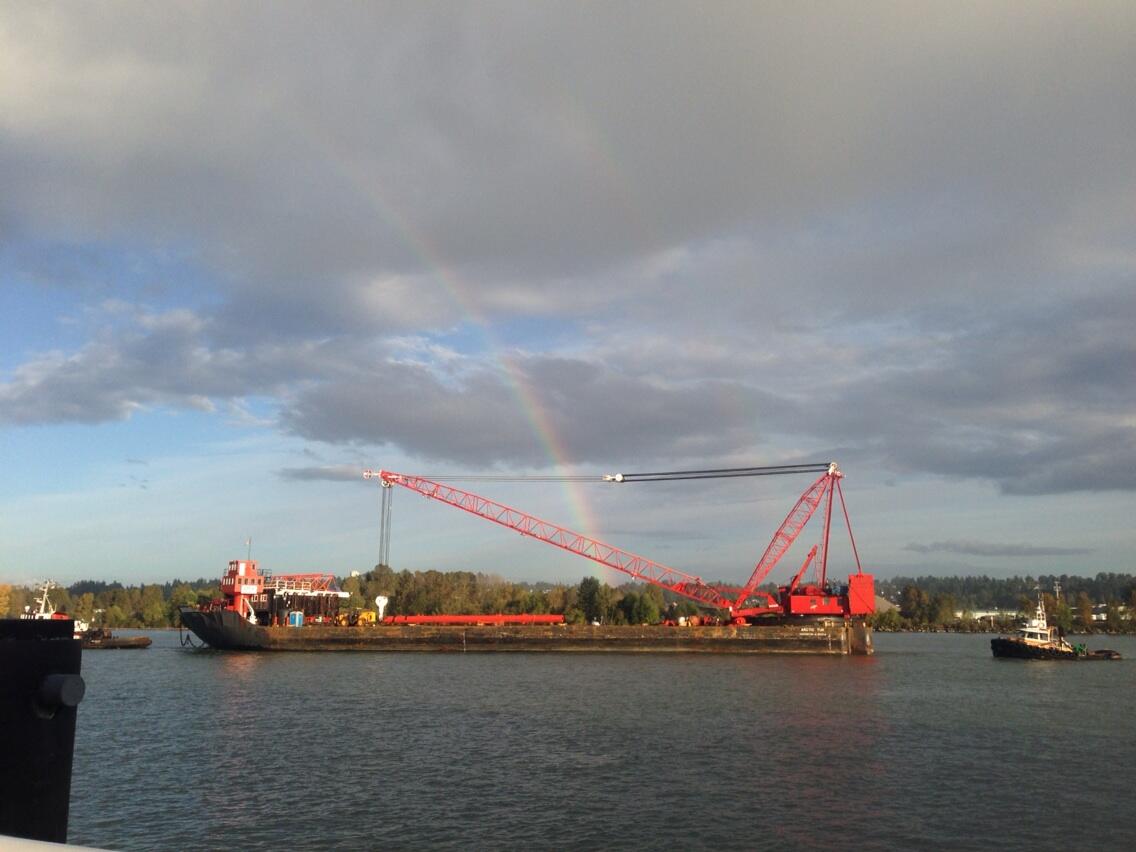 So my new laces are not only performance-enhancing, but they also make rainbows happen!