For the past few years, I’ve been using Sharkies Organic Sports Chews1 as my electrolyte and sugar replenisher on my long runs. They are super tasty and full of nutrition-y goodness. So you can imagine my surprise when I discovered that they’ve been discontinued!!

I finished what I thought was my last pack of Sharkies2 on my long run last Sunday3 and so I went to London Drugs the other day to get some more… but they did have any. However, they also didn’t have the coffee or the tea that I usually buy there, so I assumed that LD decided that it hated me and thus had stopped carrying the stuff that I buy there. I cursed the fact that the Thrifty grocery store in New West was turned into a Save-On, as Thrifty had carried Sharkies whereas I’ve never seen them at Save-On4. But then I remembered that the Running Room carries them and there just so happened to be a Running Room right by the LD. And that is where I was told the news: Sharkies are no more! 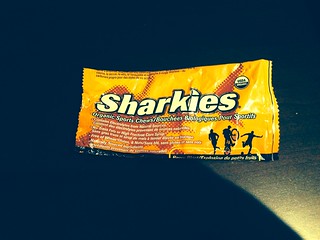 The salesperson at the Running Room told me that the closet product to Sharkies – in terms of nutrient content, taste, and consistency – is Honey Stinger Organic Energy Chews: 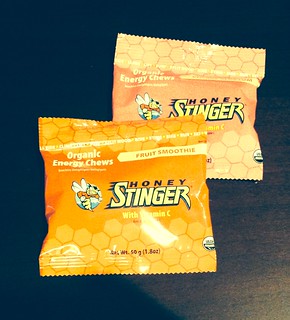 However, this week in my half marathon training plan is the week where I get a bit of a break, with my “long” run being only 12 km. 12 km does not warrant electrolyte and sugar replenishment, so I’ll be waiting until next weekend’s 18 km run to try these guys out. I’ll be sure to report back on my findings!