And speaking of BBQs, I went to one last night. But not just any BBQ. A Bard-B-Q!

One of the things that has been on my 101 things to do in 1001 days list since it’s very first iteration1 has been to go to a Bard on the Beach show. And for some reason, every summer goes by and I don’t manage to get my butt down to Vanier Park for a performance. It’s very strange, because I really did want to go. I quite like Shakespeare. Hell, I did an entire class on “Acting Shakespeare” in my undergrad as part of my minor in Drama. I can still recite this monologue that I memorized in *high school*.

Well, as luck would have it, I got some serious motivation to attend a Bard on the Beach performance of Cymbeline as I won tickets as part of a crazy awesome prize package!

A few weeks ago, someone tweeted about a contest that Lonetree Cider2 was having on Facebook. A typical “like our FB page, enter our contest” type of contest. But I noticed that at the time, which was only a few days before the contest ended, there were fewer people entered in the contest than there were prizes, so I figured my odds were pretty good to at least win one of the 15 pairs of tickets to see Cymbeline at Bard on the Beach 3. And then as soon as I entered the contest, I promptly forget about it. Until they called to tell me that I won the grand prize! The grand prize consisted of:

Not a bad little prize pack, if I do say so myself! 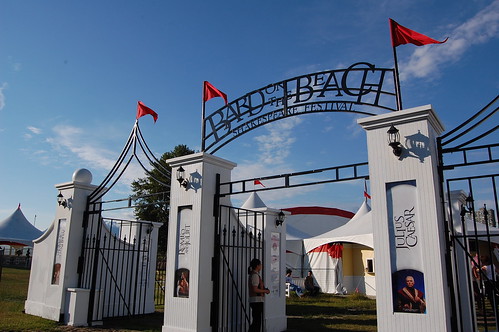 First and foremost, the performance of Cymbeline was awesome. I’d never seen, read, nor heard *anything* about this play before. I even had to go read the Wikipedia entry on it to make sure I’d have an idea of what was going on in it. The cast, however, did such an amazing job that I’m sure even if I hadn’t read it, I would have been able to follow along with no problem. To make things even more interesting, there was a very small cast, so each actor played multiple roles, yet you were never confused as to who was who – even in the scenes where Anton Lipovetsky, the actor who played both Posthumus and Cloten, played Cloten dressed up as Posthumus – thanks to Lipovetsky’s fantastic acting. He conveyed each character so well that you felt like you were watching different people when he changed roles. There was even some hilarious stuff at the end when actors were changing from one character to another *on stage*, ripped off one sash and putting on a different cloak, their mannerisms changing as quickly as the costume! All in all, a fantastically produced play that I highly recommend you check out if you get the chance!

The rest of the evening also did not disappoint. The salmon BBQ was excellent, the view of the fireworks was great (though the music wasn’t all that fantastic, but the fireworks themselves were super cool), the hotel was lovely and breakfast at the Dockside Restaurant was the perfect way to cap it all off!

Image Credit: Posted by Mandy Jansen on Flickr. Several years ago. But since I was too lazy to take my own photo, I just search Flickr for Create Commons licensed photos and that’s what I found!