Hey, remember that time that I mentioned being a total sloth? Apparently my strategy of blogging about my slothiness as a way of killing said slothiness was a good one, as I have managed to turn around my slothy ways and get myself back on track. Since that blog posting, I’ve done:

I’ve also signed up for the 10km Night Race and am tentatively planning to do the 10km Rock & Roll race – for the latter, I’m just waiting for my Coquitlam hockey schedule for October to be posted, to make sure I don’t have a hockey game that morning1. I really hope that my hockey game isn’t in the morning that day, as the medal for the Rock & Roll is gorgeous and I really, really want to add it to my collection!

And speaking of hockey, in addition to playing on my two teams (one in Coquitlam, one in Burnaby), I’ve also signed up for 10 weeks of hockey lessons on Saturday mornings. As I said to my friend Patricia the other day, after two years of weekend MBA classes, I apparently have to be learning *something* on a Saturday morning! Basically, I decided that after 10 years of playing hockey2, it’s high time that I learned how to shoot a puck. We’ve had two lessons so far and I’m finding it very helpful. The class is small (there were only 4 of us there today), which means we get a lot of 1-on-1 coaching and the coach is excellent at breaking down skills into easy-to-understand parts. This is helpful for both improving skills that I’ve developed bad habits on (e.g., skating form) and for working on skills that I never really mastered in the first place (e.g., shooting the puck). The coach also pointed something out in the first lesson – during a game, you probably only touch the puck for 15-30 seconds in total, so how can one expect to get good at stick handling or shooting with so little time to actually do it? So I’m really glad I’m taking these lessons, so that I can spend time working on these skills. Of course, the lessons are only 45 minutes long and we work on a bunch of things3, so I really need to get out to some stick’n’puck to put in some dedicated time working on the skills I’m learning, because you really don’t get good at this stuff until you’ve done it enough times that you no longer have to think about it! 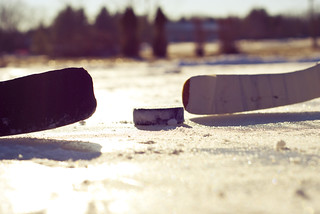 So, the upshot of this is that I’ll be on the ice three times a week from now until mid-November4. Plus, I now have a standing Tuesday night running date, so I’ll be getting that workout in as well. Also, I am now settled into my new office enough that I know where the shower facilities are, so yesterday I went out on my first ever lunch hour run. Since I work so close to the seawall, it would be a crime not to take advantage of that great running route! I think this will be especially useful in the winter-time, when it’s dark before I leave for work and dark by the time I get home – I can run on my lunch when there is actually daylight!

In addition to all of this, I’m also inspired by my goal of running 800 km in 2014. When I lasted blogged about my slothiness, I was 57% of the way to my goal, but 63% of the way through the year. Thanks to my renewed training, I’m now 64% of my way to my goal and we are 70% of the way through the year. So I’m maintaining my relative standing (i.e., I’m 6% behind), but I’ll take that as an improvement, because I had been on a trajectory of falling further and further behind. I’ve crunched the numbers and figured out that I need to average ~19km per week for the rest of the year to meet my goal. It’s a lot, but given the aforementioned Tuesday night running dates and lunch time running option, I think I can do it!