Well, not “beginning”, so much, as I actually put up my tree at the end of November. 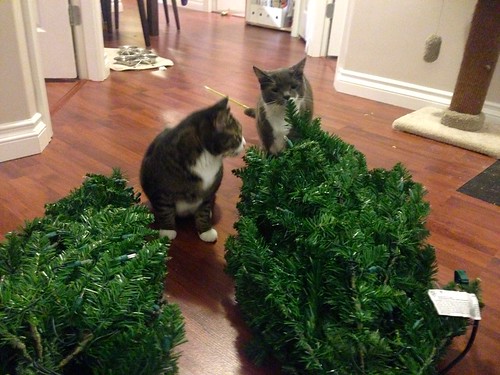 Kitties checking out the pieces of the Christmas tree before I assemble it. 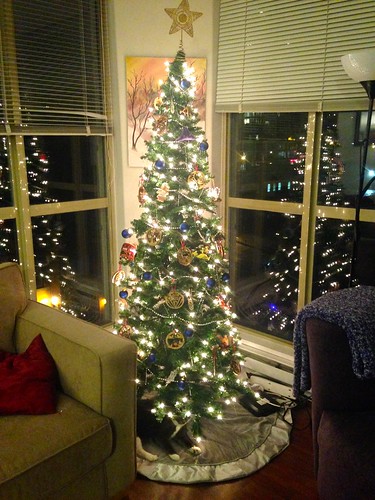 I like the way my windows surrounding the tree reflect the lights. Not shown in the picture, but my big TV also reflects the lights, so it kind of looks like I have a forest of Christmas trees in my living room, all from one tree. So efficient!

But I also added a few extra Christmas decorations to the mix – specifically, I made a wreath (item #83 on my 101 list)1 and I got stockings for the kitties, since the frogs have stockings and I didn’t want Watson & Crick to feel left out. 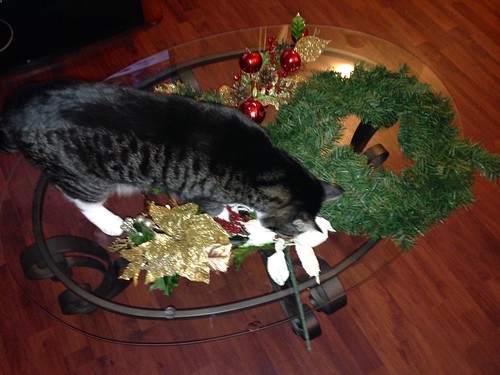 Watson checking out all the pieces before I assembled my wreath. He ended up covered in glitter. 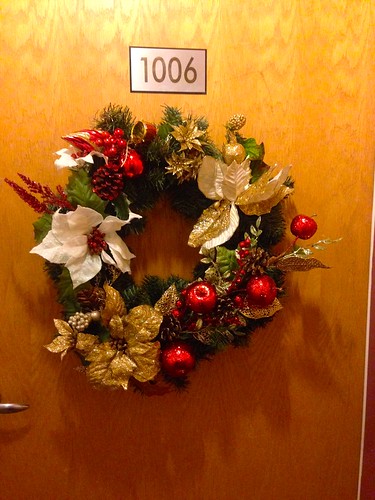 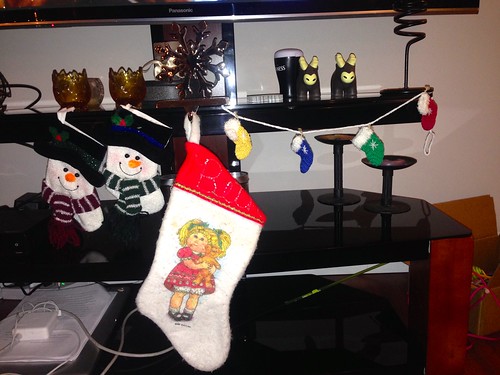 Speaking of the kitties, for some reason they thought that the tree was delicious, and spent the first week or so that I had it up trying to eat the branches. Watson also decided that most of the ornaments were toys that were to be swatted out of the tree. Happily, he got bored of this after about a week, so my patience at taking ornaments that I found in various locations around my apartment – he liked to carry the ornaments around for a tour of the place before dropping them off in, say, the bathroom – and returning them to their rightful place on the tree eventually won out.

So, I’ve said many times that my goal is to break the 2 hour mark on a half marathon. And then just as many times I’ve half assed my training and not met my goal. So I wouldn’t blame you if you didn’t believe me when I said that I’m planning to break the 2 hour mark on the half marathon at BMO Vancouver marathon in May. But this time I’m really, really going stick to it. I’m good at doing the long runs in training so I can go the distance, but this time I’m going to do the hill training and interval training that are required to ramp up my speed to break that elusive 2 hour finish time. I’m emboldened by setting a personal best at the 10 km in November and I’m well past the MBA hangover that still lingered during my training for the 2014 half marathons in April and June.

A long, long time ago I got a Groupon for the West Coast Hot Yoga studio in South Surrey and I loved it. I went virtually every morning before work and I was so alert after starting my day with some deep stretching and core work and so much sweating. Sadly, regular priced hot yoga is too expensive for my blood and, besides, I moved too far away from that South Surrey studio to be practical anyway. Since then, I’ve tried two other yoga studios via Groupon (or one of those other deal sites – I can never remember which one I’ve bought which deal on), both in New West, neither of which I liked. The first one to Bamboo yoga, and I didn’t really love the studio itself (it felt like being in a warehouse) or the instructors, and the second was Bikram New West (which very soon after became Hot Yoga New West) and I hated having to do the exact. same. routine. every. single. time. Plus some of the instructors were really militant, which I understand is intentional with Bikram, but which is totally not my thing. I guess it has been long enough since that experience though, because I’ve gone back to the Groupon well and got a one month of unlimited hot yoga at Oxygen yoga studio in New West. I figured that I could spend a month de-tensifying my muscles and working on core strength and balance and then I’ll be in tip-top shape when I start my half marathon training in January.

Speaking of which, I just bought a Groupon for a half marathon training clinic run by FitFirst in Burnaby, the same place as I did the running study I was in. I really enjoyed the clinics they ran for that study – the group running atmosphere is lots of fun and it basically means that I’ll always have people to do my long runs with. Long runs get very boring when you have to do them by yourself, so despite the fact that this means I won’t get to sleep in on any Sundays (as it runs every Sunday morning) from Jan 18 until BMO race day, I think I’ll be happy on the whole that I signed up for the clinic.

And speaking of good deals…

When I left my old job, one of the things I left behind was unlimited massage therapy in my health benefits plan. Being a hockey player, a runner, and a person who sits hunched over a computer all day at work, I made good use of that particular benefit to deal with my various muscles tightness and such. My new job, while amazing in many ways, has a much more limited amount of massage therapy benefits and since my 2014 limit was all used up2, I’ve needed to seek out a more affordable option to meet my massage therapy needs. Enter: the West Coast College of Massage Therapy. This school, which trains aspiring registered massage therapists, runs a clinic where students get to practice, under supervision of a fully qualified RMT, and where clients can get a therapeutic massage for a fraction of the cost. The cost is $40 for an hour long appointment – though only 40 mins of that is massage, with the rest being taken up by assessment before the massage and teaching you stretches to do at home after the massage – compared to $100 for a 1 hr massage with a fully qualified RMT. And as an added bonus, during December if you donate 4 or mor items to the Food Bank at your visit, your massage only cost $20! Everybody wins!