Celebrating the kitties’ birthday got me to thinking about how I have no idea when the froggies’ birthdays are. I don’t know if they all share the same birthday or if they have different birthdays. And, come to think of it, I don’t even know if you are supposed to celebrate the day the frog eggs were laid as their birthday or the day that the eggs hatched or even possibly the day the tadpoles metamorphosed into frogs. They just don’t tell you such things when you adopt frogs!

So, I have made an executive decision to celebrate the frogs’ birthday on February 19, which was the birthday of Nicolaus Copernicus, the great mathematician and astronomer after whom Copernicus the Third, and his forefathers Copernicus and Copernicus the Second, were named after. 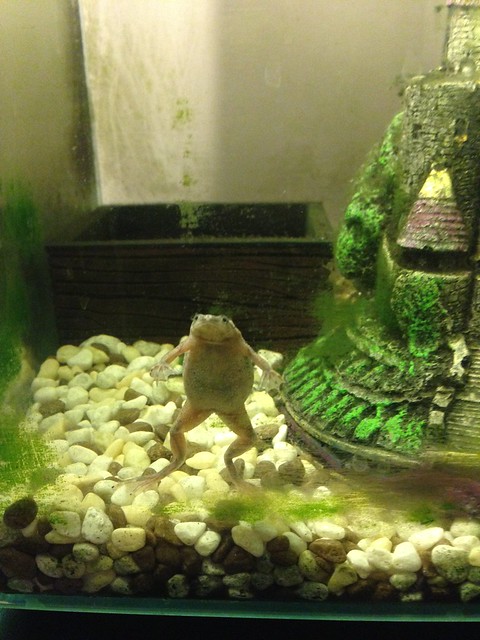 Also, I’m just realizing that I haven’t yet blogged about the recent frog tragedy at Chez Neige. A few weeks back at frog feeding time, only 3 frogs came out to eat. And, as we all know from the back of my car, I have 4 frogs. Now, the frogs are *very* good at hiding, so it was possible that perhaps one of the little guys was just having a snooze in the castle. Unfortunately, the fourth frog never materialized and so after a few days of only seeing 3 frogs, I ended up taking stuff out of the tank to make sure (s)he wasn’t hiding the castle or in one of the plants. And then I had to admit that the frog was MIA. I’m guessing that somehow, despite the lid being on the tank, the frog made a great escape (the lid doesn’t cover the entire area, as there’s some room between the lid and the filter cube in the tank, so it’s possible (s)he jumped out). Aquatic dwarf frogs can’t live more than 20 minutes out of water, so once a frog leaves the tank, that’s pretty much it for them. And there’s really two possibilities as to what happen to the froggy cadaver. Either I will find their dried husk under a piece of furniture at some later date or a kitty got a snack. If it was the latter, I wouldn’t blame whichever kitty it was – they are obligate carnivores, after all, and I don’t even know what would be a worse – slowly dehydrating to death or being devoured by a cat. I hope whichever way my froggy went, it was the less bad way.

Also, I have a bit of a conundrum as all the frogs had grown to be the same size, so I was no longer able to tell them apart. So I don’t even know which frog is missing and presumed deceased! So now I’m going to make another executive decision1 – RIP Raspberry. You are missed.