So I have a slight reprieve from my crazy busy-iness, as the class I’m teaching is on Wednesdays and since next Wednesday is a holiday, I have two weeks to write my next lecture instead of the usual one1. So I figured that I should probably blog my Halloween costume before it gets so late that it’s completely ridiculous. I figure that posting about my Halloween costume on November 6 is only slightly ridiculous.

This year I decided to go as Daenerys Targaryen, the Mother of Dragons. For the uninitiated – and, as I discovered on Halloween, there are a lot more of the uninitiated that I expected – Daenerys is a character in the Game of Thrones books/TV series. I figured she’s short and blonde, so it wouldn’t be too much of a stretch for me.

I searched Google images for inspiration and decided to go with this outfit: 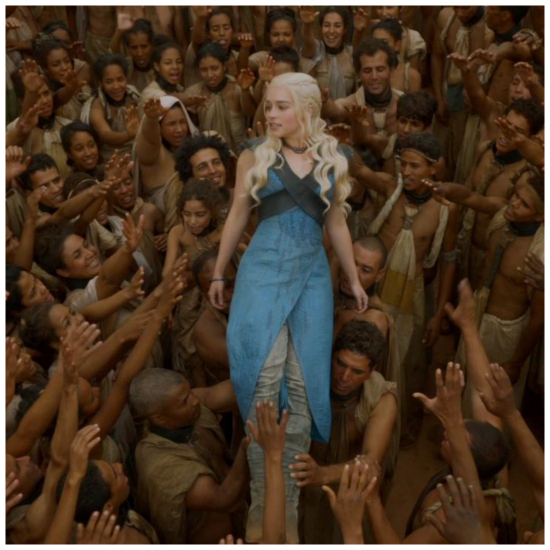 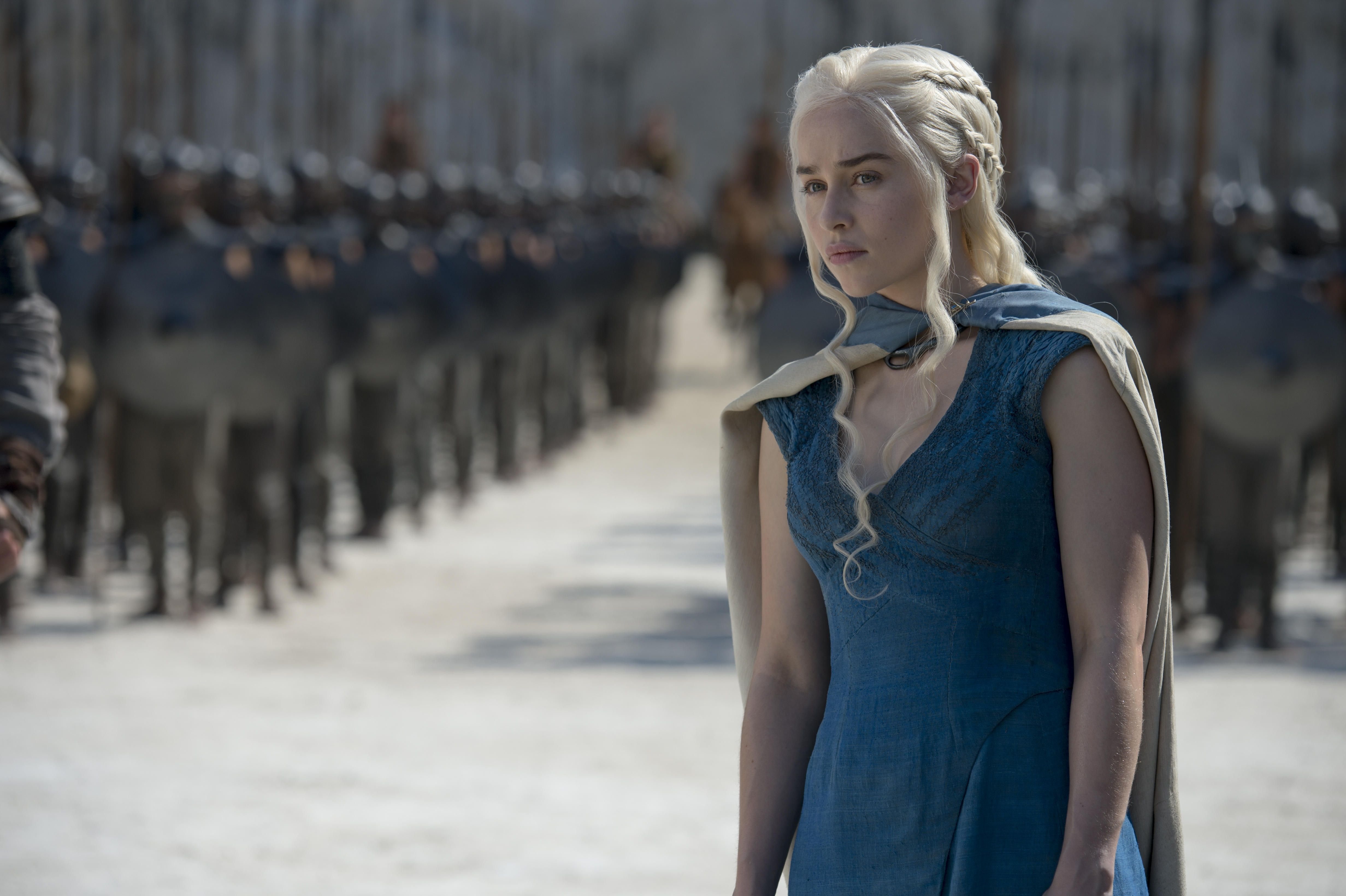 Mostly because I already owned a flowy blue top, pants, and tall boots. That left me in need of a cloak, long platinum blonde locks, and some dragons.

The hair was relatively easy – I just went to the Halloween store by my office and picked up the “Medieval Princess Wig”, which was clearly designed to be a Daenerys wig as it’s the exactly right colour and styled in the exact right way, but they didn’t have the license to call it that.

The dragons were a little more challenging. I figured I could go to any toy store and find me some dragons, but apparently dragons aren’t the in thing right now, as they were hard to find. Eventually I found this guy – who Daniel’s 6-year-old daughter informed me is a character named Stuffy from the show Doc McStuffins2 – and bought three of them, because Daenerys is the mother of a trio.

The last thing I needed for this costume was the cloak. I couldn’t find anything in stores – either regular stores or thrift shops, so I decided to make one. I learned to sew by hand when I was a kid3, but I haven’t sewed anything save for a few stitches to hem something or fix a hole in an existing garment since high school. But I was determined, so I found some instructions on the Internets and headed off to Fabricland to find some material that would match my flowy shirt.

Now anyone who tells you that time travel is not possible has clearly not been to Fabricland recently. Stepping through the door, I found myself instantly in the early 1990s (i.e., the last time I set foot in Fabricland). I made my way through reams and reams of fabrics4 and found a fabric that was not only the exact perfect colour match to my shirt, but was also just the right weight and flowiness for a cape! And it was on sale! I also found a beautiful clasp that I could use to hold the cape on! So I took the fabric over to the counter where they cut it for you and after explaining to the salesperson that, no, I don’t have a pattern, I’m just using some instructions from the Internet (she was horrified by this idea), she cut my fabric for me and then pulled up a clunky device that held carbon copy sheets on which sheet wrote the details of my purchase (what fabric, what length) and gave me the original to take to the cash and kept the carbon copies for her records, I guess? 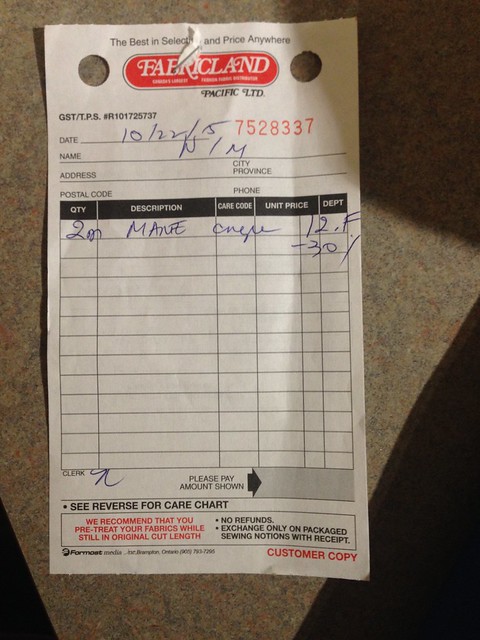 Seriously, it’s 2015. I am shocked you can even buy carbon copy papers in this day and age! You’d think that in the last 20+ years they might have come up with some sort of app to track these purchases (and thus, their inventory), but no. Carbon. Copy.

Anyway, I was very excited to have a little sewing project! I don’t own a sewing machine, nor do I exactly know how to use one, so I sewed it by hand. It only required that I sew the two sides onto the main part of the cloak, sew the two pieces of the hood together, sew the hood onto the cloak (make some gathers as you do to make it nice and flowy), and then hem the whole thing. I actually kind of enjoy sewing by hand – it’s somewhat meditative – though on the night before I had to have my costume done to wear to work I ended up staying super late finishing it, and then I kind of wished I’d taken up Daniel’s mother’s offer to borrow her sewing machine! But I got it done and I was quite proud of it in the end. And I think once I’m done teaching this new course, I might come up with something awesome to make that I can wear more than just on Halloween!

Anyway, here I am in my costume at work: 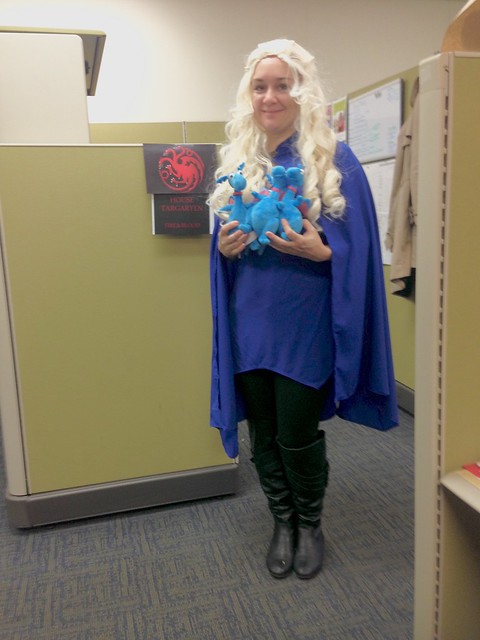 And here I am running an important business meeting at Daenerys Targaryen5: 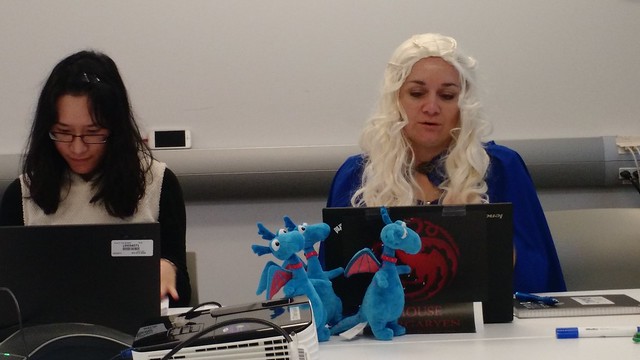 And here’s a close up of my dragons, who somehow acquired some candy! 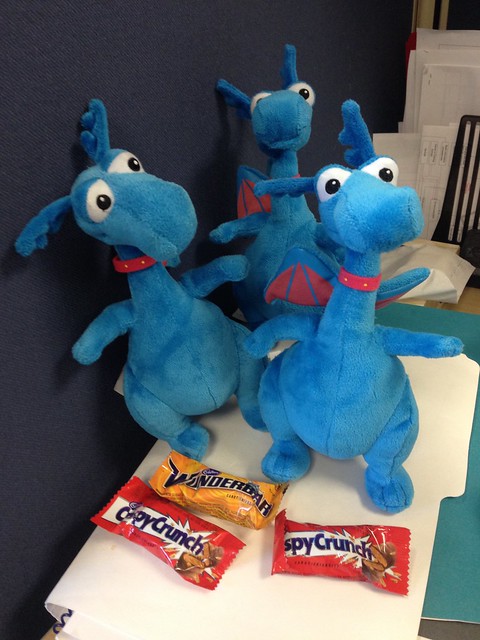 I was surprised by how many people didn’t know who I was. I got a lot of “You’re Elsa!” – and I guess because Elsa has long blonde hair and wears blue, but Elsa wears one long braid and I had curls and a few little braids pulled back at the top. Plus I had dragons! There were also a few “nice costumes” said with a tone that belied the speaker’s thoughts: “Please don’t realize I have no idea who you are dressed up as!” But anyone who knows Game of Thrones knew who I was instantly, including a lady I walked by in the Broadway-City Hall Canada Line Station who yelled “Daenerys Targaryen!!!!” when she saw me. And that was just based on the hair, because I was wearing my coat at the time and my dragons were tucked away in my bag!

Now I just need to find an excuse to wear a blue cape again.