A few months back, I noticed my hands were kind of achy. It was the day after a hockey game so I thought, “Meh. Probably just from holding my stick too tight. It is the start of the new hockey season, after all!” But then I remembered I played summer hockey season, so it wasn’t like I hadn’t been holding my stick all summer… but I didn’t give it too much thought, until I found my hands were achy again a few days later. And then again. And then I noticed that I seemed to be dropping stuff – like my keys or pens or my phone. I mean, I drop stuff all the time, but this seemed like it was more often than usual. Or was it? Maybe I was just noticing it more because my hands were feeling achy?

Anyway, I figured I’d ask my doctor about it – better safe than sorry, right? She asked some questions and took a look and said I had no signs or symptoms of rheumatoid arthritis and though osteoarthritis wasn’t impossible, it’s probably just overuse. I do type a lot – and since I’d just started teaching a new course, I’d been not only typing all day long at work, but also typing all evening long several days a week when I got home from work. She sent me for X-rays to see if there were any signs of osteoarthritis – they came back negative, so overuse is most likely the cause.

I mentioned my hands to the chiropractor that I see (he adjusts my feet, which tend to get jammed up when I do a lot of running on account of my high arches, and loosens up various other muscles that hockey and running tend to make tight) and he told me about low-level laser therapy, which both he and the physiotherapists at his office are trained to do. According to him, the machine that they use is Health Canada approved as both safe and effective. I said I would do some more research, because I’m a skeptical person, especially when someone stands to make money by convincing me of something (he owns the clinic, so even having the physiotherapist do the therapy will result in him making money.). Also, I don’t know much about Health Canada’s regulations for medical devices. I know that Heath Canada regulates drugs such they have to be demonstrated as both safe and effective for specific condition or conditions in order to be given a Drug Identification  Number (DIN), but I also know that Health Canada’s regulations for Natural Health Products are such that a product has been be shown to be safe to get a Natural Health Product Number, but it doesn’t have to actually have been shown to be effective1! Also, when you say something is effective, you have to say what it’s effective for. You don’t say “this drug was shown to be effective”, you say “this drug was effective at reducing pain” or curing a particular form of cancer or getting your blood glucose levels under control, etc. Given that I don’t actually have a diagnosis beyond “my hands are achy, on and off, and maybe it’s because I use them a lot?”, I was a bit skeptical that Health Canada could have certified the machine to be effective at curing on-and-off achy hands – though perhaps just “pain relief” is a possibility. Anyway, I went to the scientific literature and to Quackwatch and it seems that the results are equivocal. This machine may work for some indications (e.g., pain relief, but maybe not better than just applying heat) but we need more and better designed research studies.

At any rate, I figured that it seemed like this machine is safe enough to try to see what happens. I have some physiotherapy coverage as part of my health benefits, so it’s covered. So I booked a consultation with a physiotherapist to see what their assessment of my achy breaky hands would be. Her assessment was the same as my doctor and the chiro – probably overuse and omg, your forearms are ridiculously tight! – and she recommended giving the laser a try. So I went for 6 rounds of having laser beams shot into my hands: 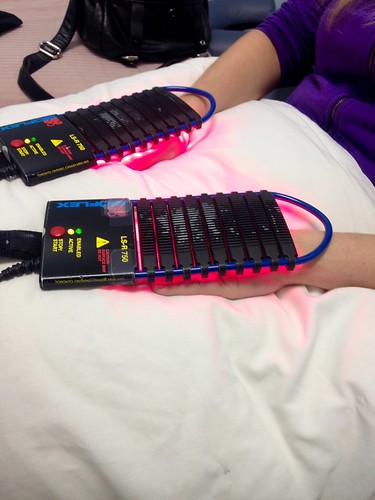 During the few weeks that it took to go through the six sessions, I really didn’t notice any difference. But I took a week off after session #6 to see how my hands felt. I didn’t think much about it over the week and at the end of the week when it was time to email the clinic how I was feeling…. I realized that my hands hadn’t been achy on and off this week. I still noticed them if I tried to open a tight jar lid or lifted something heavy, but they weren’t just randomly aching on and off the way they had been. And despite it being cold out, the cold wasn’t making them ache the way it had before either. Now, I have no idea if the laser therapy actually caused this to happen. This was n = 1, with no control group, and potential confounding variables. The achiness may have just resolved on its own. Or this could be a placebo effect. I’d also gotten a massage during this time and had the massage therapist work on my super tight forearms, so maybe that fixed stuff2? At any rate, my last treatment was just over three weeks ago and my hands still seem to be better – though I’ve has a massage in that time and, as I type this, I feel a slightly ache, but that’s probably because I’m paying a lot of attention to this right now given what I’m typing about!

So, in conclusion, I can draw no scientific conclusions about any of this, but I’m happy that my hands aren’t aching so much anymore.