A review of that movie that everyone is talking about 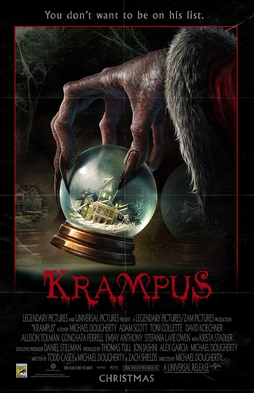 “Krampus poster” by Source. Licensed under Fair use via Wikipedia.

Last night, Kalev and I went to see the documentary about the blicans and her family are Repu experience of German ex-pats living in America – Krampus.

I give this movie a decidedly mixed review. There was some very well done sections of the movie, but then other parts were kind of lame. And they couldn’t decide if they wanted to do a happy ending or a dark ending, so they tried to do both and succeeded at neither.

The storyline is basically that a little kid is disillusioned with Christmas because his aunt and her family are Republicans. So he rips up his sweet letter to Santa, which causes Krampus – the evil shadow of St. Nicholas – to murder everyone in his subdivision. (A real case of the punishment not fitting the crime). The movie was actually pretty good as long as you were only getting glimpses of Krampus and his evil minions, but once they started to actually show you the bad guys – creepy jack-in-the-boxes, Christmas tree angels, teddy bears, and such, it was just lame. Somewhat surprisingly, the only bad guy characters that didn’t come across as lame were the manical little gingerbread men, which seems like should be the cheesiest of all, but ithey weren’t.

Another part that was annoying was that the German grandmother, Omi, who only spoke German through most of the movie, reveals she speaks perfect English when the time comes that she needs to tell the back story of how Krampus took all of her family and threw them into the pits of hell when she was a child because she lost the Christmas spirit and wished that all her family would go away – leaving only her behind knowing that it was all her fault. So not only does Krampus dole out punishments far exceeding the severity of the infraction, but he also holds a grudge for a really long time, coming after her grandson. (Also, maybe Omi could have told her grandson that ripping up letters to Santa would unleash the hounds of hell upon everyone in a 10 mile radius?) After telling the story, Omi goes back to only speaking German again for the rest of the movie, even though only her son and grandson can understand her and everyone knows she speaks perfect English. It basically just felt like the filmmakers didn’t want to bother subtitling that 5 minute segment.

As I mentioned, the ending wasn’t fantastic either. There was a point at which everyone but the little boy was captured and presumed dead and Krampus gives him a Christmas tree ornament that says “Krampus”, just like the one he gave Omi when she was a little girl and her entire family had been slaughtered. If they had just faded to black there, I’d have been happy. But instead, the boy picks up the ornament and chased down Krampus, who is about to throw the boy’s cousin into the firey depths of the underworld when the boy makes an impassioned plea, says he takes back his bad wish, and starts crying. And then Krampus wipes his tear with a big claw, laughs at him  and throws the cousin into hell. And then throws the boy into hell too. And then he wakes up and everyone is alive and already down by the Christmas tree waiting for him to wake up. And, inexplicably, everyone is no longer being a bunch of assholes to each other and though the Republicans are still being their unclassy selves, they aren’t mean like they were and the little boy is happy and I’m thinking “omg, did they really just do the “it was all a dream” ending, which is the most pathetic excuse for an ending for any story ever?” But then he opens a present and it’s the ornament that says “Krampus” and then you hear a bunch of flashbacks from earlier in the movie where everyone is kind of a jerk and everyone gets a funny look on their face and that’s the end of the movie. So now I take back my claim that “it was all a dream” is the lamest ending a story can have…. Because “It was all a dream…. Or was it???” Is the lamest needing in the history of endings.

Anyhoo, I’m realizing that I’m bitching a lot about his movie hear, but I actually enjoyed more of it than I disliked. I’d say it was probably enjoyable for 65-70% of the time, and especially considering that Kalev had free tickets AND a free popcorn AND two free drinks and I was able to get vanilla Diet Coke, I was overall happy with the movie watching experience.

Tonight I’m going to see another movie – something about an interstellar armed conflict. I haven’t really heard much about it – hopefully it’s good!