Medals have gotten considerably bigger over the years. Case in point: The medal on the left is from the 2007 BMO Vancouver half marathon and the one on the right is form the 2015 version of the same race: 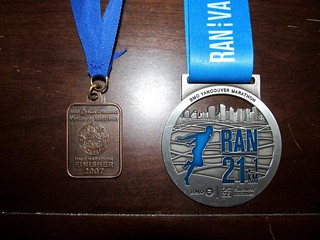 Here they are shown with the 2009 BMO Vancouver medal in the middle – you can see that the progression has been a gradual increase over the years: 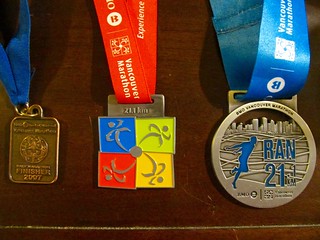 The other way that race medal inflation is occurring is in terms of the number of things you can get medals for.  When I first started racing, you usually needed to run at least a half marathon to get a medal – the BMO Vancouver Marathon was notably in that it gave a medal for the 8 km race, which was virtually unheard of in those days. But these days most 5 km and 10 km races offer a finisher medal.

Plus, races are also offering bonus medals for running multiple races – the Rock’n’Roll series of races does this a lot. If you run two RnR events in a calendar year that are at least a half marathon, you get the bonus “Double Beat” medal. If you run 3, 4, 5, 6, etc. RnR events that are at least a half marathon, there are bonus medals for that too. Plus there are themed bonus medals – like getting the Cascadia medal for running the half or full-marathons in each of Vancouver, Seattle, and Portland. And my personal favourite was that someone I know was given the “World Rocker” medal for running two RnR events that were at least a half marathon or longer in two different countries – because he ran the marathon in Montreal and the half marathon in Vancouver, BC. That’s right folks – apparently RnR thinks that Montreal is not in Canada.

And finally, you can also now get race medals for running non-existent races. The Hollywood Florida Virtual Half Marathon was like this – you just had to send a link to show that you’d run a half marathon distance worth of running during an allotted timeframe (e.g., from an app like Runkeeper or from your GPS watch) and pay US$20 and you got the medal. I did that one, but it didn’t feel nearly as fulfilling as running a real race. Which is actually what kept me from going for the RnR “Bonus Track Virtual Run” – which only requires that you run *any* distance you want at some point between Dec 17 and Dec 31 and then pay them US$26, which, with the current US exchange rate, is about eleventy billion dollars.

I mean, it’s a super cool medal because the guitar pick slides up and down (!), but the fact that you could just go out and run 0.1 km for all they care, means you are really just buying yourself a medal. That’s no fun.

Anyway, all this talk about race medals is getting me excited about running actual races. I really should decide what ones I want to do this year!