I Was Poisoned… By Food!

I was on way to work on Monday and half way through my Skytrain ride, I started to feel nauseated, which is most unusual for me. I managed to sit through my 7:30 am offsite meeting for 2 hours1, got a ride back to the office from a colleague, and then had my (mercifully short) team meeting, but by then I was like “I am *really* not feeling good. I have to go home.” Now, anyone who knows me will tell you that I have to be practically on death’s door to call in sick to work2. I somehow managed to survive the Skytrain ride home and got into my apartment and then basically just dropped my bag, my coat, and my boots in the entranceway and crawled into my bed, where I curled up in a ball of nausea, foolishly thinking I could sleep it off. After awhile of suffering like this (combined with, for some reason, hands and feet that were freezing like they were made of ice), I got up out of bed, headed into the bathroom, and puked violently. Like, so violently my cats were starting at me in horror afterwards. I hadn’t eaten anything that morning, so the only thing I had to puke up was my morning coffee, which I’d consumed before the nausea set in. My morning coffee… and stomach acid. If you’ve never puked up the unholy combination of coffee and stomach acid, I don’t recommend it. It’s absolutely horrifying. It did, however, make the nausea come down quite a bit, so I was able to get into bed and sleep for several hours. I awoke briefly, talked to my mom on the phone3, downed some Neo-Citran in the hopes that it would help with my aches and chills4, and went back to sleep again until about 9 pm5. I was then awake again for about an hour, during which I talked on the phone and tried to each some soup – I managed to stomach about 5 spoonfuls – and then went to sleep again for another 10 hours.

So Tuesday, I didn’t feel nauseous, though my stomach felt off all day – at some points I’d say it was stomach pain, at other points it felt more just tender, and then at some point hunger set in to confuse me as to what sensation(s) I was actually feeling. I was also weak and still had a bit of the chills. I called in sick, and spent most of the day lying on the couch watching Netflix or reading6, with a bit of napping in there for good measure. At some point during the day, my back really started hurting, so I consulted Dr. Google, who told me that back pain commonly occurs with food poisoning, which supported my theory that I had been poisoned by food! 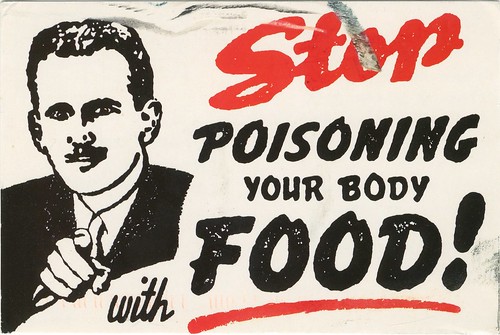 My guess is that it was from some leftovers that I ate on Sunday that were probably too old7, but since, depending on what bug is poisoning you, it can actually be from something that you ate several days before, so I guess I’ll never really know! I was in no shape to attend the Arts Council fundraiser that I was supposed to go to, which made me sad8.

At any rate, today I felt like 80% better – my only remaining symptoms were feeling a bit weak/tired and my brain felt a little fuzzy. I was scheduled to go to the first day of a two-day training session that I really wanted to attend, so I decided I was well enough to do that, but t it probably would not be safe to play my hockey game tonight9.

So basically, the universe is out to get me, given that I’ve had a cold for most of January/February, I *still* haven’t gotten rid of the cough, and just when I’d gotten back into a running routine10, I was hit with this nasty bout of food poisoning right when the weather got nice enough for more running! Fingers crossed that I’ll be better by the weekend, as I’m only 10 days away from my first race of the year!

Image Credit: Posted by Joseph Bergen on Flickr with a Creative Commons license.