It’s almost the end of February and I’m totes behind on all my goals (And I just realized by looking at the date that it’s my Uncle Harry’s birthday and it’s too late (in Ontario, where he lives) for me to call him – Happy birthday, Uncle Harry!). Well, I guess I’m doing OK on one goal: bringing my lunch to work 75% of the time – I currently sit at 76%, so I’m on track for that goal so far! But I ended up being too sick to start training for the UBC triathlon and the Delta triathlon (in March & April, respectively), which means I’ve made no progress on my triathlon goal, very little progress on my run/bike/swim 1000 km goal, and no progress towards my sub-1:50 half marathon goal, plus I *gained* a few pounds instead of losing (thanks to not being able run), though the food poisoning seems to have taken care of those pounds, at least for the moment. I haven’t knocked anything off my 101 list, nor painted a room, nor done most of the rest of the stuff on my goal list.

Last night I made a steak and carrot pie for dinner, using half a package of puff pastry for the crust, which meant today I was faced with the eternal question: What should I do with the other half of the package? On Friday my business analyst at work was telling me about this place she went to that has amazing cream puffs, and I guess that was stuck in my brain so I decided to make some of those.

I know it’s a bit of a cheat to use frozen pastry dough, but I decided to make the custard from scratch, which I’ve never done before. It was actually surprisingly easy and it tastes shockingly good. 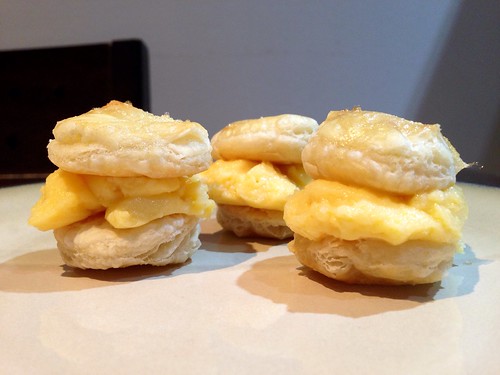 The picture doesn’t really do them justice – I think they almost look like scrambled egg sandwiches! I use free range eggs and so the yolks are very yellow, which makes the custard very yellow. I guess if I’d used caged hen eggs, where the yolks are super pale, the custard might be prettier, but I much prefer free range eggs. And it tasted great, which is what’s really important. I think next time I’m going to try making the dough from scratch.

The custard required three egg yolks, which meant I was left with three unused egg whites. I used one of the egg whites for glazing the pastry, which means now I’m faced with the eternal question: What should I make with my two egg whites?