In the latest instalment of Beth’s 2016 health woes, apparently I am now infected with the highly contagious adenovirus. Because apparently having a cold, which this year comes associated with the “100 day cough”1 and then having food poisoning wasn’t enough. But I’m getting ahead of myself.

Last Wednesday night, I played hockey. I felt completely fine, other than my little cough, which I knew was just a holdover from my January cold, and suffering this devastating upper body injury: 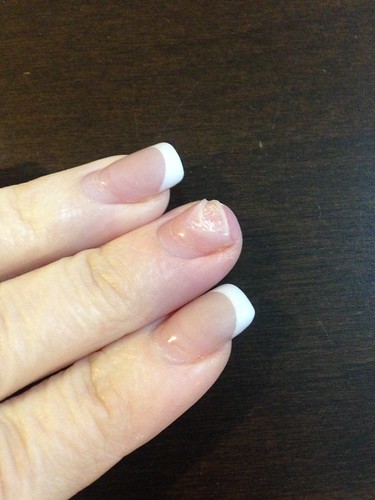 It was the first time I’ve broken a nail playing hokey. I went home from my hockey game and decorated some mini-cupcakes that I’d baked to take the work the next day for a wee tea party we were having for my boss’s birthday. Then I went to bed and realized that my hands and feet were pretty cold, which was reminiscent of my recent food poisoning, but I didn’t feel the least bit nauseated, so I didn’t think it was that again2. I had trouble getting to sleep and I thought I was having weird anxiety thoughts about work that were keeping me up – which is really unusual because (a) I rarely have trouble sleeping and (b) no one should ever really get that worked up about Agile software development – but the next 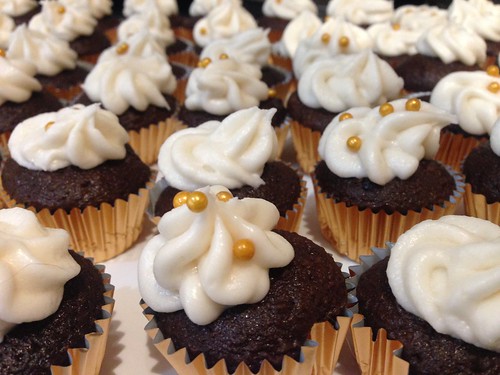 morning I realized that I actually had fallen asleep and was having crazy fever dreams. Because I had a fever. I actually got up and got ready for work thinking, “I’m sure I’m just tired from being up late last night due to hockey and cupcake decorating and not being able to fall asleep” and then “Hmm, I think I’m a little bit warm” followed by “But I need to bring these cupcakes in to work – they are so pretty!” I finally decided to take my temperature and it was 39 degrees C – not extreme fever, but definitely a fever.

And then I thought about the idea of getting on the Skytrain travelling all the way to work feeling like crap and who knows what I had that I could be spreading around to everyone on transit and who the heck wants to eat cupcakes made by someone who is fevered anyway and so I called in sick. And thank goodness I did, because I got back into bed and then continued to have that fever for the next day and a half, alternating between the chills (like I was wearing full length yoga pants, a t-shirt and a hoodie and big fuzzy socks and a toque and was still cold under my duvet) and sweating and chills and sweating for the next day and a half. I didn’t get out of bed longer than it took to either go to the bathroom or boil water to make Neocitran, for a day. On Friday afternoon my fever broke and I finally managed to graduate to sitting on the couch. By Friday evening I was feeling considerably better, other than the appearance of a slightly sore throat and, of course, the cough. I decided I must have had the flu and now I was getting better.

Saturday was the Hot Chocolate 5 km race and I since it was sunny and since I had been stuck in bed for 2 days, I decided that since I was feeling better, I would go, but I’d be responsible and just walk it rather than run. It was only 5 km and the fresh air and stretching my legs would be good for me3. It was actually quite nice to get out for a walk like that AND I got my first race medal of 2016 AND I got a delicious hot chocolate. 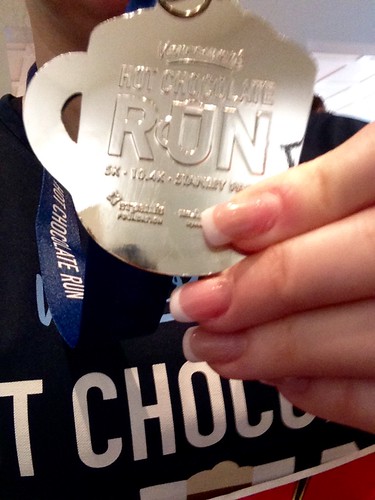 I took it easy the rest of Saturday, but Sunday my throat started to be more sore and I decided that while a walk was one thing, a hockey game was an entirely different beast and maybe I shouldn’t push myself and instead should rest up and try to get 100% better for the playoffs. I also decided that if I still had a sore throat in the morning I would go see my doctor because maybe it was strep throat?

So today I went into work and called my doctor’s office as soon as it opened and got an appointment for 11:45 am and almost every person I saw at my office before I left to go to the doctor’s office said “What the hell is wrong with your eyes?” (or something to that effect). Because Captain Oblivious here managed to get ready for work – including putting on my makeup – without noticing that my eyes were the most bloodshot eyes that have ever been bloodshot. When I got to the doctor’s office my eyes were also the first thing my doctor commented on and she said, “You’ve got adenovirus”. Or more specifically pharyngoconjunctival fever caused by an adenovirus. Apparently this starts out with the whole fever and sore throat thing (when she looked in my throat she said “I can see ulcers in the back of your throat”) and then progresses to a conjunctivitis, a.k.a., pink eye (though in my opinion “pink” does not really do it justice), which will probably start to get all disgusting and goopy in addition to looking like someone filled in the whites of my eyes with a red Sharpie marker. Since this is a virus, there’s nothing I can do other than wait it out, though thankfully it’s a self-limiting condition. Then she said, “Adenovirus is highly contagious. You really shouldn’t go to your office this week at all.” 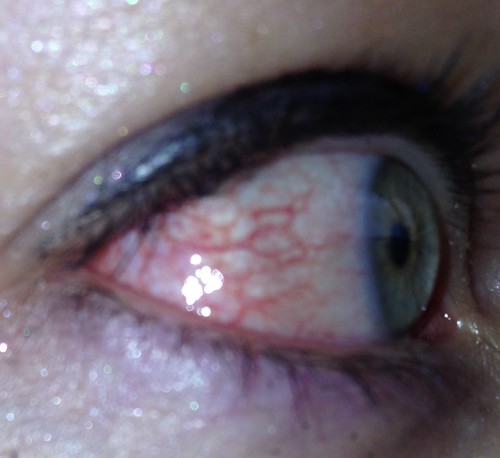 There’s some about being called “highly” contagious that seems so much worse than just “contagious”.

Of course, I’d already taken transit into work, had a few meetings at the office, and taken the bus to the doctor’s office. So my apologies to anyone I may have crossed paths with – I didn’t know I was highly contagious and then once I did, I did my best to touch the bare minimum of things I needed to touch in order to transit my way home. And now I’m stuck in isolation in my apartment until Friday. Which is like the worst nightmare of an extreme extrovert such as myself.

Before I left my doctor’s office I did ask two all important questions: “Will I be OK to play my hockey playoffs this coming weekend” (Yes.) and “Can I give my highly contagious adenovirus to my cats?” (No.)

Here’s hoping that I get a good night’s rest and that my eyes aren’t glued shut with zombie eyeball conjunctivitis goop in the morning!