So I went skiing up at Whistler on Saturday. It’s pretty freaking awesome to live somewhere where you can get up in the morning and in less than 2 hours be on the slopes of some of the best skiing in the world. You can spend the entire day skiing and still get home in time for dinner! This is something that I really should take advantage of more often!

The conditions were decidedly spring skiing conditions – the temperature in the village got up to a high of 19 degrees C and even up at the peak it was above 0. It made for a variety of conditions, depending on if the snow was in the sun or the shade, including rather icy for the first couple of runs (as the peak did hit 0 degrees overnight), somewhat soft in some places/at different times, and downright sticky in yet other places.

We spent the morning on Blackcomb and the afternoon on Whistler, during which time we made our way over to the Flute Bowl and I went down my first ever black diamond at Whistler! I say “went down” as opposed to “skied” because, while I skied most of it, there were parts that I fell down and after my second fall, where I was having trouble even getting back up on the steep part of the slope that I was on, I sort of slid down sideways. I’d fallen twice because my legs were pretty fatigued by this point in the day, what with me being a super sloth these past several months1, and the snow was rather heavy, making it difficult for me to get my back leg to follow my front leg when I was turning, which I needed to do a lot to slow myself down because it was really steep! I could manage it on my strong side, but my weak leg just couldn’t do it, and it tripped me up. After the second fall, once I had retrieved my one ski and two poles that I’d lost in the fall (though thankfully all within reaching distance), I was having difficulty even standing up on the steep slope and as I tried, I started sliding down. After a couple of attempts, I thought “Fuck it” and just let myself slide down until I wasn’t on such a steep slope anymore and could then get up and ski the rest of the way. Not the most graceful move and somewhat embarrassing, but it worked.

Also, during the whole time we were in that bowl2, there was not a single other skier or snowboarder there. I mean, the mountains weren’t super busy because it’s spring and the weather in Vancouver was fabulous, so most people have moved on to spring activities rather than hitting the slopes3, but there were lots of other people on all the other slopes we went on, so it was a bit surprising that no one else was there – anyone who is a halfway decent skier/boarder and who is in better shape than me would have had an awesome time there. But it was actually pretty cool to feel like we had an entire mountain to ourselves!

After that, I was pretty much too tired to handle anymore particularly strenuous runs, so we made our way back to the Peak-to-Peak gondola via a relatively easy route and then down Blackcomb, which took us to the end of the day.

On the way home I realized I forgot to take any pictures other than this one, of our après-ski beers4. I had an Uncommon Lager from Whistler Brewing – it seemed appropriate. 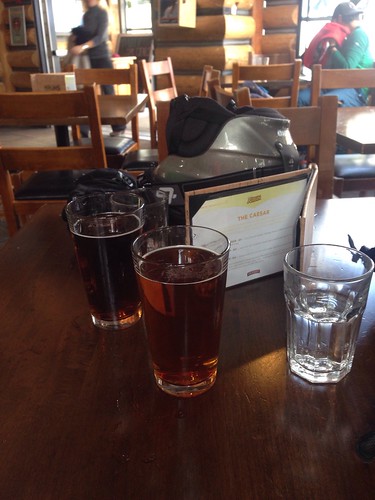 Goals for next year: