Gone With The Wind

Totally thought this posted a few days ago, but just came onto my blog to write a new posting and discovered I hadn’t. Anyway, here it is now!

So it turns out that I bought my last phone a really, really long time ago. Like more than 3 years ago, which in phone-years, means my phone was 892,386 years old. It was an iPhone 5 – not even a 5S, let alone the newer 6 or a 6 Mega-Double-Plus size. A lot of features have come out on iPhones since I bought that phone – like TouchID (where you scan your fingerprint rather than typing in a passcode to unblock your phone, which is super useful),or the phone being able to count the number of steps you take (slightly less useful when you leave your phone sitting on your desk or your kitchen counter for half the day, but kinda cool when you do carry it around) or a camera that can actually take decent photos in light that is less bright than full-on sunshine at high noon). But I am cheap and I don’t like throwing out things that are useful and replacing them with a slightly newer and shinier version. The straw that broke the camel’s back, however, was that my battery, after 3 years of constant use, decided that it no longer wanted to hold a charge, so it wouldn’t last me anywhere near a day (despite the fact that I put the phone into “Low Power Mode” pretty much all the time), which necessitated me constantly having to bring my charging cord with me and always needing to find a place to charge it.

My problem then became what phone to buy. I really love my iPhone, but I did *not* want a phone that is bigger than the one I had. I run a lot and when I do, I have my phone strapped to my arm. And I am a small person, so the iPhone 5 already takes up most of my upper arm – I couldn’t even imagine having something bigger – it would be so cumbersome! Fortunately, Kalev keeps abreast of all the iPhone rumours and told me a while back that Apple had a plan to bring out a phone that basically had all the feature of the iPhone 6, but in the iPhone 5 size. And so I waited and lo, the prophesy was true! The iPhone SE has basically all the features of the iPhone 6 that I wanted: TouchID, wicked good camera, Apple Pay, stuff that makes it faster than my old phone1.

While I was deciding it was time for a new phone, I also decided that it was time for a new cell phone provider. I was with Fido and while I never had any issues with their service, their price tag seemed a bit high for what I was getting. So I decided to switch over to Wind. Wind is a lower price carrier – I’m able to get everything I had in my Fido plan (unlimited calling and texting in Canada, caller ID, voicemail) plus 5 times as much data (5GB vs the 1 GB I had with Fido) for less than half the price I was paying to Fido. The trade-off is that the Wind network doesn’t have as good of coverage as Fido, though I’m so rarely out of the city, it’s not really a problem for me2.

I consulted a few people who use Wind and they all told me that they’d not had issues and one person even pointed out that since you don’t sign a contract with Wind, I could try it out and if I don’t like it, I can always go back to one of the bigger carriers. So I decided to take the plunge and sign up for Wind. After a couple of technical hiccups3, I was up and running with the new phone and am ever so happy with it.

The next step in the process was that I needed a name for my phone. I’d totally phoned4 it in one my last phone (the iPhone 5) and named her Bellatrix 2, as the previous phone (the iPhone 3G) was Bellatrix. I name my electronics, with some exceptions, after female literary characters (see: Bellatrix, Hermione, Ginny Weasley (my external hard drive), Marla, and Daenerys), and the name for my new iPhone SE just came to me as I thought about the fact that I’d “Gone with the Wind”. Everyone, meet Scarlett ((I absolutely loved the movie Gone with the Wind when I was a kid and watched it many times, as we had it on a VHS tape. Because, like my previous phone, I am 892,386 years old. I even dressed up as Scarlett O’Hara one year for Hallowe’en.)): 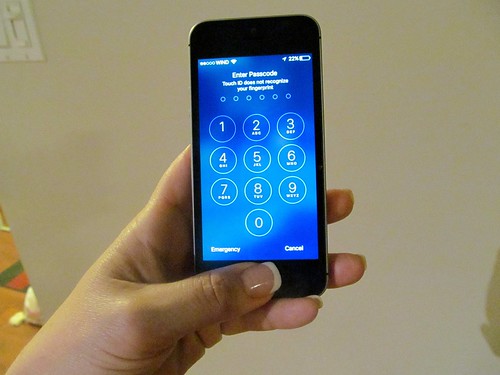 I thought that since I was getting a new phone that is the exact same size as my old phone, I’d be able to keep using the same case, but my old case has a slight problem: 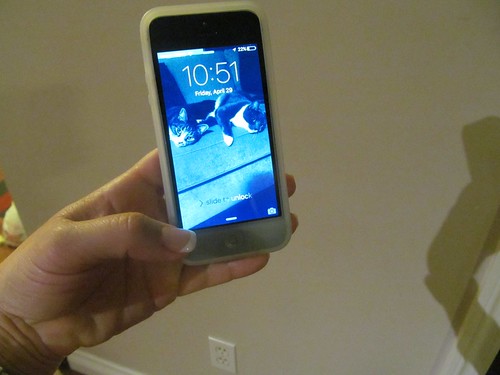 As you can see in the above photo, my old case covers the home button, which was fine with the iPhone 5, as you can still press the home button through the silicone case. You cannot, however, do Touch ID through the silicone case because the home button needs to be able to scan your fingerprint, which it cannot do through silicone, and Touch ID is my favourite thing that this phone offers. So I ordered a new case that won’t have this problem. It also gave me the opportunity to buy a case with a slot on the back to put my Compass card5 in. 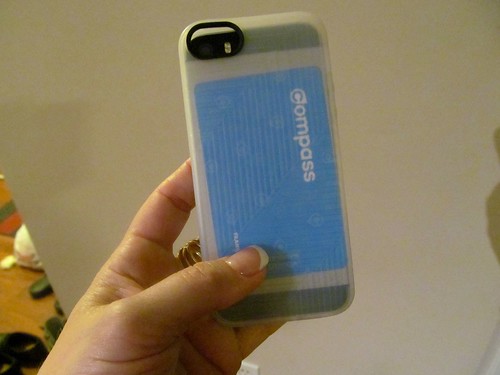 I currently keep my Compass card stuck in the back of my case, but it’s a bit of a pain to have to take my card out from there, especially given that 5 days a week I have to tap my card a total of eight (!) times going to and from work and the faregates cannot read the card through the silicone case. Apparently once I set up Apple Pay, I won’t be able to leave my Compass card in my new case when I scan it (as Apply Pay interferes with the Compass Card system), but even still, it will be a lot easier to slide it out of a card slot than it will be to half remove my case every time I want to tap my Compass card. I’ve ordered a new case from Amazon – should be here next week. Hmm…. I suppose I will have to name my new case Tara.