Another Running Season = Another New Pair of Running Shoes

Just like last year around this time, I found that my shins were kind of hurting for the first several kilometres when I went out for a run, which is a sure fire sign that I needed new running shoes! Fortunately, when I popped by the Running Room on the weekend, they were having a sale, so I did what I always do, which is try on every pair of neutral running shoes they have in my size and then end up buying a pair of Asics Nimbus. I actually told the sales guy that this was what was going to happen and he said, “That won’t happen this time! I have a pair you are going to love!” and he handed me a pair of shoes that I tried on and decidedly did not love. I have high arches and the shoes he gave me (I can’t even remember what kind they were) had completely flat soles – no arch support at all. I told him that I didn’t like them and why, and he proceeded to completely ignore more for the rest of my time there1! He handed that pair of shoes to another women, who put them on, went out to run around the block in them, came back and said “These shoes have no arch support!” Despite the sales guy abandoning me, I had a pile of shoes that he had grabbed while he was grabbing the pair that he was sure I’d love, so I tried them all on, ran up and down the street in a couple of them, and bought, as usual, the Asics Nimbus. (I wanted to buy two pairs and alternate them, which is what I did with my previous pair of pairs, but they only had one of this shoe in my size, so I couldn’t. I really should go check out other Running Room locations to see if they have sales on too!)

Unfortunately, running shoe makers having come to their senses in terms of not making every pair of shoes in garish neon colours was short-lived, so unlike the shoes I bought the last time, which were reasonable looking white-with-blue-trim and white-with-green-trim (I had two pairs I was alternating between), this time I had to buy these garish orange things: 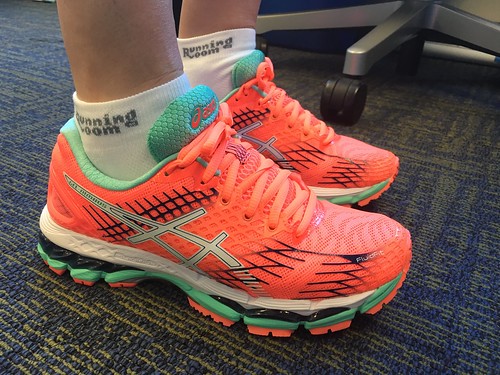 I guess on the plus side, at least they aren’t hot pink with neon green!

For the record, I tracked my mileage on the two pairs of running shoes that I was using and I ran 342.8 km in my Asics and 300.5 km in my Sauconey. According to my extensive research (i.e., Google search), you should be able to run about 300 miles – which is 482 km – before you need a new pair of running shoes, so just like my previous pair, these guys did not last as long as they should have.

I’ve taken this pair out twice so far and so far, they feel pretty good. Here’s hoping they last me 300 miles instead of 300 km!