As you know, I like to cook and bake and I like to try making new things. My decision-making process for what to make usually goes something like this. “I have ingredient X that I need to use up. What can I make using ingredient X?”1 Case in point: I had leftover shredded coconut from when I made some coconut squares for a bake sale at my office2, so I decided to try making macaroons for my hockey team’s season end wrap up party. Making macaroons requires egg whites, so then I had an opened carton of egg whites that I needed to use up, so I decided to try making the thing that is sometimes confused with macaroons: French macarons – which I brought to my Arts Council Board meeting. Now I have a giant Costco-sized bag of almonds that I bought to make macarons, so I need to come up with another recipe that requires lots of almonds…. or maybe I’ll just make a lot more macarons, because omg they were delicious!

In case you are wondering what the difference is between a macaroon and a macaron: 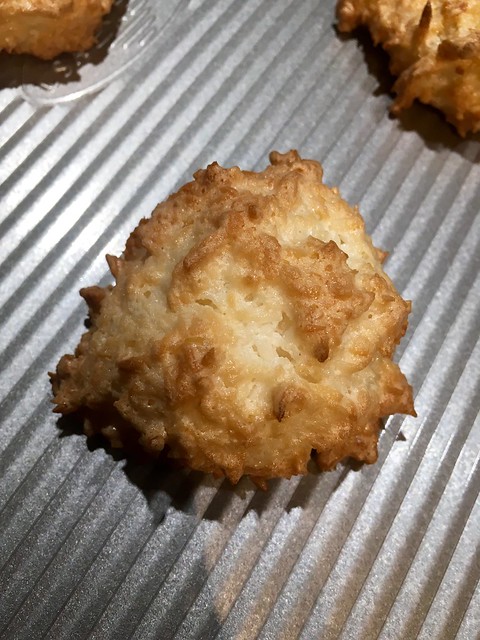 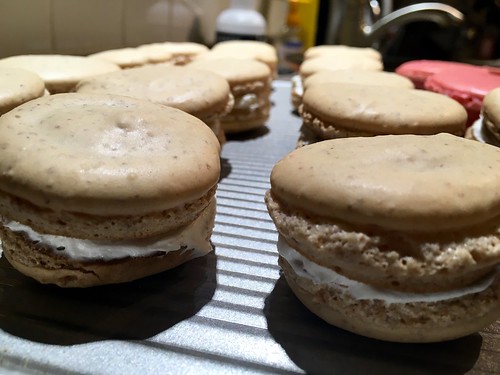 It’s easy to see how the two can be confused: their names are very similar and both are meringue-based pastries. I’ve only ever known macaroons to be made with coconut, though Wikipedia tells me that it was originally made with almonds and can also be made with other nuts. Macaron are typically made with almonds, but you can make a coconut macaron (though the recipes I’ve seen for this still use almonds as the base, but add coconut extract to flavour it). So I guess the real difference is that macaroons use big chunks of whatever nut you are using and are shaped in a mound, whereas macarons use very, very finely ground almonds, are shaped in small circles and have a smooth top with signature “crinkly feet”, and you make them into a sandwich with some sort of filling. As I was reading about this, I got to thinking “Well, what’s the difference between an almond macaroon and an amaretti?”, since an amaretti is a mound shaped cookies made from meringue mixed with almonds? And then I found this article, which actually gave a bit of a history of these cookies. In short:

The other interesting thing I read in that article was that “two Benedictine nuns, Sister Marguerite and Sister Marie-Elisabeth, seeking asylum in the town of Nancy during the French Revolution (1789-1799), paid for their housing by baking and selling the macaroon cookies, and thus became known as the “Macaroon Sisters”” – being a Mary Elizabeth myself and having a sister named Nancy, I found this amusing!

I read quite a few different macaron recipes to figure out what I needed to do to make them and read in a few different places that they are really easy to screw up, so I was pleasantly surprised when mine turned out well. I decided to do half my batch as just plain (i.e., not coloured cookies) with buttercream icing as the filling and the other half as pink with raspberry buttercream icing (because I happened to have some raspberry jam I could use to flavour the buttercream icing). The only issue I had was that rather than split the beaten egg whites in half and put the pink food colouring in at that stage (as the recipe suggested), I made the batter, split that in half and added the food colouring to the batter – this meant that the pink batter actually ended up being mixed beyond the optimal mixing point (the recipe specifically says to fold it 35-40 strokes!), resulting in the batter losing some of its stiffly beaten egg consistency, so that when I piped the pink batter onto the cookie sheet, it spread out a lot, resulting in much bigger cookies than I intended. They still rose and got the crinkly feet, so all was not lost. And they tasted great, so no one complained about the size. 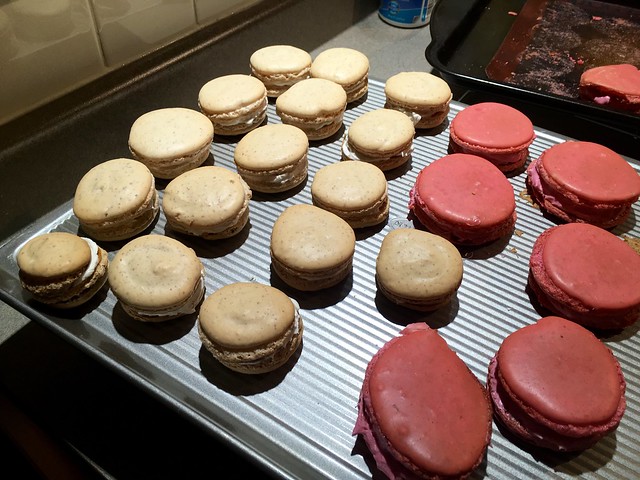 At any rate, I’ve now added both macaroons and macaron to my list of “new foods I made in 2016” – one of my goals for 2016 is to make 16 new food or drink items that I’ve never made before. And the macarons were so freaking delicious that I think they are going to become one of my go-to fancy desserts, alongside my chocolate amaretto cheesecake and mocha cupcakes with ganache and mascarpone whipped cream topping.