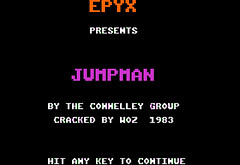 I’ve never been much of a video game player. The number of video games I’ve ever really gotten into can be counted on one hand. I remember playing Jumpman Jr on my Dad’s Commodore 64. The main character was a pixelated stick figure who you could make climb ups pixelated rope or pixelated ladder, trying to avoid being shot by a bullet (which was a single pixel) while you.. hmmm… I can’t actually remember what the object of that game was. 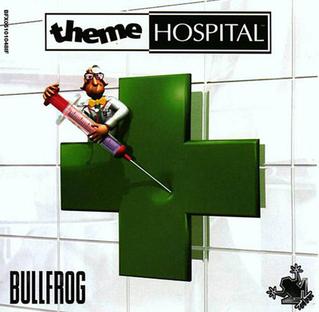 In university my friend Therese and I enjoyed a game called Theme Hospital where you built hospitals. It was sort of Sim City-like and you had to decide who to hire (nurses, doctors, custodians, etc), what units to build (more surgical suites or more diagnostic imaging rooms?) and how many vending machines to put into your waiting room (if you put enough, you got an award from the national dental association for increasing business for them). During those times I also played NHL ’98, as my then husband got me hooked on that one.

The next video game I played wasn’t for probably a decade or so – Boogie Bunnies. It was like the various jewel matching games, but you had to match bunnies of the same colour. When you matched them they danced and giggled and blew up. I never understood why those bunnies were so happy about getting blown up, but the game was rather addicting.

Fast forward to last year, when my then boyfriend’s kids got me playing an iPhone/iPad game called Cooking Fever.  In this game, you serve meals to people at various restaurants. You can upgrade your kitchen equipment, your ingredients, and your restaurant’s interior to make more money and then use that money to but more upgrades and more restaurants. Now, I have to point out that in my youth I worked in restaurants serving food to people and I hated it, yet here I am playing a game doing exactly that, but for fun. This game really lends itself to completism, because you work to complete all the levels of a given restaurant and then you want to complete all the tasks in a given restaurant (one of which is to complete all levels with 3/3 stars), but then there is a list of achievements to complete across the whole game (like upgrade 5 of your restaurants or make a total of one million dollars from your restaurants) and you want to complete those. I’ve now completed everything in the game and so have to wait for the occasional “challenges”, where you get a limited amount of time to complete 15 new levels, or new restaurants, which don’t come out all that often because they must take a lot of work to create.

Soon after all that, my Twitter friend Jen introduced me to Neko Atsume or, as I call it, the internets kitty game. The object of this iPhone game is to attract cats to your yard by putting out food and toys for them. In appreciation, the cats leave you sardines or goldfish, which you can use to but more food and toys (why a cat would leave you a fish rather than just eating the fish is beyond me, but I guess I’m not an internets cat, so I just don’t understand how their minds work). There are special rare cats that require specific combinations of certain toys and food to show up and your goal is to get all the cars to come to your yard, get photos of them when they are there to fill up you album, and get them to come enough times that they leave you a special gift. It’s another game that really lends itself to completism. 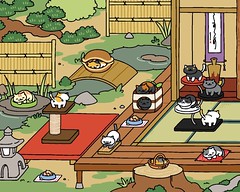 And now we have Pokémon GO. I downloaded it to check what all the hype was about and started playing it like I do most games – I just randomly click thinks and see what happens. I’ve been able to figure out the basics – you create a character for yourself (the game walks you through this part) and then you start walking around and the game uses GPS to show your character on a map. When you encounter a Pokémon, you can throw a PokéBall at it and trap it; if you manage to do this, the Pokémon is registered in your Pokédex (which I gather is a list of all the Pokémon you have caught) and you get points that I don’t know what they are for. Sometimes you catch a Pokémon but it manages to escape from the PokéBall – I assume that these are stronger Pokémon and I need to do something in order to be stronger to catch those one – thought I’m totally guessing on that. Real life locations are PokéStops – places where you can stock up on PokéBalls that you use to catch Pokémon that you encounter, as well as other objects that I have no idea what they do. A building, a piece of public art, or other such location can all be PokéStops – you see them on your map as your wander around and if get close enough to them, then you can stock up on stuff. There are also PokéGyms, which I assume you train at to get better at catching Pokémon, but that’s just a guess because the one time I was at a PokéGym, my game playing technique of randomly clicking things was not effective – I couldn’t figure out what I was supposed to do and then it told me that I lost. I think I may have to actually read about how you are supposed to play this game if I want to go any further with it.

Theme Hospital posted on Wikipedia under fair use.