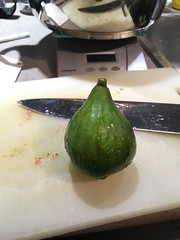 My friends Tig and Pat have a fig tree. A fig tree that produces about eleventy billion figs. And since two people cannot possibly make use of eleventy billion figs, when the figs are ready, they invite their friends over for a big party where everyone eats, drinks, is merry, and those who are daring get to climb a tree to harvest the figs.

So, on Saturday I came home with a bag of figs and the idea that I should make some jam. Of course, I have never before made jam in my life, but no time like the present, right? After a wee bit o’ research on the internets and a trip to Canadian Tire to buy the requisite supplies, I was ready to 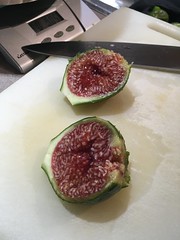 jam. But since I needed to be able to justify the purchase of said supplies, I decided that I should try my hand at a few different jams. And since blueberries and apricots are currently in season1, I picked some of them up at the produce market.

Now, the internets told me that to make fig jam, you just need to cook up your figs, sugar, and lemon juice – no need to add pectin because figs 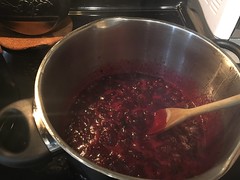 have lots of pectin in their skin. So I followed the internet instructions, and then “processed” my jam2. Then I made some blueberry jam and some apricot jam following the instructions that came with the box of pectin.

Now, the blueberry and the apricot jams gelled up nicely, but the fig jam, not so much – when I checked it the next day, it was sloshing around. More of a fig sauce than a fig jam:

So I went back to the internets, which told me that I could fix jams that hadn’t gelled by dumping it back into a pot, adding more sugar, lemon, and pectin3, and then re-boiling it and processing it all over again4. So I did that and now I have…. thicker fig sauce. The internets tells me that fig sauce is nice on duck and pork, so if anyone wants to have some fig sauce, let me know – I can totally hook you up with that. 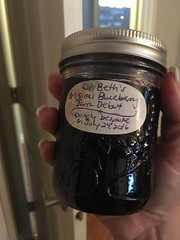 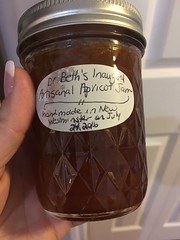 As for the jams, I tasted then yesterday. The blueberry one, imho, is underwhelming. It’s a good consistency, but the blueberry flavour just isn’t that intense. Luckily, I only made two and a half jars of it. The apricot jam, however, I think is much nicer. It’s also the right jammy consistency and the flavour stands out a little more. I ended up having more apricots than I could use in  my first batch, so bought more pectin and made a second batch the next day. But this time I used liquid pectin, just to see what the difference is like. I haven’t tried that batch yet – I didn’t want to have two opened jars of apricot jam at the same time. But I’ll report back once I try it.

Now that I have the canning equipment, I’m kind of excited to use it some more. Blackberries are almost in season and there are tonnes of wild blackberries in the Lower Mainland, so I think I’ll go pic I’m also thinking that homemade jam could be pretty excellent filling for macarons.When the jalapeños from my balcony garden are ready, I’m totally making jalapeño jelly! I also want to make some pickled beets and some spicy pickled green beans.

Anyone else have any other suggestions of things that I could can?