So, Andrew is something of a neat freak1,2 and suggested that perhaps I should clean my algae-adorned frog tank more often than once a century. And while I sort of agreed in principle – i.e, I agreed with the notion that the frog tank should be cleaned, but disagreed with the notion that *I* should personal do any more cleaning than is absolutely necessary. So I have decided to outsource this work to three otocinclus catfish. 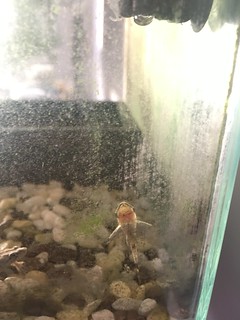 One of my three new ottos

These little guys are algae-eaters who can happily co-habit with Tyrion Froggister, Copernicus the Third, and Timbit.

The only thing they need now are names. My initial thought was to call them Gastly, Haunter, and Gengar, but I feel like it’s a little too trendy and once the PokéCraze is over the names will seem dated. So if anyone has ideas of a better trio after whom to name them, I’m willing to take suggestions3 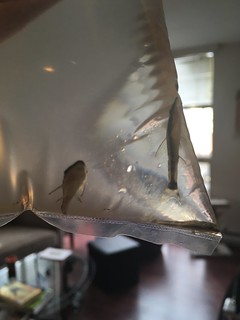