In the Pokémon game, you get 250 storage spots for all the little pocket monsters that you catch (or hatch or evolve). But when you live and work in heavily Pokéstopped areas, you end up catching lots and lots of Pokémon – way more than 250, though lots and lots of them are multiples of ones you have2. Since the objective of the game is to catch each different type of Pokémon, you need to have enough room in your inventory to store all the different types, but given how often you just keep catching the same type you already have, you quickly run out of space! You can “transfer” your Pokémon to the professor in exchange for candy (which frees up a spot in your Pokémon inventory) but (a) that requires the hard work of tapping icons and words on your screen, (b) many of the Pokémon are sooo cute and I don’t know what the professor is doing to them (but it can’t be good), and (c) my pack rat tendencies. It’s actually mostly (a). I tend to catch Pokémon as I go about my day – walking to the Skytrain station, on the way to the grocery store, etc. – so it sort of fits with the flow of my day, but cleaning up my inventory requires concerted effort just focused on playing the game, and since I’m not typically a gamer, this is not something I’m used to. Once you fill up your storage, you can’t catch anymore Pokémon until you either transfer some out or pay money for more storage spots. This is where my cheapness overtakes my laziness3!

I mostly do my Pokémon inventory management on my Skytrain ride. I sort the Pokémon by name so that I can see which ones I have multiples of, check out which one is the most powerful (or which two if I’m keeping an extra one around to evolve4.), and then transferring the superfluous to the professor. It’s a lot of work! Also, while doing this important work, I’m often interrupted by my phone vibrating, which signifies that a new Pokémon has spawned where I am so I have to get out of my inventory box and go catch it. Since my Pokémon are sorted alphabetically by name, I often clear out my extra Caterpies and Drowzees, but less often get to my Spearows and Zubats. Case in point, I seem to own all of the Tauroses5: 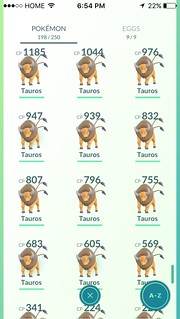 Or I did. After I took that screen shot, I transferred a bunch to the professor and now I have a tonne of Tauros candy – I used as much of the candy as I could but apparently cannot power him up anymore until I become a stronger trainer.

In addition to my Pokémon storage, I also have a limited inventory for carrying around items in your bag – Pokéballs, Megaballs, and Ultraballs used to catch , plus Revives and Potions used to heal your Pokémon after you force them to fight at a PokéGym6. This used to be a problem for me, as my I kept getting messages that my bag was full – again, you could pay for a bigger bag, but I’m way too cheap. I often throw out Revive and Potions, because I don’t fight at PokéGyms that much, so I’d rather have room for more balls7. But in the past week or so I’ve found that not having enough inventory room is not my problem – my problem has been that I keep running out of PokéBalls! Which is probably because I keep running into situations like this one: 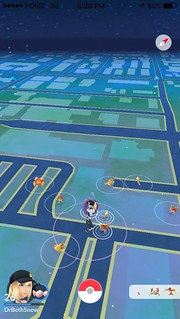 I ran into this gaggle of Pokémon outside my pet store when I went to buy food for the kitties. I ended up catching 11 Pokémon in a row there! Hence why I keep running out of Pokéballs!

So, yes, it seems it’s feast or famine when it comes to PokéInventory – either too much or too little. Inventory really is evil.