When Watson & Crick went to the vet a few months ago (because Watson had an irritated eye), the vet noted that they both had a fair bit of tartar and some gingivitis, so she recommended a cleaning1, but noted that because February is pet dental health month, I’d get a discount if I brought them in this month. So yesterday we went off to the vet’s office for their first dental cleaning2. In order to do a dental cleaning, cats are put under general anesthetic3. Prior to this visit, I’d had to take Watson in for an ultrasound of his heart, as he has a heart murmur4, but the vet said he was OK to get the general anesthetic.

Happily, both kitties did just fine under the anesthetic, but while Watson just needed the cleaning, poor Crick needed some more extensive work. Apparently one of her front canine teeth5 was fractured! The vet said that it can happen from a cat running around and crashing into stuff or sometimes just from jumping and landing too hard. And Watson does like to chase Crick around, so I could totally see her knocking into something as she was running away from him6 She also had a resorptive lesion in one of her premolars – basically, there was a hole in the enamel that is just asking for bacteria to get in and cause an infection. The lesion was just below the gumline, so you wouldn’t be able to actually see it. Both of the bad teeth were on the same side and the vet said that you could see there was more tartar build up on the opposite side, meaning that she’s been eating her food on that side of her mouth because her bad teeth were probably hurting. So poor Cricky required an extraction of the canine and a crown amputation of the pre-molar.

Since the kitties had been under general anesthetic, they spent a few hours in the vet’s office to recover. Watson had his cleaning first and apparently once he woke up he was distraught and inconsolable until he saw Crick. I’m not sure if he was just scared to be alone in an unfamiliar place while he was feeling all weird from the anesthetic or if he was worried about his sister. He is a scaredy cat, so it was probably the former. 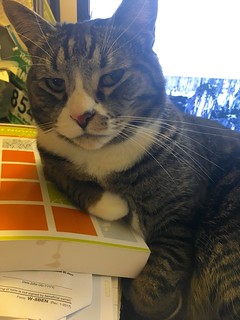 The cats each had a different reaction to the anesthetic. Once Watson had calmed down because he could finally see his sister, he had the typical reaction of just wanting to sleep. Crick, on the other hand, was bouncing off the walls. Even when I picked them up, Watson was just chill in his cat carrier on the way home (he usually spends the whole time in his cat carrier crying about the injustice of being in a cat carrier), but Crick was super fidgety. When we got back to the condo, both cats were happy to home, but were very upset with me for not feeding them immediately. They hadn’t eaten since dinner the previous night (since you have to fast before you go under anesthetic because anesthetic can make you barfy) and they weren’t allowed to have food until 8 pm so that all the anesthetic would be out of their system, and we got home around 4 pm. The cats spent a lot of time standing around looking at their empty food dish and then going to the kitchen to stare at the cupboard where I keep their food. 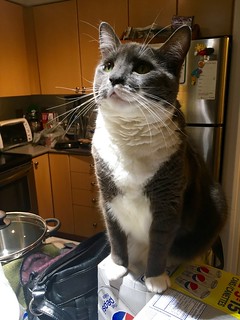 Crick also has drugs she has to take for the next few days. Buprenorphine (an opioid for pain) and metacam (an anti-inflammatory). Her first dose of metacam isn’t until tonight, but she has to take her opioid every 12 hours and she absolutely hates it! I have these little pre-filled syringes that I have to squirt in her mouth, but she tries to keep her mouth shut and hide her head in my lap. I try to tell her it will make her feel better, but she just wants to say no to drugs. Fortunately, I can just squirt the metacam onto her food and apparently it just has a little bit of a sweet taste, so it shouldn’t turn her off the food. The trick will be to watch her eat and make sure that Watson doesn’t try to steal her drugged food!

The good news we got at the vet was that both kitties have lost some weight! Both of them need to lose a few pounds – when we were at the vet a few months ago, Watson weighed 12 lbs and Crick was 14 lbs, so I’ve been making an effort to weigh their food so they aren’t getting too much, to take away leftovers (as Crick would feast on Watson’s leftovers – hence why she weighed 2 more pounds than him), and bring out the laser pointer at least once a day to get them running around. When Scott’s over, he plays with them several times a day with the laser pointer, so that’s helped for sure! Watson has lost more weight as he occasionally chooses to eat a bit less and he chases the laser pointer more. He’s down to 10.8 lbs and Crick is now 13.5 lbs.

Anyway, the kitties both seem to be doing well, so while I’m down $1300 (eep!), at least I know that everyone has a healthy mouth!