Does this injury make my thumb look fat?

Three weeks ago (three!), I hurt my thumb. I was playing hockey and I was in screening the goalie and making a pest of myself (as usual) and a defencewoman from the other team knocked me to the ground, catching me off guard and I guess just the way I was holding my stick resulted in my landing directly on the end of my right thumb and it hurt like a mofo. I mean, I continued playing the game, but I couldn’t really use my thumb. By the next day, it was swollen up quite badly and bruised1 and I thought it might be broken, so I called my doctor, whose office is conveniently a block from my office, who had a look at it and said that we should get it X-rayed as it could be a compression fracture (happily, it wasn’t twisted or bent funny, which would indicate a fracture that might need pins in it). So then I walked a few blocks to the X-ray place and within about 10 minutes I had some X-rays done2. The verdict came back the next day – it wasn’t fractured, so I must have (and I quote my doctor verbatim here) “jammed it real good.”

Anyway, that was three weeks ago (three!) and my thumb still freaking hurts. And it’s swollen: 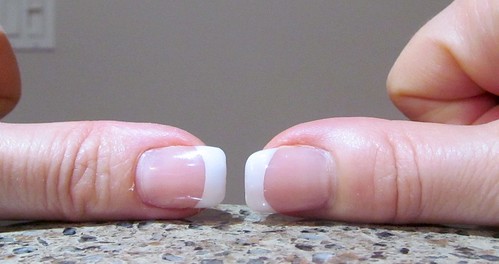 Granted, while I took my next hockey game off (on the advice of my doctor), I did play the one after that and the one after that and then the one after that. And then I played five hockey games in three days3 – I had a weekend tournament, a regular season game, and then got called in as a spare for a friend’s team. And in the tournament I happened to get slashed *twice* directly on my thumb! Also, after the game, there seems to always be at least one person in the handshake lineup who won’t take off their glove to shake hands4 and so when I go to shake their hand they end up jamming their hockey glove directly into my thumb and it hurts like a mofo!

In other hockey news, I broke my hockey stick in my game yesterday. I was battling for the puck in the corner and as I was skating away afterwards, I thought my stick felt funny. I looked down and didn’t see anything odd, but after a few more strides it still felt funny and I looked again and heard a weird noise as I lifted my stick to try to look closer and then I saw it flop a bit. Yikes! I immediately dropped my stick – as a player must drop a broken stick because it’s dangerous to skate around with one – and skated to the bench so someone else with a stick could jump on the ice. Fortunately I had brought a spare stick – as I’m a 5 ft tall person who plays left-handed, there’s not likely to be anyone else who has a stick that I can play with – so was able to jump back out on my next shift. 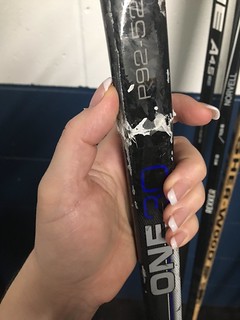 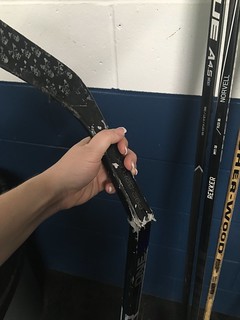 So today I headed out to the Hockey Shop in Surrey5 to buy a new stick. I’ve never bought a stick there before – the last sticks I bought (which were this broken one and an identical one like that – I bought two because they were on sale for half price and my then-back up stick was an old wooden monstrosity) were from Cyclone Taylor in Coquitlam – but I was glad that I did this time because I found out that they have a shooting room in the basement where you can actually test out the stick, which is much better than just flexing it against the ground to see how it flexes (which is what you typically do in a store). The guy in the shop helped me select a few to test out – and also informed me that the stick that I had (as I brought in my spare so that I could get them to cut my stick down to the right size for me) was one that has its flex near the middle, which is more for slapshots. But I don’t really take slapshots6! So he got me one where the flex is near the bottom, which is better for wrist shots and snap shots, which is more what I want to do! I tested out the sticks and the one with the flex near the bottom (which is also a bit lighter) was waaaaay better for me. And so now I’m the proud owner of this Crosby stick: 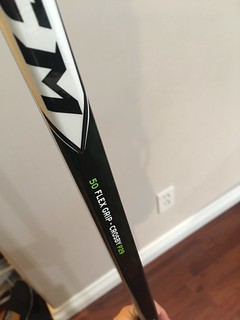 So I’m going to blame my *terrible* statistics for the last few years on my inappropriate stick and I am confident I’ll now be scoring like gangbusters. Playoffs, here I come!