My kobo1, appears to be no longer capable of holding a charge. I plug it in overnight and it seems like it’s charged, but then a few hours later (during which time it isn’t being used) and I see this: 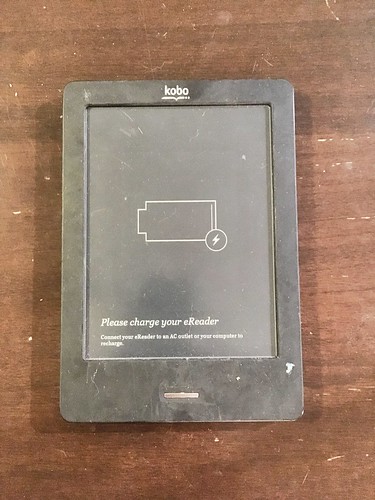 I guess I shouldn’t be too surprised, as it is more than 4 years old and in electronics time that’s like 1000 years old. Plus I’ve not been able to get it to connect to my computer for quite some time now, which means that I haven’t been able to put any new books on it. I was hoping to read the books that I already had on there that I hadn’t yet read though. I’m in the middle of reading The Better Angels of Our Nature: Why Violence Has Declined by Steven Pinker. Though I can’t tell you exactly how far because my goddamn kobo won’t hold a charge. Guess it’s time to start looking at what’s happened in eReader technology in the last four years…