Much like the Plumbing Edition of Stuff I Learned This Year, this is a lesson I’d have been happy not having learned. It all started on my drive home from work on Friday – I was slowing down for a red light on Stewardson Way and my car jerked (sort of like it would if you were driving a manual transmission car and accidentally put it in the wrong gear) twice, and then as I stopped at the red light, it died. Like, it would not start. And I was on a busy road during rush hour! I put on my four-way flashers and called BCAA to get some emergency roadside assistance. Pretty soon, a couple of women came up to my car and asked if I need some help: “We can push your car around the corner and into this parking lot”. A guy from the business whose parking lot they were referring to, Kirmac Collision1, also came out to help push. Since I drive a Smart car, they were very amused at how light it was to push! I was so thankful that they took the time to stop and help me – no one wants to be the car that they talk about on the traffic report: “A stall on Stewardson Way is blocking the right lane, so there’s only one lane getting through eastbound and everyone just wants to be home already!”

The BCAA tow truck driver showed up in about 20 minutes, which is exactly the time the BCAA dispatcher had estimated (and was more than enough time for me to take over the Pokemon Gym that was there), and he was super nice. Here was where I learned the first thing of this adventure: the location of the battery in my car! Now, lots of things in Smart cars are not where they are in other cars – the engine is in the back and the ignition is in between the driver’s seat and the passenger seat, near the gear shifter, for example. Well, it turns out that the battery is located under the foot well on the passenger side! Also there was the tow hook for the car! I’ve never needed to check my battery before – it’s never been a problem. And the only other time I had it towed was when I had a flat tire and that time it was still under warranty, so I had Smart Car roadside assistance still, and they just took care of it. I knew the battery was working, as I could still roll up my windows and the radio was still working, but the tow truck guy tested it, and decided that I would indeed have to get it towed somewhere, because whatever was making the car not start wasn’t something he could diagnosis on the spot.

Now, I’ve never had any trouble with my car before and I’d only ever taken it to the dealership for its regular maintenance (while it was under warranty I had to take it there or else the warranty would be void and once the warranty was up, I just kept going there out of habit/being too lazy to find an alternative). Smart cars are sold at Mercedes dealerships, so you know that there is going to be a bit of a premium on their prices. But I really wasn’t prepared for how bad it would be!

First, when I called the dealership to say I was going to have my car towed there, they said it was no problem even though they would be closed for the night, the driver could just drop off the car and put the keys in an envelope with my name and number on it through the drop spot they have for just such occasions. However, the next day when the service guy contacted me, he was all “We have 68 cars with appointments ahead of you, so we can’t even look at it until Monday and I won’t do anything until you approve the $200 minimum fee to diagnosis it. Plus it is due for a major service appointment (replace spark plugs, belts, oil, etc.) and that costs $970. So with have halted everything until you approve the fees”. My first thought is “why is he making a big deal that other cars have appointments. My car died with no warning. Sorry I didn’t make an appointment for that!” And my second thought was “why would I approve $1000 of maintenance if I don’t know what is wrong the car? What if it isn’t even fixable and they just do all that maintenance on a car I’m going to throw away?” So I said I’d pay the $200 diagnostic fee, but not approve the maintenance before I knew what was wrong with the car. 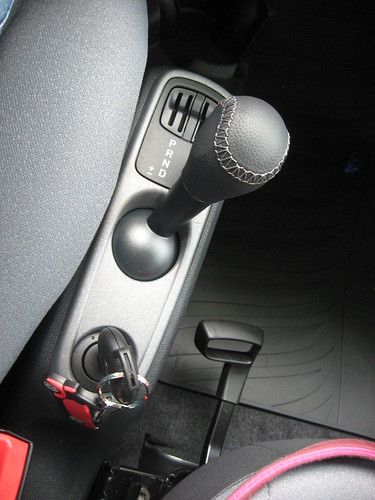 On Monday, they contacted me with a diagnosis – the clutch actuator motor had died – and an estimate – $900 for the part, $800 for labour (including the $200 diagnosis fee). So in total they wanted $2700 + tax to fix my car, which is 8 years old and only worth about $4000 (if it weren’t broken!). So this made me an unhappy camper because I have a lot of more exciting things that I would want to spend $2700 + tax on, such as anything else. I would rather spend that much on pretty much anything else. Also, they would have to order the part of Toronto and it wouldn’t arrive until Friday, and that’s only if they placed the order that day (i.e., trying to pressure me to make a quick decision!).

So this is the major car part thing that I learned: what the heck is a clutch actuator motor? I knew what a clutch was from my years of driving manual transmission. When you drive manual, you step on a clutch pedal, which allows you to shift gears (or to start the car moving from a stationary position) – basically, stepping on the clutch pedal disconnects the running engine from the turning of the wheels so that you can shift gears; then you release the clutch pedal, which allows the engine to continue turning the wheels with the car in the new gear you’ve just selected2. However, Smart cars don’t have manual transmissions – they have something called a Tiptronic – with this type of transmission, you can shift the gears yourself, but you don’t need to step on a clutch pedal and if you fail to shift correctly, the car will just shift it for you so that the car doesn’t stall. In the photo above, you see that there is Park, Reverse, Neutral, and Drive, which in an automatic car and you can just drive your Smart as an automatic using those. If you want to do the shifting yourself, when in Drive, you push the stick over to the left (where the + and – are) and then you push up (towards +) and release to shift up or down (towards -) and release to shift down. I did this when I first got my car, but it just wasn’t as satisfying as driving a real manual, so I’ve driven it as an automatic after about the first month of owning. Anyway, the clutch actuator is a part that basically takes the place of the clutch pedal that you would step on to change gears in a manual transmission car. So, the fact that the clutch actuator died and was making my car not work was like insult to injury –  it’s a part that my car has because of a feature I don’t even use!

Anyway, I called a friend of mine who is into cars for advice and he said, “They are likely charging you a Mercedes tax. I know this other shop run by a good guy – they know their stuff and they are straightforward and charge fair prices.” So we contacted them and they gave me an estimate for all the same work (replace the clutch actuator and do the full maintenance service): $1200 + tax! So basically Mercedes was trying to fleece me out of $1500! So I called them back and said I would not be having them do anything more with my car – I would pay their $200 diagnosis fee and then have a tow truck come to take it away. He said it would take some time to put my car back together and he’d call me when it was ready. And then he called me back shortly after, said he’d talked to his manager, and since I’ve been such a good customer, they wanted to know what I was planning to do with the car3. I said that I was taking it somewhere else to get it fixed, where they are charging me a reasonable price and where they can get the part tomorrow, not Friday. He asked what the other place was going to charge me and when I told him, the guy says that because I’ve such a good customer4, they can match the price for replacing the clutch actuator ($1000 for parts & labour, instead of $1700), but he didn’t believe that the quote of $200 for maintenance (vs. Mercedes charging $970) could be right. “Are you sure it’s a full maintenance, with spark plugs and belts and everything? Are you sure it’s not just an oil change?” And I was sure, because I’d sent the shop the list of what was included in the list of things for maintenance. But he was all “nope, we can’t drop the price on that”5. And then he also dropped in that “We’ve found the part locally, so we can have it by today instead of 5 days from now”. At this point, I was just pissed off, and I said, “Well, if you can drop the price of replacing the clutch actuator almost in half, just like that, now I just feel like you were trying to fleece me! And that’s a very interesting coincidence that all of a sudden you found the part locally, once I told you that I taking it to another shop! I’m taking my car – please tell me when you have it reassembled so I can tell my tow truck driver it’s ready.”6

So that was Monday. They didn’t have my car reassembled until the next morning, but I got a tow truck to take it to Deckers Auto in Burnaby, who had the car fixed and all the maintenance done in about 24 hours, and the cost was right on what they’d estimated! And to put a cherry on top, when I got there, the guy was super friendly and helpful, he showed me the parts that had been replaced and explained what was wrong with them, and basically treated me like I was a person capable of understanding information about cars (which many mechanics do not do when they speak to women.). He also told me that my car is in great shape, so I shouldn’t have to worry about it for quite some time! I was just so pleased with their service and I will be definitely going back to them for all my maintenance from now on. If you are ever looking for a great auto shop, I highly recommend them!

Reflecting back, I have a lot of people to thank for helping me out in this situation:

Here’s a video of how a manual transmission works, in case you are interested: