A bunch of stuff I cooked

Ever since I posted about my progress on my goals for 2019 (or lack thereof), I’ve been on the look out for new foods to make. Last weekend I made:

And this weekend I decided that I should make something to use up the some of the fresh herbs that are growing my balcony because they are growing like crazy:

My friend Karen suggested this recipe: Smashed potatoes with herb vinaigrette. Smashed potatoes are one of my go-to recipes, but I usually put apple cider vinegar with salt and pepper on them. So I was intrigued by this recipe, where you make a vinaigrette with a tonne of fresh, along with olive oil, lemon juice, chili peppers, and Dijon mustard.

Here’s the smashed potatoes, prior to the vinaigrette (basically, boil little potatoes until you can stick a fork in them, put them on a cookie sheet, smash, drizzle with oil, and bake):

And I found this recipe by the power of Googling: Fresh Herbs With Corn, Asparagus, and Chickpeas Recipe. Though this recipe called for a slightly different mix of herbs than the other recipe, I’m lazy, so I just chopped up a big bowl of thyme, parsley, mint, and oregano1, mix it with olive oil and lemon juice, and then split it in half and used it with both recipes (with the addition of the Dijon and chili peppers for the potatoes).

And those two dishes comprised my dinner tonight. Super delicious.

Also, while uploading these photos, I discovered a photo of avocado toast that I made on June 25. I’d never made avocado toast before, so that totally counts as a new thing! 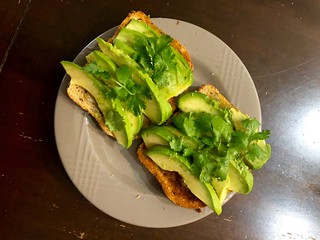 So that brings me to a total of 10 new things that I’ve made this year (out of a goal of 19 new things), and since it’s July, that’s about right on track. I’ve also tentatively invited a couple of people over for dinners (for my goal of having people over for dinner 5 times – pending me sorting out my calendar to figure out when such dinners could occur), so that will be an opportunity to make new things too.

Also, I’m going to put the other suggestions I got from people about things I can make with my herbs here, because right now they are scattered between Twitter, Facebook, and Instagram replies and I’m totally going to forget what they all are and they’ll get lost down the memory hole that is social media if I don’t post them here.

From my friend, Linda:

From my friend Paul:

From my friend Stephanie:

From my friend Cath:

From my friend Nancy:

So I’ll think I’ll be just fine for using up those herbs!