For the second weekend in a row, I was spoiled with visitors!  Sarah, Dave and Teddy came to town on Friday and spent the whole weekend here before leaving on their cruise down the Pacific coast today.

After I got home from work on Friday, Tod and I met up with them at their hotel room.  Teddy, trooper that he is, managed to stay up ’til 7 p.m. Pacific time, even though that’s three hours later than his normal bedtime (due to the time zone difference) which meant (a) we got to meet him right away and not have to wait ’til the next morning, (b) we got to see him a bit before he went to bed and (c) he was pretty quickly onto Pacific time for his trip.  And he was as smiley as smiley can be!  Now, I’d like to say that he was smiley because he just took such a shine to his Aunt Beth, but he is honestly the happiest kid I’ve *ever* met!  His smile is huge, adorable and always there!  Poor little guy was teething and he was still smiling most of the time!

After the Tedster hit the hay, Sarah, Tod and I grabbed some dinner at the Twisted Fork1, while Dave generously stayed back at the hotel with T. To that Dave for his generosity, he was rewarded with poutine from Fritz. Mmm, poutine.

Saturday brought us across the Burrard Inlet to the lovely city of North Vancouver to visit Sarah’s friends Deepa and David and their baby, Soji.

Sarah, Teddy & Aunt Beth on the SeaBus.  Most smiley baby ever!

Deepa made a wicked delicious lunch for us and we had tonnes of fun meeting Soji and catching up with Deepa & David, who I last saw the last time Sarah was here, when both she and Deepa were preggers. Baby Soji has the biggest eyes of any baby I’ve ever seen!  So freaking adorable!  It was absolute baby adorableness overload (in a good way!)

Saturday evening brought us back to Sarah & Dave’s hotel for T’s bedtime and some takeout sushi.  There are many reasons I’m proud to be a Vancouverite and one such reason is our ridiculously good sushi that comes at ridiculously cheap prices.  Mmm, sushi.

Sunday was filled with brunch at the Flying Swan2, a quick trip to Granville Island in a futile attempt to buy cans of Granville Island Brewing’s Maple Cream Ale since Sarah was unable to find it in cans at the Liquor Store3, and the arrival of Sarah’s parents4.  In the evening, Dave, Teddy & Sarah’s parents headed to Stepho’s for dinner5 while Sarah and I headed to my hockey game.  I’m so glad that Sarah was willing (and able!) to come to watch me play hockey. Most of the people I play with are from Vancouver and so other players’ family come to watch their games and it always makes me a bit wistful because my family are so far away. So to be able to have Nancy, Jeff & Madeline watch me play last week, and Sarah watch me play this week, was a real treat for me!  Unfortunately, we couldn’t pull out a win, but we did play really well6.  After the game, Sarah and I went to the Naam, as Sarah has been to the Naam on all of her previous trips and needed to keep the streak alive. Also, it was 9 p.m. by that point and we hadn’t eaten since lunch.  We both opted for the cashew & avocado burrito.  Mmm, burrito.

And then, almost as soon as they arrived, they were off!  I’m so happy that they came out to spend the weekend with me before their cruise and I’m super stoked to have *finally* met Teddy!  Hope you guys are having a great cruise!!

A Month of Babies

For me, September is going to be a month o’ babies.  First up, I’m babysitting my friends Clayton & Jodelene’s baby next Saturday while they go to a Sarah McLaughlin concert.  Mason is six months old and so so so so cute!  I’m really looking forward to hanging out with Mason for the afternoon.

The next weekend brings Sarah and Dave and their baby, Teddy, to town from Ottawa.  Teddy is seven months old and so so so so cute! And I’m the worst aunt in the world, ‘cuz I haven’t even met Teddy yet, so I’m ridiculously excited to finally meet him!  While they are here, we are also going to meet up with Sarah’s friends Deepa and David and their baby, Sarojini. I’ve only seen a couple of photos of her from when she was born (so so so so cute!) and she’s about five months old now so she’ll be sooo much bigger than those photos.

And then the weekend after that my sister, her bf and my neice are coming to visit.  And, ok, my neice is almost five years old, so she’s not exactly a baby anymore. But she’s always be my little baby!  And I’m super duper excited to see all of them. And to take Madeline for a drive in my Smart Car!  Also, they are going to come and watch me play hockey. Yay!

Welcome To The World, Teddy!

Congratulations are in order for Sarah, the Resident Historian and Chief Political Correspondent here on Not To Be Trusted With Knives, and her husband, Dave, who welcomed their son, Teddy, to the world on Jan 20!

I’ve seen a few pictures and have to say that he’s pretty damn cute.  Also, he looks just like me when I was born1 . Which totally makes biological sense. I mean, I’m his Aunt Beth2, after all. 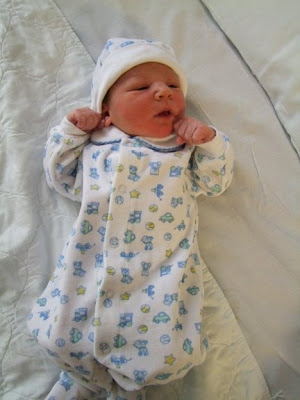 On the left, Teddy, in a photo I stole off Dave’s blog. On the right, me, a mere 32 years, 11 days ago.
1Yes, I realize the arrogance of that statement. I have a category of rampant narcissism for a reason, you know!
2where “Aunt” = honorary aunt as we are in no way genetically related.

It seems like everyone I know is having a baby.  My cousin, Andy, and his wife, Cristine, just had their second a few weeks ago.  My cousin, Lori, and her husband, Eugene, are expecting their second any day now (theirs was due Nov 8).  My good friend (and resident historian), Sarah, and her hubby, Dave, are expecting their first in January.  Then her friend Deepa, and her husband, David, are due in February. And then my friend Clayton, and his gf, Jodelene, are having one in March.  (Interestingly, Sarah & Dave refer to their wee one as “humpy,” while Clayton & Jodelene’s is known as “bumpy.”  No relation.)

And my blog friend (my bliend?) Stacia is having a baby.  Like right at this very moment, as I type this, she is having a baby!!  How freaking exciting is that??  Stacia & Wes – best wishes for a safe and quick delivery. Can’t wait to see photos of your little Navy Bean!

#1 My cousin, Lori and her husband, Eugene, had actually had their baby when I original posted the message.  Little Beatrice Dale Anne, a baby sister for Imogen, was born at 8:30 p.m. on Nov 10.  Everyone is doing well.  I’ve gotten pics via email, but I’m sure they will put some up on their picture blog soon and then I can link to those.