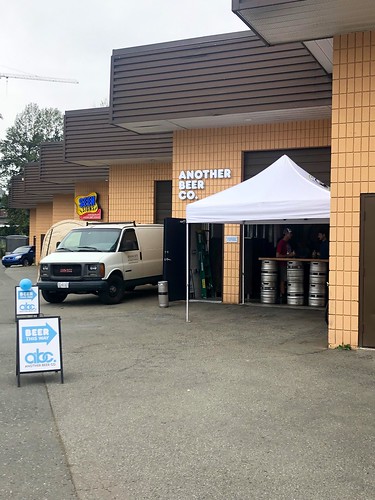 Another Beer Company opened up in New West this week. Like, that’s the name of the company. You see, we had one beer company in New West before this – the amazing Steel & Oak – and now we have another beer company.

This company has been in the works for quite some time, as beer companies have to do, what with all the finding of a workable location, doing renos, getting permits and so forth. Not too long ago, I joined the ABC Original Patrons, where you give them $250 and you get a $250 gift card, a hoodie, invites to exclusive patron parties, and glory.

Of course, the soft opening for patrons happened when I was out of town, so I went in today to check out the place and pick up my swag. It’s quite a small brewery – see the little black machine in the picture below: 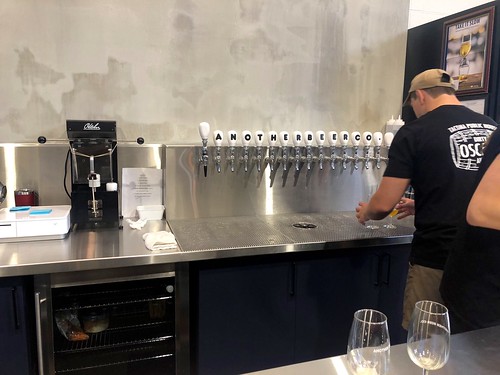 That’s the device they use to hand can their beers. Seriously, they can their beer BY HAND. Right now you can only get tasters at the brewery, as they are waiting for their lounge license to come through, and then you’ll be able to go there and have a pint. But not a growler fill, as apparently they don’t make enough beer to do growlers.

Another cool thing about this brewery is how you get there. It’s located in the Braid industrial area of New West, which is where there is industrial space for such things as breweries. It’s a bit tricky to access and if you don’t want to drive there, up until recently you’d have to risk your life running across a very busy road where people drive very fast in order to get to that area.

But now Translink has opened up what was formerly a fire exit at the Sapperton Skytrain Station to be a regular exit, so you can take stairs down from the the Skytrain platform to the Braid industrial area. And even if you haven’t ridden the Skytrain and are just walking there, you can tap into the station and then tap out of the station at the bottom of the stairs and you won’t get charged.

When I went there today, this sign was on the door at the bottom of the stairway: 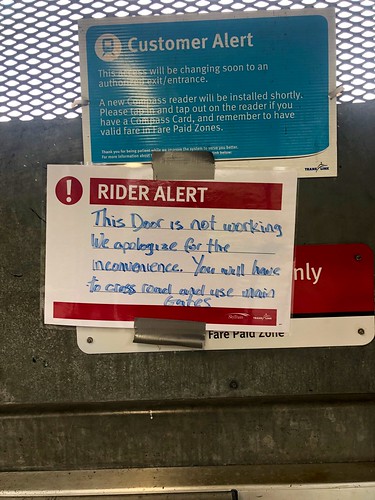 But I just pushed the door open and it was totally fine. And today would have been my dad’s 74th birthday, so I am yet again honouring his memory by ignoring a sign and going through a door that says “do not go through this door.” Wish my dad was here for me to tell him this story.

Anyhoo, I made it to the brewery, safe and sound, picked up my swag, enjoyed a couple of tasters (my favourite was the Belgian saison), ran into a couple of people that I know (because New West), and all-in-all, it was a lovely Sunday afternoon.