Can you believe I’ve had my kitties for FOUR YEARS? I totally thought it was just three, but when I went to get the link to the blog posting from when I got them, I saw that it was FOUR YEARS AGO! So I’ve had these little fuzzballs for more than half their lives. Well, if you count in conventional years. If you count in cat years, I’ve not had them that long, because according to the Internets, cat years work like this: their first two years of their life = 25 years, and every year after that = 4 years. When I got them, they were 2.25 people years, which is the equivalent of 26 years old in cat years. And in the 4 people years since then, they’ve only aged 16 cat years. Cat math is weird.

At any rate, every day I’ve had these cats has been the best. They are so loving and so funny, and even though Watson can be an asshole sometimes and Crick will claw the shit out of you if you piss her off, I wouldn’t change a thing about them. Best. Cats. Ever. I mean, look at these guys: 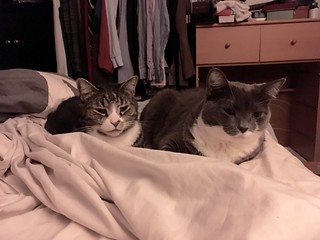 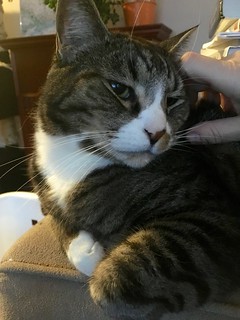 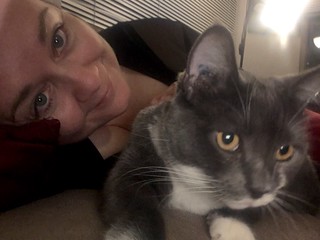 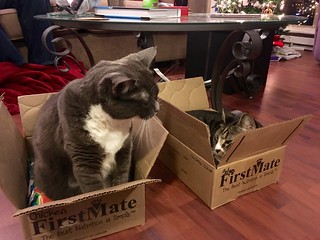 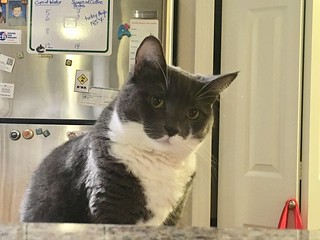 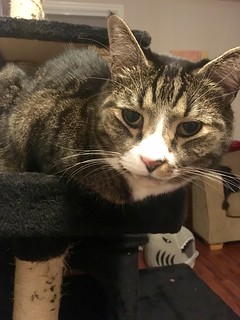 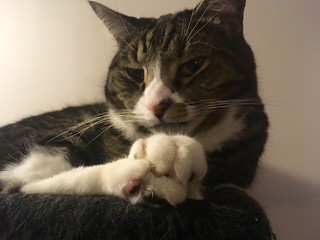 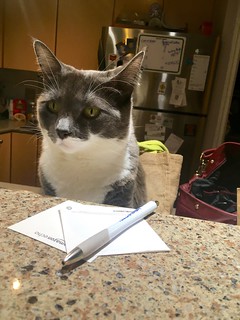 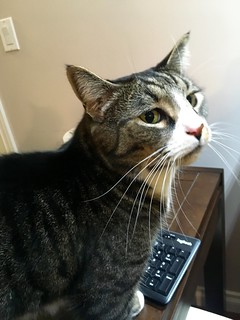 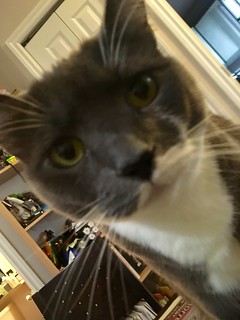 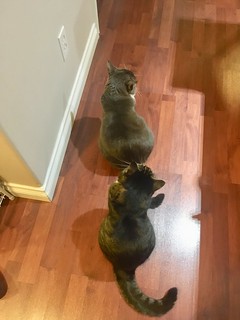 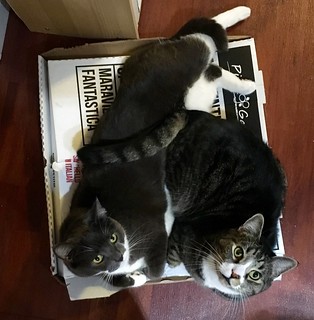 I love you, my little muffins!

After meals, Watson and Crick often clean each other’s faces. Crick is much better at the task than Watson is, but he tries.

Before I went to visit my family, my sister Facebooked something adorable my nephew had said. She’d told him that it was time to go to Vaia’s (Vaia is the lady who runs the daycare that Thomas goes to) and he told her “I am not going to Vaia’s. I am going to a meeting. I am big”1. Apparently this is a strong association in his mind, as he told me the same thing the other day. “I am big. I am going to a meeting.” I was unaware that being big is a pre-req for going to meetings. I’m surprised they let me in.

When Jeff suggested that we leave some carrots out for the reindeer on Christmas Eve, along with the cookies for Santa, Thomas told him, “No! Carrots are for bunnies and I don’t like carrots!”

And in other vegetable-related shenanigans, Thomas calls potatoes “tomatoes”, so at dinner the other day, Jeff was trying to teach him the difference, since we had both vegetables in our meal. The conversation went something like this: A delicious bowl of mashed pa-tomatoes!

So I spoke to someone at the pet store to see if I could figure out why all my frogs keep dying1 and the leading theory is water temperature. Since frogs are cold blooded creatures, they can’t create their own body heat and if the water temperature gets too cold, their metabolism slows down, they can’t heal as well, etc. Which seems to fit with the pattern I’d been seeing – when I first got the frogs, they’d be all peppy and active, but over time they would seem to get lethargic and then start dropping off. Also, my initial fraggle, who all lasted quite some time, were purchased in the summer, when my apartment is always hot, and the deaths tended to occur in the winter, when the temperature in the apartment drops significantly at night.

So, with this as my working hypothesis, I purchased an aquarium heater, which is essentially a bar that is suction cupped to the inside of the tank, with a bit sticking up out of the water where the cord for it is. It’s set to keep the tank at a minimum of 26 degrees C – if it gets hotter than that, it shuts off (and it’s OK for the temperature to be warmer than that, as the frogs like the heat). I also got them some live plants as a place to hide and to help maintain water quality.

As well, with the last fraggle, I had come up with a better solution to my frogs escaping problem than the ghetto-looking saran wrap “solution” I’d been using previously. Instead of this: I now have a new frog tank lid that’s actually built for this tank (which I hadn’t noticed at the pet store previously): So I bought a new fraggle of 5 frogs, which I brought home from the Yaletown pet store on the Skytrain: Sadly, one frog died after only a couple of days. When I first got the frogs home, I noticed this one guy who wouldn’t stop sitting on top of the heater: I told him that he was going to dry out if he kept doing that (as he was entirely out of the water when he was sitting on top of the heater and these aquatic frogs cannot be out of the water for more than ~20 minutes without drying to death), but he didn’t listen to me. I was hoping he’d have the good sense to jump back in the water when he was feeling dehydrated, but I don’t think he did, as when I came home from work I found him floating dead next to the heater. Poor little guy wasn’t even around long enough to get a name! 🙁

The other four frogs, however, are thriving2. I’ve decided to name them:

The only one I can differentiate so far is Raspberry, as she’s the palest one4. I’m sure once I get to know them better, I’ll be able to tell them apart.

And now, some froggy cuteness! Today was a baby shower1 for my friends Clayton & Jodelene’s baby.  This is what I got for him: I <3 baby clothes with Canucks logos on them. So. Cute.

1Or, as I like to call it, baby warming party.