As previously mentioned, I recently started taking some hockey lessons, because apparently 2 years of MBA school on the weekend got me addicted to learning stuff on Saturday mornings. The lessons are going great – the coach is excellent at breaking skills down into easy-to-understand parts and because we only have 5 people in the class (and not everyone shows up to every class), we get to do lots of reps of the different drills. Repetition is very important to learning new skills – you have to do something enough times that it’s just hard-wired into your brain and you aren’t thinking about it anymore1.

Well, apparently I’m not content with just learning stuff on Saturdays mornings. Because, as you may recall, my MBA classes also included Friday nights2. And, as I’m sure you’ve guessed by now, I’ve signed up for a Friday night class. Starting this week, I’m taking beginner’s salsa dancing lessons.

This will be me soon: 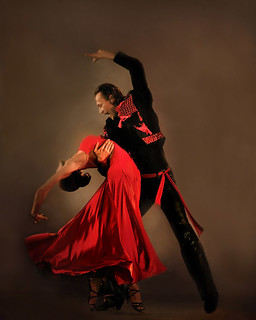 And while I’m re-purposing old photos here on ye ole blog, I think it’s time to bring back this one: 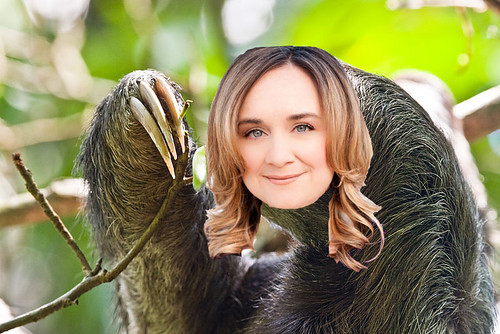 I have been such a sloth of late. I started the year off well – I went from the running study right into training for the Hollywood Half Marathon right into the BMO 8 km right into training for the Scotibank half marathon. And then I stopped running. Entirely. If it weren’t for a couple of bike rides to work recently and the fact that I’ve been playing hockey once a week this summer, I think I’d just be a giant puddle of formlessness due to my slothitude.

I can point to a lot of reasons for my lack of running, including my many vacations and the fact that I was spending time on real estate wheeling and dealing and packing and moving and unpacking and getting a new job and the extreme heat wave sucking up any scrape of energy one might have and, quite honestly, being a little bit bored of just running. But that’s not what’s important now. What’s important now is what I’m going to do to get rid of Sloth Beth. Because being Sloth Beth doesn’t feel as good as being Athletic Beth.

Next up, I need to sign up for a race. Because I know that if I’m not training for a race, I just don’t hit the pavement. I noticed that my friend Julie tweeted about signing up for the Night Race – where you get to run around Stanley Park (either 5 km or 10 km) in the dark and you get a free headlamp. And you know how I feel about free stuff. I’ve wanted to do that race for a while, but the past two years it has fallen on a night when I had MBA class, so I wasn’t able to do it. Seeing that I don’t have MBA classes any more – well, there’s no reason not to! I’m going to check in with my work running buddies1 on Monday to see if they’d be up for doing this race with me!

As well, I’ve been thinking really seriously lately about doing a triathlon. Doing so much running over the first half of the year has caused me to crave a little variety and I think a triathlon is just what the doctor ordered. My friend Candace is a triathlon veteran, so I have plans to meet up with her to get some advice on what triathlon I should do and how to start training!

I also took a look at my physical activity tracking spreadsheet – because you know how much I love a good spreadsheet – and discovered that though we are 63% of the way through the year, I’m only 57% of the way to my goal of running 800 km this year2. So I’m behind, but not so very behind that I can’t catch up. This makes me feel a bit better about my ability to recover from this slothiness – I’m not too far gone!

I’ve now got it in my calendar that I’m going to bike to work two days next week and I have at least one hockey game – two if we win our game on Wednesday3. I’m going out dancing with Kalev tonight4 and tomorrow I’m going salsa dancing, so I think I’m doing all the right things in terms of getting rid of that pesky Sloth Beth!

Proof That Not Everyone In Sweden Looks Like the Sedin Twins