The Long and the Short of It

OK, this was from a while ago, but I found it amusing, so I took screenshots with the intent to blog about them and then got too busy to blog anything for months. To put this in perspective, back in October, the World Health Organization (WHO) caused a stir when they published a monograph linking processed and red meat to cancer. The media, as they often do, oversimplified what the report actually said and people went into a frenzy saying things like “meat is as bad as smoking” and then other people tried to explain what the evidence actually meant (which definitely is not that meat is as bad as smoking when it comes to cancer). If you are interested in reading a long and detailed description of all of this, check out this posting on Neurologica. But for a short (and even shorter version), check out these two postings which appeared back-to-back in my Facebook feed. The first one is in two screen shots, because it was pretty long (for a Facebook posting): 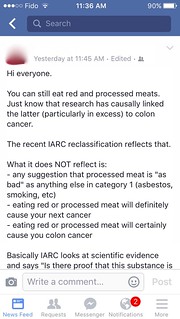 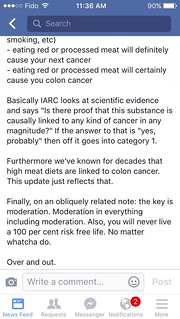 Which was then followed immediately by this one, which made me laugh: 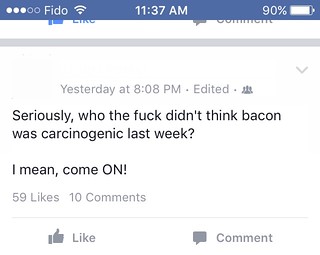 Is it just me, or does this sound dirty?

The Internets Knows Everything

So the other day I was complaining on the Twitter about how Outlook doesn’t remind you if you forget to attach the document you intended to attach to an email the way Gmail does. (I have to use Outlook at work.  Not of my own free will.)  And since my tweets automatically post to my Facebook status, someone I went to elementary school with 20+ years ago saw my lament and pointed me to this posting on Lifehacker.  And now I will never ever send an email without its associated attachment again!

For those of you following along at home: