And speaking of stuff I learned through books I read: this year I learned about home canning!

Last year, I made some jams. But this year, thanks to a book that my friend Linda gave to me, Foolproof Preserving: A Guide to Small Batch Jams, Jellies, Pickles, Condiments & More

, I actually learned more about the science behind making jams, jellies, and pickled things. This also allowed me to add seven new food items to my list of new food items that I made in 2017 (this year’s goal was to make at least 17 new food and drink items that I’ve never made before): 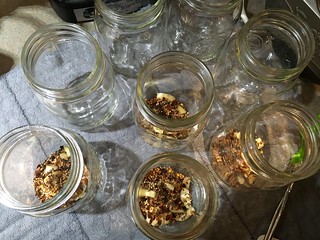 Scott and I just opened a jar of the pickled beans yesterday and they are super tasty, if somewhat sour. I gave Kalev a jar of the jalapeño jelly, but haven’t tasted it yet myself. The raspberry jam, of which I made a tonne thanks to buying an entire flat of raspberries at one of the local farms, has been enjoyed by many as I’ve given it out to a number of people. The pickles and beets and figs have yet to be tested.

There’s still a number of things that I want to try canning – blackberry jam comes to mind as, for the second year running, I failed to go out blackberry picking again this year. But that book has a number of other cool recipes that I’d like to try, such as peach-bourbon jam, mulled cider jelly, red pepper jelly, pickled carrots, pickled asparagus, roasted tomato-lime salsa, spiced figs in syrup, Dijon mustard, and applesauce. Not in the book, but which I want to try: plum sauce. Looks like I have a good list of potential new food items to make for my 2018 goal of making 18 new foods that I’ve never made before! 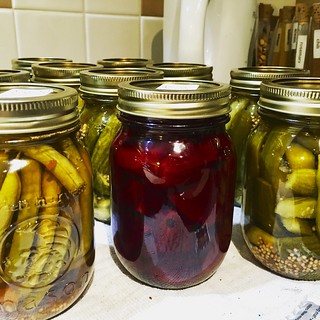