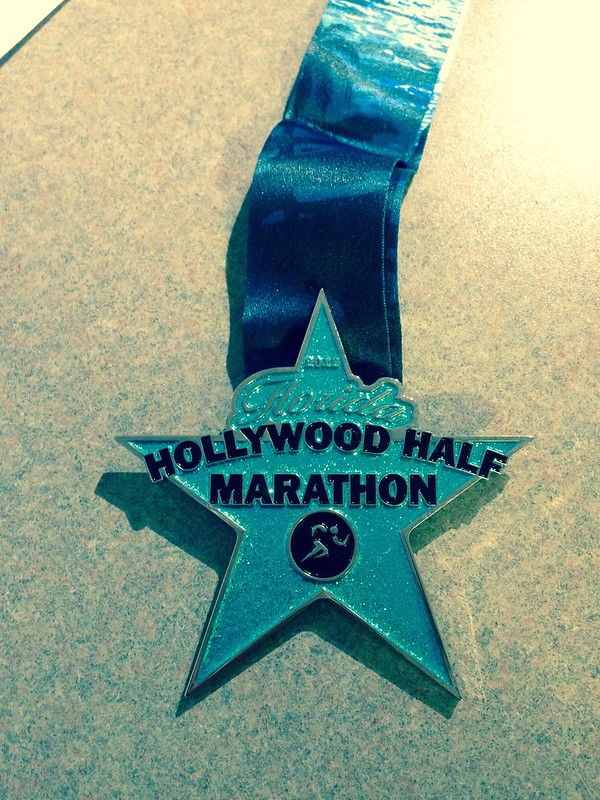 BMO 8 km – Another Day, Another Medal 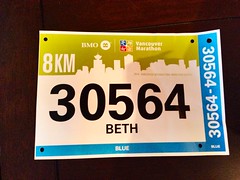 Also, as you may recall, I discovered that by running the 8km race at BMO, you get a nearly identical medal to the one that the half and full marathoners get1, but you only have to run 8 km! So for running only 38% of the distance of a half or 19% of the distance of a full, I can get practically the same medal. Clearly, it’s a much more efficient choice.

The way the 8 km was set up this year, we started in Stanley Park along the half marathon route such that we ran the last 8 km of the half marathoners’ route. But the actual start line was on a side street that joined up with their route, so our race was actual 8.15 km, as we had 0.15 km along that side street first. The finish line was over by Burrard and Cordova and that’s where the gear check was, so they had shuttle buses to take the 8 km runners from the gear check to the start line. The last shuttle bus was at 8:30 am and our race wasn’t until 9:30 am, so it meant we had to start around for an hour waiting for the race to start. In the pouring rain. Had it been a nice day, I might not have minded, as standing in Stanley Park on a sunny day cheering on the half marathoners as they ran by would be fun. Standing around in the pouring rain and cold was less fun. But eventually our race started and by that time it wasn’t raining that hard any more, so for our race, it was actually just a gentle rain, which is actually quite nice to run in.

My partners in crime for today’s event were two of my coworkers, Geoff and Christina. Here we are before the race – looking surprisingly happy for three cold, wet people! 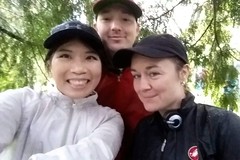 The race itself was pretty good – the route is mostly through Stanley Park, so it’s quite beautiful and once I was running, I totally warmed up. I was pretty happy with my finish time:46:522! It’s my second best time ever for an 8 km race3. Other fun stats: 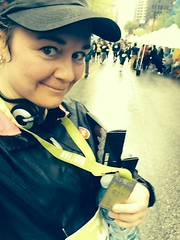 Here are my co-workers and I after the race, proudly displaying our hard earned medals! 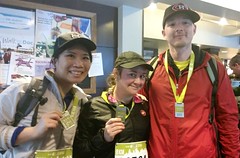 Good job, Observatory team4! Congrats also to my friends Candace and Julie, who both ran the half marathon this year. Great job!

After the race, Christina, Geoff, and I went to Forage for brunch. I’ve always said that post-race brunch is the greatest thing that you will ever eat in your entire life, and Forage  did not disappoint!

Next stop: Scotiabank half marathon!