The Lady And The Lords

In not so serious but absolutely important news, Dr. Dan, Rick, and I have spent the last several months painstakingly exploring our respective genealogies to uncover a really random piece of shared ancestry. And for all it’s click-bait worthiness, you’ll be surprised to learn what that is.

Apparently, way back in the old-time-y days of yore we shared a Scottish ancestor who just happened to be of noble stock1. Crazy, right? What does that mean? It means that
Sir William MacPherson has had some influence 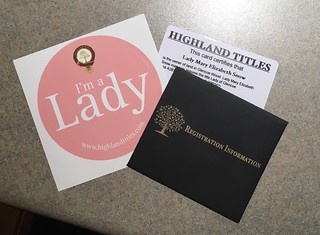 on our genes2. It also means that his nobility has somehow been passed down through the generations to us5. I mean, that probably comes as no surprise, given how noble and royal-like we are. More than that, it means that we are rightfully the Reverend Lady Dr. Beth Snow of Glencoe, Lord Ricky Chin of Glencoe, and Lord Dr. Daniel Gillis of Glencoe6. Although it might actually be the Reverend Dr. Lady Beth Snow of Glencoe, and Dr. Lord Daniel Gillis of Glencoe – I’m not quite sure how the titles should be ordered.

Regardless – we be all sorts of noble, yo!7

3 Though some of the records indicate that he may have changed his name to Sir William MacPherson from the noble Sir Billy MacChin4.

4 Actually, the records don’t show that at all. At least, we don’t think they do. We didn’t actually check.

8 This post might not be factually accurate. In fact, it’s probably mostly factually alternative in its factitiousness9.

9 Truth be told, we actually donated funding to support conservation efforts in Scotland, and in return we each “own” a one square foot plot of Scottish highlands and were given the titles of Lady and Lords of Glencoe10. But that doesn’t seem nearly as fun as the possibility of a shared ancestry.

10 Don’t worry folks; despite our newfound but obvious and noble birthrights, we promise to preside over the common folk in a fair and just way. We’re good like that.