I guess this is what it must feel like to be a whale, if a whale lived in a vast ocean of work instead of water 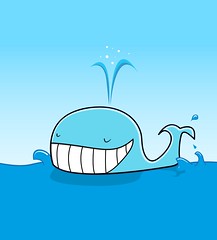 I feel like I’m coming up for a short breath after being submerged for a really long time, knowing that I’m shortly going to dive back down. I guess this is what it must feel like to be a whale, if a whale lived in a vast ocean of work instead of water.

The things under which I’ve been submerged recently include, in no particular order:

But the textbook revisions and the marking are all done now, and those were two really time-consuming things that I was having to fit into my weekends and evenings, and the time available for working in the evenings and on the weekends were abbreviated due to the fact that I’m dedicated to doing my three days a week at the gym (which really is a big part of what helps me decompress when I’m so busy!) and I’ve been working longer than normal hours at my actual day job, due to all the work of preparing for the aforementioned Really Big Thing. So now I feel like I have a few days where I can actually breathe. By which I mean “write a blog post about how busy I’ve been”.

Of course, this is just a short reprieve, as I’m about to dive back down into the deep ocean that is work craziness. As, I mentioned above there is a Really Big Thing happening at work soon. This Really Big Thing will involve my team (a) providing data to monitor the progress and/or outcomes (good or bad) of said Really Big Thing (translation: lots of people will be wanting to see the data we produce daily) and (b) having to provide support 12 hours a day, 7 days a week until such time as the Really Big Thing settles down into just a Big Thing and we can go back to our regular work days and hours. Which means that I’ll be working some early mornings and some weekends and also, since I’m the lead of the team, should any crises happen, I could potentially be called even when I’m not on site. All that stuff happens starting April 28th.

Also, I’m going to have some house guests around this same time! Dr. Dan and one of his students will be staying with me from May 2-8, as they will be in town for important work things, and then from May 8-13, my mom and my Aunt Wendy will be staying with me as my Aunt has an important conference to attend and my mom is coming along to visit. I’m very excited to see all of them, as I think it will be good for me to get some quality time with family & friends to keep me grounded when I’m not at the hospital doing my Really Big Things.

Another thing I’m behind on blogging about is my gymiversary! March 3 was my one year anniversary of having joined Strong Side. I’ve blogged a few times about my gym experience and it’s mostly for lack of time to blog that you haven’t been subjected to me talking about how much I love my gym.1 I remember thinking when I signed up “am I really going to be able to do this gym thing on the regular for six whole months??” (I signed up for the 6 month commitment to start because it gets you a better monthly rate than if you just sign up for a three month commitment). And now here is it more than a year later and not only have I regularly gone to the gym three times a week for an entire year, but I actually really love it.

As I’ve mentioned before, part of what I love about it, in addition to the more obvious I-am-getting-stronger reason, is that it’s an easy way for me to be mindful. It really helps me disconnect from my work and all the other things that one has to deal with in life as I focus intently on my form and my breathing. In fact, Friday evenings are one of my favourite times to work out – I find it really helps me to separate from my busy workweek and get ready for my weekend! I love to hit the weights on Friday after work and just work out all the stress of the politics, emails, and deadlines.

Another part of what I like is the social nature of the gym. I’ve gotten to know a fair number of people there – and there are people that I knew before I started going that I’ve discovered go there too (or have joined since I joined) – and everyone is really down-to-earth and supportive of each other. You’ll regularly hear people catching up and joking around and cheering each other on when someone is doing something really tough. It’s a nice feeling to walk in and see friendly faces and people who know your name.

The other day I was there and a person I didn’t recognize came up to me and said, “I don’t want to sound creepy, but I just wanted to tell you that you look really strong! I saw you lifting and I thought “I want to look like that!” Honestly, it was so out-of-the-blue and such a lovely compliment! We chatted for a bit – she’s relatively new to the gym and I told her that I’d been coming there for a year and that it really does work! If you’d told me when I started that I’d be able to lift what I can now, I’d have said you were crazy. But it’s amazing what you can do with consistent work and a program tailored by people who know what they are doing!

When I started going to the gym, I was just getting past my year of injuries and I’d put on some weight from not having been able to run (which was how I’d been keeping somewhat in shape for the past decade) and I wasn’t feeling too great about that. But now, despite the fact that I weigh more than I’ve ever weighed in my life, I’m actually a lot happier with how I look and feel, because the weight gain has been muscle. I’m slowly coming to grips with the fact that I have to get rid of some of the clothes that I haven’t been able to fit into for quite some time but had been hanging on to because I was sure I’d someday get back down to my pre-MBA weight, because even I manage to bring down my body fat % a bit, my quads won’t let me get into those pants and my shoulders and back mean those shirts won’t comfortably fit – and I don’t have any intention of losing these muscles, so I’m OK with that.

As you may recall, one of my goals for this year was to deadlift my own body weight, and I actually managed to do that on January 30. I decided on wanted to capture it on video and since in my current program I’m doing deadlifts where I do 6 reps, then up the weight and do 5 reps, and so on until I’m down to just 1 rep. So I got this on video the other day where I deadlifted 68.5 kg (or 151 lbs), which is more than my body weight for 2 reps2

Deadlifting 68.5 kg. That’s more than my own body weight!


For good measure, I’ve also managed to back squat more than my weight. Here’s me back squatting 70kg (or 154 lbs).

Squatting 70 kg – more than my own body weight!


My other goal for this year is to do a full pull up or chin up without the assistance of any resistance bands (basically, you hang a resistance band off the bar you are hanging from and step into it and the band takes off some of your weight so you do the pull up or chin up motion, but without having to lift your entire body weight). When I first started going to the gym, I needed three different bands to do pull ups, but I’m slowly but surely working my way towards fewer bands. Like with the deadlifts, my current program has me doing 6 pull ups with a couple of bands, then 5 with fewer/smaller bands, and so on until I reach 1 rep. I tried to do my last rep with the second smallest resistance band, but couldn’t quite manage it, so had to do it with a slightly bigger band, but I was still pretty happy to be able to do that. Definitely made progress, but still have a ways to go. Hopefully by the end of the year I’ll have done one on my own!