One week until the Scotiabank half marathon…

… and this is what my left ankle looks like: 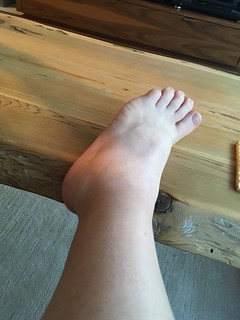 While out for a run yesterday, I stepped on an uneven bit of pavement and went over on my ankle a bit. I felt the tweak at the time it happened, but it didn’t hurt and so I continued on my merry way. And I was actually surprisingly merry given that it was a torrential downpour that I was running in! When I got home, I was so wet that I looked like I’d jumped in the river! My socks contained 57 ml of water1! Later in the day, I could definitely feel that I’d done something to my ankle, but it looked fine. I’ve kept off my feet as much as possible yesterday and today, but this afternoon I looked at it and saw it was quite swollen. I’m sitting with some ice on it right now and that seems to be helping.

This just seems to be par for the course for my training this year, which has gone something like this:

In March, I finally got back into running regularly, but it’s just been… hard. I usually have most of my runs where I feel great, whereas this year I feel like I’ve had at least a run every two weeks that’s been tough. My zone 1 pace (which is where I am supposed to do most of my training – keeping my average heart rate at ~148) has been much slower than I’d like and though it’s improved a bit, it’s not improved as much as I would have liked. Halfway through last week’s 19 km run, my IT band started killing me (though foam rolling this week seems to have helped). And now it’s a week before the race and I have an injured ankle. I was really hoping to do some good little race prep runs this week, but now I think I’ll hold off until my ankle feels better… or until race day comes – whatever comes first.

OK, I think it’s time to switch to a heat pack on my ankle.

Also – don’t forget that there’s still time to sponsor my run with a donation to my fundraiser for the Vancouver Orphan Kitten Rescue Organization!