Sunday marked the triumphant return of my Coquitlam hockey team, the Blazing Blades, to the status of Div 1 champions! You may recall that it 2014 we won the coveted trophy. Last year we did not, but this year we had our strongest season ever, going 21-3-1 in the regular season. We went 2-1 in the first round of the playoffs, which was a round robin, which was good enough to get us to the finals to face the Ringers, the only team who had beat us in round 1. 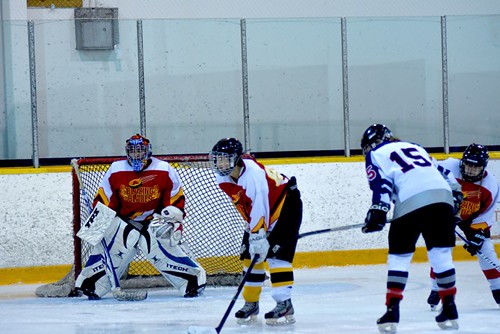 A photo from the game of us lining up for a face off in our end. I’m the one on the right of the photo – you can tell it’s me because (a) I’m shorter than everyone else and (b) my signature braids.

When all was said and done, the final score was 3-0 for us, and so the trophy is back in our hands! 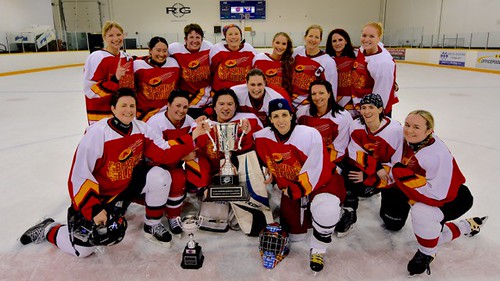 Isn’t the trophy pretty? And just like the Stanley Cup, players get to take the cup home for a week. I can’t wait to get my week – I’m going to take it in to work to show it off! 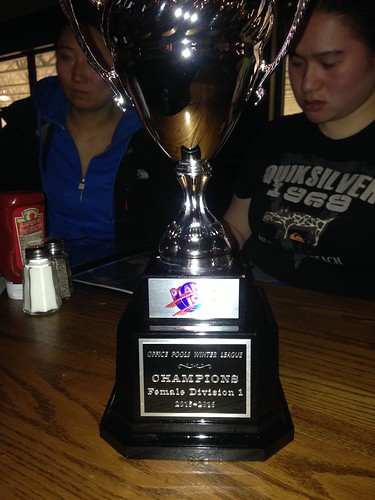 Of course, no victory celebrate would be complete without a drink from the trophy! 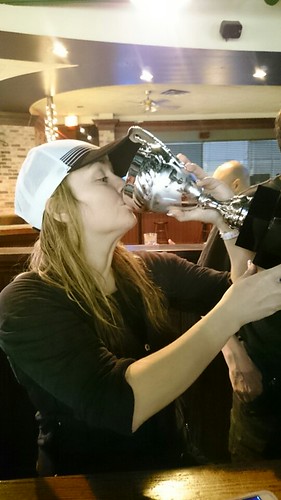 All in all, it was a great season – I’m really lucky to get to play with such a fun and talented group of women! 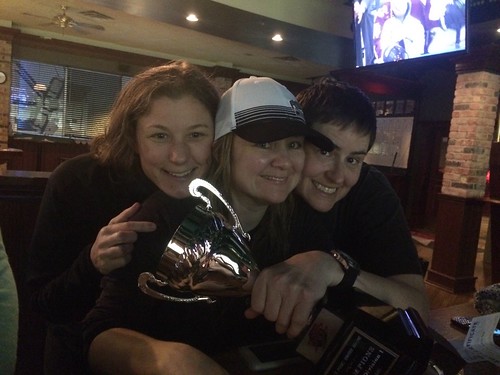 On the left is game MVP, Tig (she scored 2 of our 3 goals, including the game winner) and on the right is team captain & coach, Ellen. It was a hard fought game, with neither team yielding a thing for nearly two full periods of hockey. Then the Ringers broke open the scoring with just 8 seconds left in the second. We answered back with two quick ones in the beginning of the third, and then we traded goals – they scored, we scored, they scored, and finally, we scored the game winner with less than a minute to go in the game1.

I have to say that victory tastes that much sweeter when you (a) are the underdog and (b) have to work really, really hard to get that win! After the game, there was much rejoicing, complete on ice paparazzi photogs (photos to be posted once I get copies of them) and locker room celebrations: And a trip to the pub to spend our victory money2. And no victory would be complete without drinking out of the trophy, right? All in all, it was a great game and a great season. The team really came together under the guidance of a strong leader, worked hard and our teamwork and focus on playing our game paid off. I like it when that happens.