Hey, remember that time I played hockey for 10 days to raise money for Cystic Fibrosis? Well, yesterday when I picked up a copy of the Royal City Record (my local paper), I saw a familiar face from that game: Bill Markvoort. Mr. Markvoort was a great supporter of our game. His daughter, Eva, was an amazing young woman who died four years ago from Cystic Fibrosis, but her legacy lives on through her work to raise awareness of Cystic Fibrosis and organ donation, and through the ongoing work of her family to carry on her legacy. The family generously allowed us to use Eva’s striking image for promotional material for our hockey game: 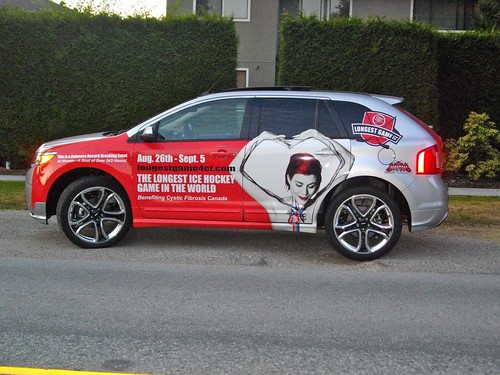 According to the article, Mr. Markvoort turns 65 this year and he’s taking part in the GearUp4CF 1,200 km bike ride from Vancouver to Banff, with a goal of raising $65,000 for Cystic Fibrosis! I don’t know Mr. Markvoort, aside from having met him at the hockey game, but I feel like I have a sense of what he’s putting himself through – a nine-day bike ride sounds comparable in its level of gruelingness to 10 straight days of playing hockey! And I know that it really helped me out to be supported in my efforts, by both friends and strangers alike, so I figured I should pay forward all the support I got by contributing to his fundraiser.

Won’t you join me in supporting this worthy cause?  You can donate at his blog: http://65for65roses.blogspot.ca/