And just like that, NaBloPoMo is over. Where did November go, exactly? And along a similar vein, where the hell did December come from???

So, yeah, I managed to write a blog posting every single day1 Interestingly, I didn’t end up using hardly any of the ideas that I brainstormed before the month started 2 – once I got going, I seemed to come up with things to blog about every day.

Also, I just looked at how I’m doing relative to my 2016 goal of writing 116 blog postings this year and I’m happy to see that as soon as I click “post” on this one, I’ll have 101 blog postings for the year – just 15 to go! So I just need to blog every other day in December, though now that I’m on a roll, I think I’m going to see how long I can make this blogging streak go!

And now, even though it’s unrelated to anything, is my new favourite song, which I heard on an old episode of the Caustic Soda podcast (I’m listening to older seasons that I hadn’t listened to yet):

Tonight was the last class of the course I’m teaching this semester. Since it was my first time teaching this class, it was a crazy amount of work and I am so, so, so, so, so, so tired. But I have to say that I really enjoyed teaching this class! The material leant itself well to active learning – though I definitely want to increase the amount of activities and decrease the amount of me-as-a-talking-head even more next year. The students did their class presentations this week and last and they were excellent – they really went above and beyond to produce some stellar work. A few students stayed behind after class to chat with me – they said that they agreed that more in-class activities would be better and even had some ideas for possible activities. And they said that they got a lot out of the class, as it was so different from any of their other classes, and that they found the little extras (like stories I told that brought the concepts into real life situations and videos I shared that touched on the concepts we were learning) really added some depth to the class, and that they really appreciated the work I’d put into it. That’s the kind of feedback that puts a smile on this very tired instructor’s face!

I put up the Christmas tree last night! 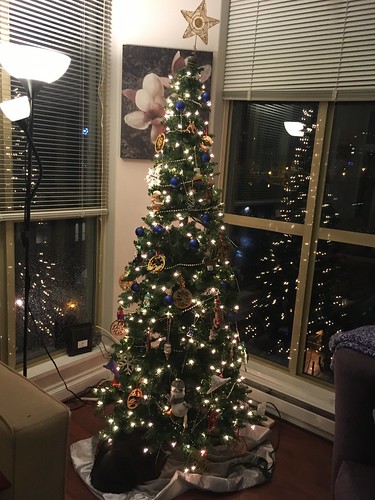 It pretty much looks like last year, but if you look closely I have a few new inhabitants, including this S’More who is baking that my Aunty Eileen gave me for Christmas last year: 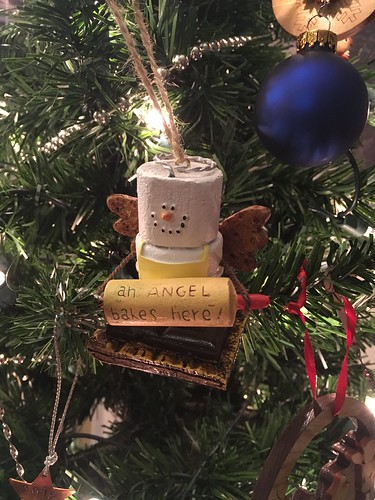 This blue house I picked up while I was in St. John’s: 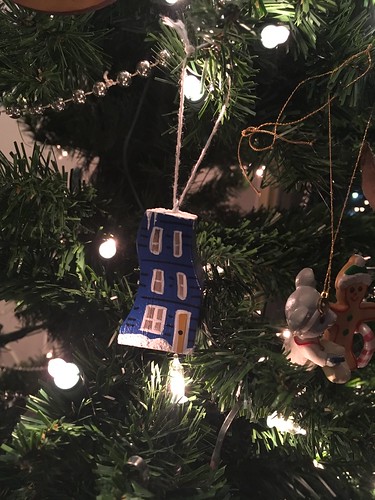 And this mommy and baby kangaroo that I bought in Australia1: 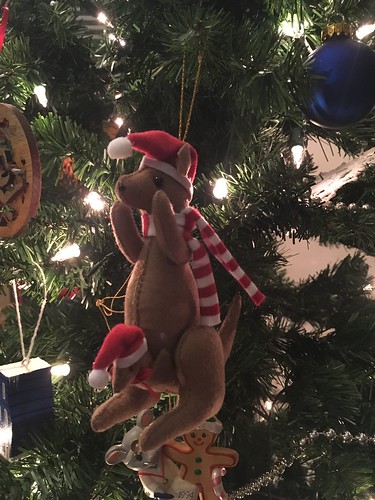 And, like last year, the cats are a big fan of sitting on the tree skirt: 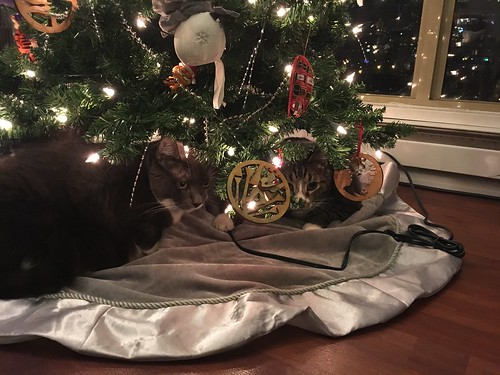 I guess that’s bound to happen when you have a velvet tree skirt! So soft!

The first time I learned about the concept of “meta” (though not by that name) was in my undergrad when I was taking first year drama and we studied a play called Six Characters in Search of an Author by Luigi Pirandello, which we were taught was “self-reflexive”1 – i.e., it reflected on itself. In the case of Six Characters in Search of an Author, it was a play about a play in which characters, known as The Characters, show up and interact with The Actors and The Director.

Sometimes described as “X about X”, meta means “a prefix added to the name of something that consciously references or comments upon its own subject or features” (Source). So, a play about a play would be a meta-play. (Meta can also be defined as “a prefix added to the name of a subject and designating anothersubject that analyzes the original one but at a more abstract, higher level”, but for this blog posting I’m going with the “X about X” definition.).

I started noticing a number of things that were meta and once you start thinking about it, you start to see it everywhere! For example, I’ve come across a number of meta things at work:

And in things I’ve read lately:

Going with the arts theme, which is where I first learned of meta, you can have lots of meta-art:

And they I started thinking about all kinds of other things you could meta:

Although I’m sure there are countless more examples that I could come up with, I feel like I’m all meta’d out. The only other “meta” that pops to mind is metaphysics, which is “is a branch of philosophy investigating the fundamental nature of being and the world that encompasses it” (Source). Which isn’t really physics about physics, is it? I’m not sure why it’s called metaphysics (but if anyone else knows, please enlighten me!)

Also, I can’t figure out why sometimes “meta” is hyphenated (as in meta-analysis), but other times it’s not (as in metadata)6.

Today’s blog posting is limited because I was too busy doing a workshop and then a conference planning teleconference and now I’m off to dinner and to see Avenue Q!

The workshop was a great success – the participants were very engaged and seemed to like what I had to offer. It was also a great networking experience – I may have gotten myself invited to guest speak in a class and may have volunteer myself for someone’s PhD committee!

As a 5 ft tall woman, I’ve grown accustomed to wearing heels so that I can walk amongst the normal height people and only look very, very short, as opposed to the very, very, very, very short that I actually am. As a shoeaholic (a trait I inherited from my mother), I have an extensive selection of heels. But I haven’t worn a pair of heels since June!

When I sprained my ankle, I figured it was pretty sensible to wear flats. Fortunately it was summer and I have a few pairs of sandals that are nice enough to wear to work. And since I’d read that when you sprain your ankle, you are at an increased risk of re-spraining it for 3-6 months afterwards, I figured as a precaution I should stick to flats for awhile even after my ankle felt better.

And then my hip problem happened. So I’ve continued to not wear heels, given the limping and the cane and, though I am now on the mend, I’m not 100% and so I don’t want to re-aggregate it. But here’s the thing: it’s no longer summer, so I can’t wear my sandals. I really only have one pair of work-appropriate flats and then are burgundy, so they don’t go with everything (I have one pair of black shoes that have a platform with a slight heel that I do wear sometimes because it feels more stable than a regular heel). Three of my four pairs of work-appropriate boots (plus my one pair of ankle boots) are heeled. And last night I slipped on my way home from dinner and when I got home and took off my one pair of work-appropriate flat boots, I noticed this. 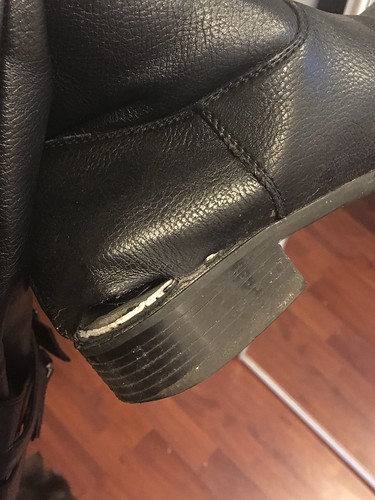 Somehow I don’t think these will be waterproof anymore 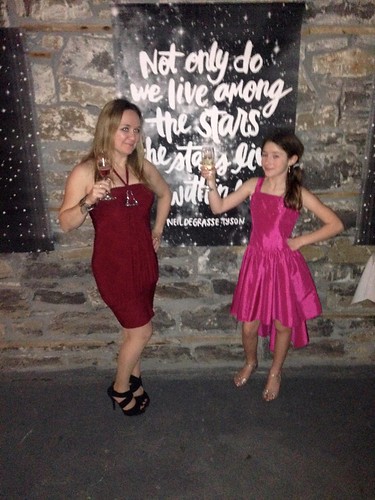 A few more years and we’ll be cheers-ing your birthday with real champagne!

I was at the grocery store today and looked at the headlines on the tabloids, as one does waiting in a grocery store line up. It turns out that the world has gotten so weird that the National Enquirer’s cover story is actually just the news. 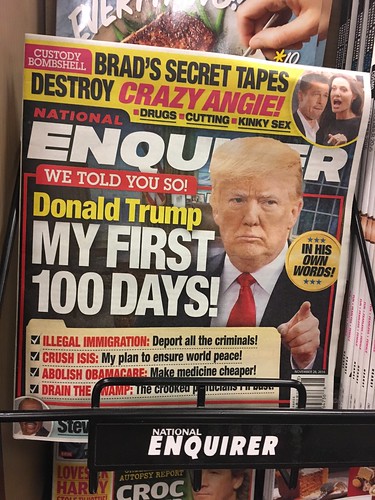 Here is an incomplete list of things I’m behind on: 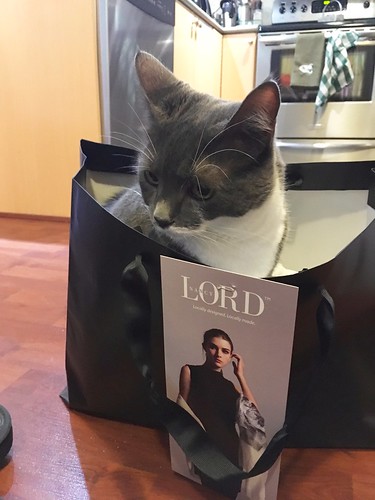 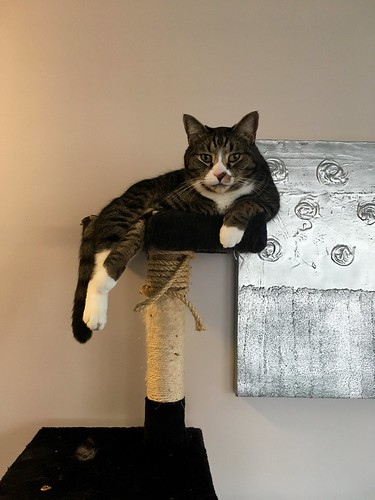