One of my goals for 2017 was to learn 12 new things – an average of one per month. I didn’t decide on what those things needed to be – I figured I’d be inspired throughout the year with things to learn. And my first source of inspiration was the discovery of some water on my bathroom floor, which turned out to be coming from a leaky toilet supply line. The toilet supply line, for the uninitiated, is the tube that runs from your wall into the bottom of your toilet tank and it’s how the water gets into your toilet tank so you can flush your toilet. 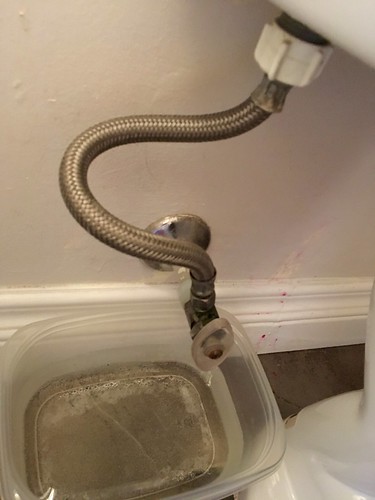 So anyway, mine was dripping water, which is not a thing you want your toilet supply line to do. I did some googling and figured out that (a) that tube is called a toilet supply line and (b) it’s relatively easy to replace. You just need to turn the water off with that handy dandy handle on the bottom, flush the tank so there’s no water left in it (and it won’t get refilled because you turned the water off), then unscrew the metal nut at the bottom and unscrew the white nut at the top, and then replace it with a new tube, which you can buy for $7. So I thought “Excellent! I can fix this myself for $7 (as opposed to having to pay for a plumber’s visit) and I’ll learn something new in the process!” 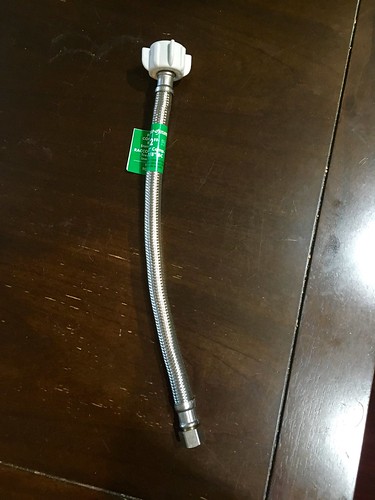 A shiny new toilet supply line, ready to be installed!

I followed the instructions and while the metal nut at the bottom was hard to unscrew, I managed to get it undone after some hard work. 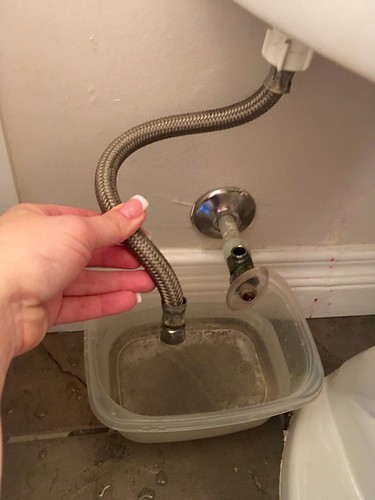 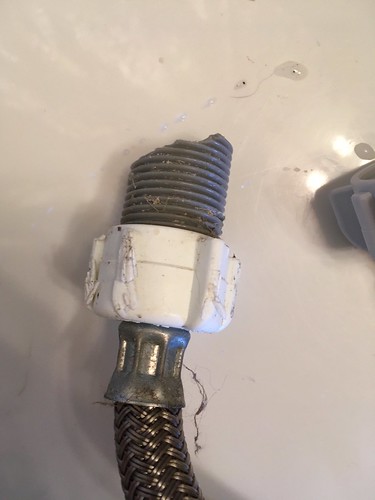 At this point I may have freaked out a bit, because I had only googled how to replace the toilet supply line – I had no idea what that piece I just broke was and, since I like having a toilet that can flush and I only have one bathroom in my apartment, I needed to figure out how to get this fixed quick! I did some googling and managed to find a company called GVA Plumbing1 that had a good rating on Homestars.com and the main guy happened to be heading into Burnaby (from Langley) for a job and was able to drop in to fix my issue for me that same day!  Mehmet was super friendly and even, upon my request, explained what he was doing as he replaced the toilet fill valve. It was actually not that complicated and I probably could have done it myself, had I not been too freaked out by breaking something and thus afraid I would break something more. At any rate, after $200, I had a newly installed toilet supply line AND a newly installed toilet fill valve, and now nothing is leaking. Hooray!

Also, I would like to point out that the exact wording of my goal was to “learn 12 new things (1 per month). They can be small things, but just something I didn’t used to know!” It does not say anywhere in the goal that I have to successfully execute the thing that I learned. So I have learned something about toilet repair: how to replace a toilet supply line and a toilet fill valve! And now I only need to learn 11 more things this year to achieve my goal!