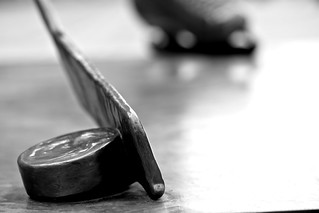 A few weeks back, I had to play defence in my hockey game. I usually play forward and haven’t really ever played defence1 and quite honestly, I find the notion of it a bit scary. It’s too much pressure! You are responsible for stopping the people on the other team from taking shots! And if they score, you feel bad. Playing forward, on the other hand, is all about the glory. Scoring goals or making a beautiful pass so that your linemate can score a goal – all about the glory.

However, one of my teams this year is a bit short on players who play D on the roster, so, depending on who shows up for a given game, occasionally some of us forwards have to go back on D for a game. And a few weeks ago, it was my turn. It was against a really strong team (they got moved up a division a few games later because they were winning so much in our div) and someone suggested I should play D because I’m a strong skater (which was a really great compliment! I feel like I’ve worked a fair bit on my skating over the past few years, so it’s nice to know that it’s helped!) and I knew I was going to have to work my butt off! And also have to figure a lot of things out on the fly – when I play my usual position (left wing or centre), I can go a lot on instinct since I’ve done it for so many years. But as D I really have to think about where I’m supposed to be and what I’m supposed to be doing! So much pressure!

Anyway, I actually thought it was a good experience, because playing defence gave me a totally different perspective on the game. I was able to experience the game from the D’s point of view and it helped me see how I can be a better forward. Often defence will tell us that in our own end, when the D get control of the puck, make sure to get open, keep moving, give them someone to pass to. It’s no use passing the puck to someone who is standing still, right next to an opposing player who is poised to swoop in and grab that puck, so the forwards need to get moving! And while that makes perfect sense, it’s one thing to hear someone say that, and it’s a totally different thing to experience being that D who has the puck and there’s no one to pass it to to get the play going in the other direction. And then to experience when the forwards are moving to the open ice, ready for the pass, and the you see how much of a difference it makes. It was so useful to see from the D’s point of view how the game unfolds when the forwards are doing different things and it really makes it real what you need to be doing as a forward. So in the end, I’m actually really glad I played that game as defence – I think I’m a better forward for having done it.

I’m pretty sure there’s an analogy in here to life – how it’s really worthwhile to see things from someone else’s perspective once in a while. Maybe even someone who is very different from you. How you can learn something about what their experience is like and maybe even learn something about yourself. But it’s past my bedtime and thus too late for me to get into such deep thoughts, so I’ll leave it up to you, dear readers, to give it some thought!

Image Credit: Posted by Guy Mayer on Flickr with a Creative Commons license. 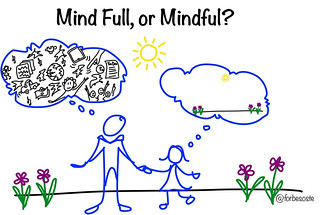 This past Monday was the last class of my 8-week mindfulness class. So I figure now is a good time to stop and reflect on what I learned.

When I ask you to listen to me
and you start giving me advice,
you have not done what I asked.

When I ask you to listen to me
and you begin to tell me why
I shouldn’t feel that way,
you are trampling on my feelings.

When you do something for me that I can
and need to do for myself,
you contribute to my fear and
inadequacy. After a run on a particularly rainy day. This was the shirt I was wearing *under* my rain jacket! Heading out for a run on New Year’s Day in the new running jacket that my Uncle Harry and Aunt Arlene got me for Christmas!

Themes for 2014: Reflection, Mindfulness, and Biking to Work

In addition to my 2014 goals, I decided to have some themes for this year. Themes are the new black.

During the past two years while I’ve been in school (in addition to working full-time at a job that requires lots of brain work), something I’ve had precious little of has been time. I’ve worked deadline to deadline at breakneck speed and when I had a break from classes (like Christmas or this past August), the last thing I wanted to be thinking about was, well, anything. But the thing is, stopping to reflect on the stuff you learn helps you retain it. At least I think I learned that somewhere, but I didn’t stop to reflect on it, so I might be retaining it wrong. At any rate, in 2014 I want to spend more time in reflection.

My sister has recently been immersing herself in the research surrounding mindfulness, which is about being aware and attentive to the present moment, noticing your thoughts and experiences in a non-judgemental way1. Since my sister and I talk all the time, this means that *I* am becoming versed in the science of mindfulness. I’m already a proponent of mindful eating and I’d like to spend time in 2014 being more mindful in other aspects of my life2.

Riding My Bike to Work

Ever since I moved to my new office, I’ve had grand plans  to start biking to work. It’s a good biking distance from my home – 7.5 km – and my office building has a locked room in the parkade in which to lock your bike and there are showers at the office gym. I have a sweet bike that I really like. I did a test run on a weekend day back in the summer and the bike paths to get from my place to work are reasonable, though would be a bit dark in places if you went before sun up or after sundown, and it doesn’t take that much longer than when I drive or Skytrain3. So a lot of the pieces are in place, but I still haven’t quite managed to actually bike to work yet. Excuses include: I don’t have a rack and pannier to carry my stuff4, I don’t have proper rain gear, and it’s too dark in the morning when I go to work and in the evening when I go home. Well, it’s time for me to do something about the first two excuses – and the last excuse is fixing itself day by day. For Christmas, my mom gave me money for a pannier and Sarah & Dave gave me money for sports-related paraphernalia as well, so I need only get off my butt and head to the store to purchase the gear I need to make biking to work a reality! It’s still a little too dark out in the morning when I go to work, but the days are getting longer now, so I’m confident that I can get going on this one soon.

So, there you have it folks, three themes for the new year. I’ll be sure to report back on how I do with these!