I think someone forgot to tell Watson that he’s a cat, as he is strangely obsessed with eating green vegetables. Cucumber is his absolute favourite, but he also likes lettuce, spinach, green beans, and asparagus. One time I had a container of small tomatoes in a variety of colours and he reached in and grabbed a green one and ran away with it1

Not only does he like these veggies, but he seems to prefer them to actual cat food. If I put out the cats’ dinner and then start making myself a salad, he will abandon his meal to come and beg for lettuce and cucumbers.

He also loves to watch me dry my hair. I’m not sure what he likes about it so much, but any time I dry my hair, he sits just outside the bathroom and watches intently.

His other obsession is with taking these things off my bed frame:

I’m not sure what these things are called, but they are little decorative knobs on the bed frame that are apparently just inserted into little holes in the bedframe:

For some reason, Watson just has to rip these things out of throw them on the floor. Just the other day I found five of them under my armoire2. I still haven’t found all of them, but at least those five are back in place… well, until Watson discovers I put them back and rips them out again. I fear I am fighting a losing battle on this one.

Yesterday afternoon at work my throat started to get a little bit sore. Being a “walk it off” type of person when it comes to illness1, I had a cup of tea and figured that should fix me up. Went to a board meeting after work and then my salsa dance class.

This morning, I woke up with my throat burning like the fire of 1000 suns. But the thing was, I had a meeting at work where I needed to review some stuff with a governance group and I was on their agenda for 50 mins of their 1 hour meeting. And the only co-worker who could reasonable have covered this for me is away on holidays for spring break. So I dragged my sad little self into the office to do this meeting, update the documents we were reviewing to give back to them, and then came home sick2. On the way home, I stopped in at the grocery store to get some stereotypical sick person groceries: 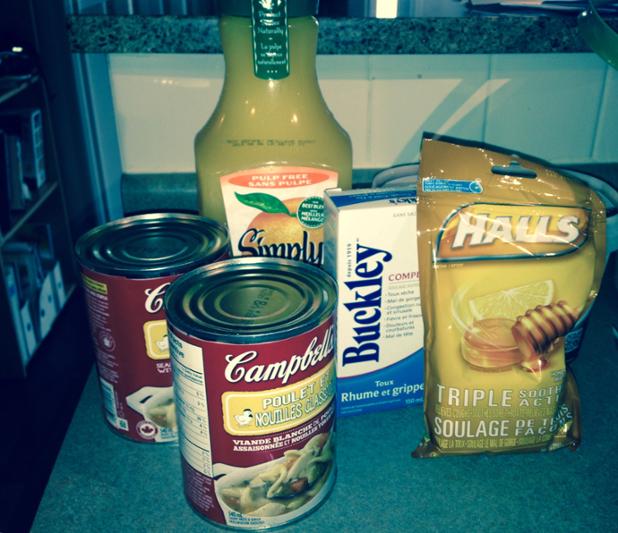 I ate some soup, drank some OJ, and then went to sleep for several hours. My kitties joined me for this epic nap, because they are such good caregivers. Or possibly because they just nap all day anyway – I’m not usually here during the day, so it’s entirely possible that this is how they normally spend their time.

For anyone who knows me, this is a monumental day, as calling in sick to work goes against ever fibre of my being3. And given how sore my throat is and how tired and weak I am at the moment, I might have to call in sick again tomorrow4. Two sick days in a row for me – I believe that is a sign of the end of times.

Me and my kitty caregivers

Random Things I’ve Been Thinking About in No Particular Order

Here are some things that are too long to tweet, but too short to make into whole blog postings on their own.

One of my favourite things to do when I play hockey is to screen the goalie. I like to get right in her way so she can’t see, which means that when one of my teammates gets the puck, they can take a shot and the goalie will have a hard time seeing it (and I’m also right there to pick up a rebound, should one occur). Obviously goalies don’t like this and they often call their defenceman to come and move me out of the way, which is, to their surprise, difficult, since I’m so little. My little size is misleading though, because they totally think they should be able to move me, but since I have a low centre of gravity, I’m harder to move than you’d think. Which then means there’s both me and the defenceman who is trying to move me screening the goalie. The more the goalie and/or defenceman expresses their frustration, the more I know I’m doing a good job, and so it only encourages me to do it more. Anyway, I recently realized that I have an office equivalent of this – arguing with one of my coworkers for the sake of arguing. Things we’ve argued over recently include (1) this study (which he holds up as a reason to not to go out running – and to warn me that I’m probably going to die when I go out for a run on my lunch (he also enjoys being annoying) and I provide a critique of the methodological issues with the paper that makes me question the conclusions) and (2) what time of day does “evening” start.

One of my other coworkers got his first ever ticket – it was for driving in a bus lane. He was in an area he’d never driven before and he didn’t notice the bus lane sign and he was very offended that the cop didn’t just let him off with a warning. I have now dubbed this coworker “The Bus Lane Bandit” and refer to this incident as his “crime spree.”

I am currently working on the revisions to a journal article for which one of the reviewers suggested a few papers that I might find helpful to refer to in my paper – and one of those articles was in French, which, of course, I can’t actually read (beyond some basic high school French I learned more than 20 years ago). So I put the paper through Google Translate and was mostly able to get the gist of the paper, but there were some obvious errors. One such error was Google’s translation of a subheading in the paper that read: “Rencontres après les entrevues semi-­dirigées”. Based on my understanding of the journal article, this should be translated to “Meeting after the semi-structured interviews”, as that section of the paper talked about a meeting that was held after the researchers conducted semi-structured interviews. Instead, Google translates it to this:

Which has a whole other connotation entirely.

Another error I came across in Google translate is its translation of “I love my cats” into French. If you ask Google to translate just “I love” it gives you the correct “j’aime”. “Je” means “I” and “aime” means love and since “aime” starts with a vowel, you replace the “e” in “je” with an apostrophe to get “j’aime.”

But when you ask Google to translate “I love my cats”, you get “Je aime mes chats”.

Why Google Translate gets it right in the first instance but not in the second instance is a mystery to me. And it doesn’t matter what word you put at the end of the sentence – you can ask it to translate “I love my frogs”, “I love my mom,” or “I love job”, it still gives you the incorrect “Je aime”1. It also gives you “Je te aime” instead of “Je t’aime” for the translation of “I love you.” WTF, Google?

And finally, I saw this over on The Bloggess’ blog and it is the coolest thing in the history of ever: