So yesterday I got up to go for my run, figuring I’d make it a morning run while it was still relatively cool, given that the forecast was calling for yet another 30+ degree day. When I looked outside I saw what I thought was a foreboding storm cloud – angry and grey – and thought “That’s strange, it isn’t supposed to rain today. It’s supposed to be sunny. I wouldn’t mind a bit of rain on my run, but that cloud looks like it would cause a torrential downpour!” And then I headed off to Burnaby Lake, as I needed to run a 10 km and the route around the lake is just that distance. And in Burnaby it was clearer, though I noted that it seemed rather humid. Or, as it turns out, it seemed like it was humid because the air was thick with smoke from about eleventy billion forest fires raging around the province!

It’s weird that Burnaby was clearer than New West, as the closet fire was atop Burnaby Mountain:

But the smoke covering the Lower Mainland isn’t just from that (relatively small) forest fire. There have been fires all over the Interior, in Pemberton, and on the Island. At the time I’m writing this blog posting, the most up-to-date stats ((That link will take you to the current stats, so unless you read this right when I post it, there will be different stats on there. I couldn’t figure out where to get a permalink to today’s stats!)), which cover from April 1 to July 5, 2015, state that there have been 865 fires with a total of 221,455 hectares burnt. There are currently 103 “fires of note and/or fires larger than 10 hectares1.

After my run, I headed out to Ladner and as the day progressed, it just got smokier and smokier. I’ve never seen anything like it! Apparently people were even finding ash on their cars!

Now, if you haven’t been in the Lower Mainland in the past two days, you might think I’m exaggerating, so here’s a side-by-side photo comparison of what Vancouver usually looks like and what it looked like yesterday: 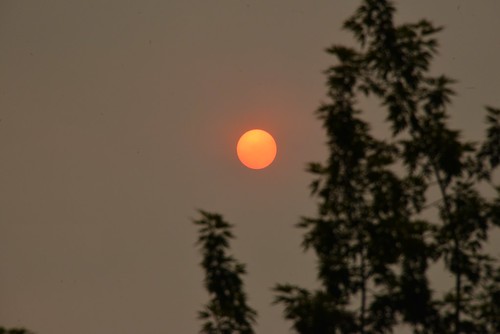 And here’s a photo of the smoke invading the city: 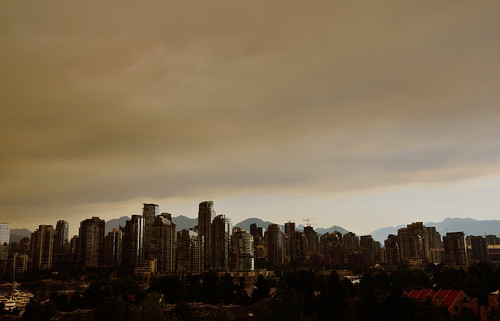 It’s quite surreal have your city covered in smoke2. I’m getting away pretty easy, health-wise, as it’s really just irritating my eyes when I’m outside or if I have my windows opened (which I need to do because it’s so hot!), but for anyone with lung issues, this can be really dangerous. And the forecast doesn’t call for any rain in Vancouver until next Monday3!