Thursday night a few friends and I went to Beer & Bling, an event held at Working Silver, a silversmithing shop, where local jewelry makers were selling their wares while sampling some fine Steel & Oak beer, with beer proceeds going to the Arts Council of New Westminster 1. And I have to say that the turnout was great, both the beer and the jewelry were excellent, and it appeared that lots of both were being sold!
My friend Heather stopped by on her way to dance class, my friends Kim and Cath came in from Vancouver (with poor Cath making an accidental side trip to Surrey because she was on an Expo Line instead of a Millennium Line train2.) and my friend Erin came over from Surrey. Cath did the lion’s share of her Christmas shopping, Kim did a mix of shopping for gifts for others and gifts for herself, and I bought one gift for someone else and a few things for me, and Erin got herself a ring plus a bunch of business cards so she can go check out the artists websites and spend some time deciding what to buy3

First I got myself a Christmas tree ornament: 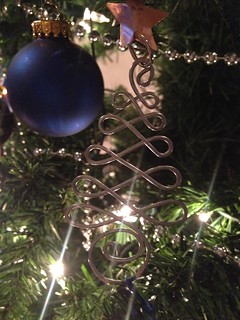 And I also treated myself to this necklace and these earrings: 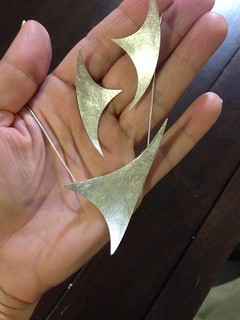 They kind of look like (a) you could do some serious damage with them in a street fight and (b) you could use them to ask Scotty to beam you up.