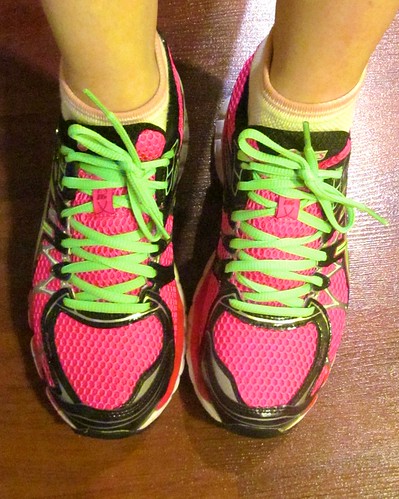 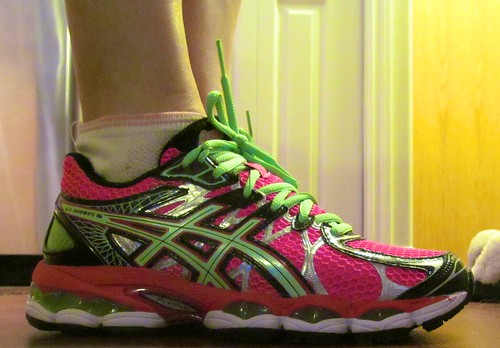 Assuming the aficionados like fugly running shoes. As was the case when I bought my last pair2, the current theme for running shoe design is “garish”. I mean, I don’t like pink at the best of times, but paired with that green? The horror! The horror! However, it was the most comfortable of all the many shoes that I tried on, each of which were hideous in their own special way.

An aside: While I was buying my shoes, another woman was also in the store looking for some runners. She told the salesperson that she was just visiting from China, where she is currently working and she needed to buy shoes here because she wears a size women’s 9.5, which is impossible to find in China. She also said she was training for the Great Wall of China half marathon, which sounds like it would be so freaking awesome. And even after looking at this insane elevation map, I still kind of want to do that race someday!

I went for my first post-concussion run today.  It was good – I decided to go for a moderately paced 6 km run along the waterfront in Coal Harbour – which was freaking packed with people, what with it being all sunny and warm out and there being an open house at the newly expanded Vancouver Convention Centre.  So a good deal of my run was spent avoiding collisions with slow walkers and people with baby carriages. At one point I nearly ran into what looked to be either Daniel or Henrick Sedin, or possibly their long lost triplet.

Also, it was my first run in my new running shoes!  I realized after my 16 km training run two weeks ago that it was high time for some new running shoes. I’d had the ones I’ve been using for more than a year – including two 10 km races and 12 weeks of training for a half marathon – and after that 16 km run, my feet weren’t too happy.  So it was off to the Running Room!  The last time I bought running shoes, I went with Asics Nimbus 9.  I was pretty happy with them, so decided to go with the Asics Nimbus 10: Notice that they are white and red. So they go with my beautiful blog theme.  For the record, that is totally a coincidence.