Cabin in the Woods

So speaking of being on holidays, Scott and I decided to spend a few days of our holidays on the Sunshine Coast. Neither of us have been before and we kept hearing how lovely it is, so decided to check it out. Scott had a CPA exam today, so after he finished that we headed over on the ferry… 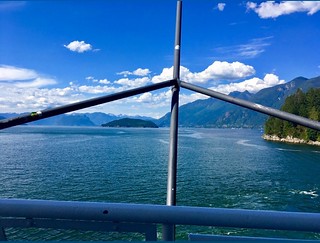 …and now are settled in at our little cabin in the woods for a few days. (What could possibly go wrong at a Cabin In The Woods?) 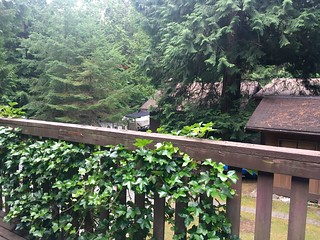 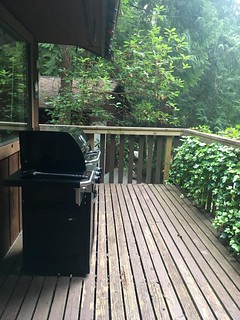 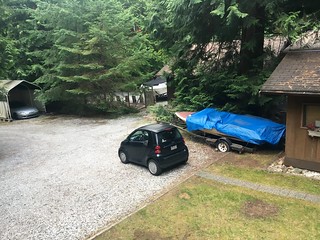 Figure we’ll do some hiking and explore the area. I hear there are some cool rapids nearby!

Category: Canada, travel Tags: BC, ferry, people who are cool enough to travel with me, travel Leave a Comment

I’m on a super ferry! Super ferries are like regular ferries, only more super. One of the things that makes them so super is that they have wifi! Squee! Of course, now that I’m on the super ferry with its super wifi, I realize that I don’t have a heck of a lot to blog about!

Since our epic tackling of Mount Baldy, we’ve been enjoying some R&R. Mostly just relaxing and hanging out – and I’ve been doing a bunch of school-related reading1. I’m at the point that I’m sufficiently freaked out by the amount of homework I have to complete before September, so I’ve done a fair bit of reading over the last few days2. The extremely hot weather3 has leant itself to a lot of sitting on patios reading, as it’s a bit too hot to do anything too strenuous4. And seriously, who doesn’t love sitting on patios enjoying the sunshine and a fine beverage?

Right now, we are heading back to the mainland, where we will crash at home for the night, and then head up to the Okanagan. The plan for the Okanagan is lots of swimming, hiking, visiting wineries, and playing with Devon’s wee niece. With any luck, we’ll spot Ogopogo – or at least get some Ogopogo’s Lair!

You can’t spell “wine” without “win.”

And so the blogging streak of 2011 ends, a mere 42 days into the year. I blame BC Ferries for not having wifi on the Queen of Alberni. And then I blame the fine glass of wine that was waiting for me when I got to Rachel’s place, which put all thoughts of blogging out of my head. In conclusion: you can’t spell “wine” without” win”!   Anyhoo. I’m here in Nanaimo to give a guest lecture on inferential statistics to Rachel’s research methods class. All the fun of confidence intervals, alpha levels, and, of course, why correlation is not equal to causation. Along with few paradoxes. Anyway, that just reminded me that there was a slide I wanted to add to my slide deck, so I better get to that – my lecture starts in an hour!

In the meantime, here’s what I wrote on the ferry last night, fully intending to blog it when I got to Rachel’s:

I had grand plans to write a blog posting on the ferry tonight. I’m heading over to Nanaimo as I’m giving a guest lecture on stats in my friend’s research methods course at Vancouver Island University. And here I am on the boat – but there’s no wifi! Fail!

I’m on the 8:15 p.m. ferry, which gets me to Duke Point at 10:15, so I’m going to pretty much hit the hay as soon as I get to Rachel’s1. So nothing fancy for this blog posting, which I’m typing in Notational Velocity2 and will copy and paste to my blog once I get there, publishing it posthaste3!

Notes from the ferry ride:

Category: events, friends Tags: BC Ferries, ferry, people who are cool enough to invite me to visit them, Victoria 1 Comment

And I’m typing on my laptop, which is tethered to my iPhone!  All praise Steve Jobs!

I was pretty happy to have gotten on this 5 p.m. ferry, since the workshop I was at in downtown Victoria ended at 4 p.m. and I wasn’t sure I’d make it to Swartz Bay in time for the 5 p.m. sailing.  Especially after seeing the traffic going into Victoria this morning.  I’d come over on the ferry last night and stayed with a friend in East Sooke last night… a friend I’ve known since kindergarten (!) but hadn’t seen since high school (!), which was super awesome.  When we were little, I used to sleepover at her place out in the country and now she lives out in the country again – so it was just like old times. Well, except on the other side of the country.  And we had 15 years of life to catch up on!

And there’s the announcement telling us we are almost to Vancouver, so I better pack up my stuff and get back to my car!

Use Hand Brake. Or, Whatever.

A little while ago, I noticed this sign on the ferry, which I found to be pretty humourous: I guess I wasn’t the only one who noticed the problem of a sign about hand brakes having a picture of a foot on it, because on the ferry yesterday I noticed they’d replaced all those signs with these ones: So this past weekend I was out having so much bloggable fun that I never got around to blogging it. Until now. Which is Wednesday. The thing is, someone who lives in Vancouver would never really have occasion to take the Albion Ferry.  If you want to go to Langley, you would just drive over the Port Mann Bridge: To get to Maple Ridge, you take the Pitt River Bridge: The ferry ride itself is just a few minutes, but you often hear of 3, 4 or more sailing waits (and with each sailing being 15 minutes apart, that can be a substantial amount of time sitting in your car waiting for a few minutes on a boat).  So they are building a bridge – The Golden Ears Bridge – which has been under construction since June 2006 and which will be ready in about two weeks, so that people in that area can just drive over the river whenever they feel like it. And thus the Ferry is being retired next month. Hence the road trip. Kalev and I felt it was our civic duty to have taken the Albion Ferry at least once before it is shut down forever.

I’m pretty sure Kalev and I were the first ever tourists on the Albion Ferry.

But I’m ahead of myself.  First, here’s a picture of me picking up Kalev in Zaphod Beeblebrox the Car: Did I ever mention that I frickin’ love my car?

From Kalev’s, we headed out on Highway 1 and were chatting so much we totally forgot that we were supposed to get off the highway at the United exit.  Which super duper sucked because it meant we had to go over the Port Mann bridge, then turn around and come back. And the Port Mann bridge coming back was at a standstill.  So we sat ont he Port Mann for about 30 minutes when we really didn’t need to, seeing as we never meant to go over it in the first place!  Good thing we weren’t in a hurry!

Once we got back to where we actually meant to be, things were good and after much driving, we eventually got to the ferry. And then we had to wait three sailing waits!  But it was totally worth it, as it was a nice (albeit very, very short) little boat trip across the river: Proof that Kalev and I did, in fact, get on the Albion Ferry!

After the brief trip across the water, we checked out the quaintness that is Fort Langley.  I have a theory that all quaint towns are legally required to sell fudge.  Ft. L. did not disappoint. Kalev assured me that food in Langley does not contain calories on his birthday weekend and henceforth the fudge was dubbed “Fudge Zero”:

And then it was on to The Olive Garden for dinner.   The choice of restaurant was on Kalev’s insistence, as I maintain that the O.G. is white trash fine dining, but I do concede that the salad and breadsticks are tasty.  Also, the eggplant parmigiana was far more deep fried than I had anticipated.

And check out how big the “small car” parking spots in Langley are: I mean, I know my smart car is little, but you could easily have fit two of them in that spot – three if you’d parked them sideways!

After stuffing ourselves at the O.G., we decided to head home and on the way discovered a real, honest-to-goodness Baskin-Robbins store so, of course, we couldn’t resist the temptress that is Chocolate Mousse Royale ice cream.

And that, my friends, is how I spent my Saturday!