Thesis is as thesis does

I’ve made my thesis into a .pdf file in case anyone is interested in reading it. I didn’t want to just put up a link to it for the whole world to read because it contains a manuscript for an article that I have not yet submitted (I’m working on it!) and I know everyone out there in cyberspcae is just dying to scoop me… so if you’d like to read it, just drop me a line and I’ll let you in its secret location. Seriously, you know you want to read 183 pages of unimaginatively written science jargon. Plus lots of references! Who could resist?

Yes, I know that it is 3 am. And, yes, I do have to get up in the morning to teach. No, I haven’t been sitting around reading blogs and mugglenet.com until this late hour, why do you ask? 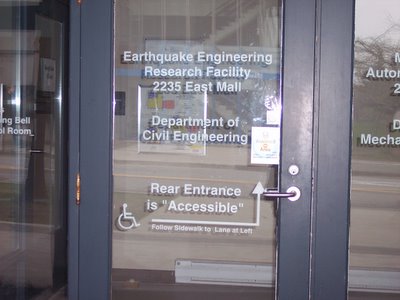 Is it just me, or is this door really funny? This is the door of the building next to the building where I work and whenever I walk by it and see that the “Rear Entrance” is “Accessible”, I burst out laughing. But I may just have a really dirty mind.

And there was much rejoicing…

For my troubles, I received this lovely form letter, that was personally stamped with today’s date. Hooray! 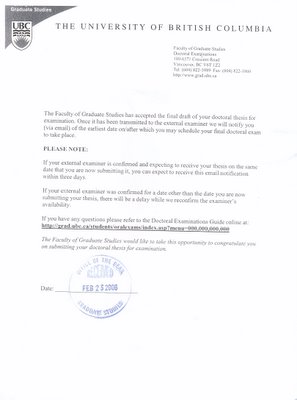 I celebrated by having a Tim Horton’s coffee* at the on campus Timmy’s (which was recently installed when Starbuck’s wasn’t looking). It was delicious.

The next step is booking the actual defence date! As soon as I get an email from Grad Studies indicating that they have sent my thesis off to the External Examiner (which, according to the letter is within 3 days), I will be able to book the date… of course, booking the date actually means picking two dates/times that all 5 examiners (excluding the External, who won’t actually be at the defence) are available and submitting that to Grad Studies, who will then pick the actual date. But at least I will have an idea of when it might be. And so will my legions of fans** who are coming out for the big day!

*In other Tim Horton’s news, I recently saw a sign indicating that a Timmy’s is being opened up in Kitsilano (the neighbourhood next to mine) in what was formerly Gordon Campbell’s campaign office (I hope that doesn’t ruin the taste of the coffee)… I’m sure that it will open up the day after I leave.

To boldly split infinitives that no one has split before…

You know what is more fun that doing a bunch of finicky revisions of thesis formatting?

Doing anything other than thesis formatting revisions.

Three Down, Two to Go

I just received word back from one of my committee members that she finished reading my thesis. And she liked it! Just has minors changes to make, nothing substantive. Yay me! Which means I now have feedback from 3 of the 5 and, so far, only small revisions needed. I’ve asked everyone to get their comments back to me by this Friday, so, provided the other 2 don’t have anything major, I’m hoping that I can get the changes done this weekend and then get the damn thing off to Grad Studies this week. How cool would that be?

I now have my two university examiners lined up. That means my whole thesis defence examination committee is pretty much set! (Although I do have to decide on just three of my five supervisory committee members — two have been picked, one has been eliminated, so I just need to pick the last one of two possibilities). My supervisory committee is scheduled to give me comments back on my thesis by next Friday, meaning I have one week left in which I don’t need to think about my thesis. Yay!

In other news, I received a pretty cool request this week. Well, not me in particular, but the science outreach program that I run. A delegation is coming to Vancouver from China and would like to meet with us to hear about how we promote science to kids as they are interested in doing this too and thought that they could learn from us. Just some government officials and senior managers from the regional and provincial level. Cool, eh?

I finally decided to take the plunge and get all of the postdoc related emails out of my inbox and into the postdoc folder where they belong. As I now have an official offer letter from them, which I’ve officially accepted, I figure that it’s OK to now get those emails out of the way. (Sarah, I considered your suggestion that I label the folder “postdoc inquiries,” but in the end I felt that the dieties would see through such a ploy). Unforutnately, in the intervening time my superstition has expanded and I’m now afraid to take any Ph.D. defence emails out of my inbox, for fear that it will jinx me on my defence!

Other than that, not much new. Trying to get some stuff done that I’ve been putting on the back burner while I was working on my thesis. Bo-ring! Have a giant pile of papers to mark that I really don’t want to start. Next week is UBC’s Reading Week, so I suppose I can use the time that I normally would be teaching to do the marking. But I’m not happy about it.

The big news around these parts is David’s Emerson defection to the Tory party. Funniest thing I read about this:

On election night, however, Emerson told his supporters things like “We have got to look at this as Ground Zero for rebuilding a stronger, more vibrant, healthier, winning Liberal Party,” and added to journalists, “I would like to be Stephen Harper’s worst nightmare.”

Apparently a healthier Liberal Party is one without David Emerson. Apparently Stephen Harper’s worst nightmare is someone who sucks up to him, jumping ship to get cabinet position.

I wonder how many people in that riding were voting strategically — voting for the incumbent Liberal when they really wanted to vote NDP out of fear of electing a “Tory”*. If I were one of them (or anyone who voted for Emerson because I wanted a Liberal), I would sure be pissed off today!

I also find it interesting that no one has referred to Emerson as a whore, like so many people did when Belinda Stronach crossed the floor. We’ve come a long way, baby?

*I put the words “Conservative” and “Tory” in quotation marks because I can’t bring myself to call this party the Tories, when they are clearly just the Canadian Alliance party (which was clearly just the Reform party).

Last month I went to see a talk by David Orr, Professor and Chair of Environmental Studies at Oberlin College, called “The End of Education” which was really cool. Click the link if you are interested in checking out the podcast of it.

As part of the same speaker series, I’m going to see Stephen Lewis, UN Secretary-General’s Special Envoy for HIV/AIDS in Africa, tomorrow. I’ve heard he’s an awesome speaker, so I’m really looking foreward to it. Next month is Dr. David Suzuki, who, although he is a Professor Emeritus at UBC, I have never seen at any UBC event in my 5+ years here. I’m really looking forward to that one too.

In unrelated, and depressing, news, I just read that “between 17-20% of postdoctoral fellows obtain a permanent faculty position.” Boo-urns!

Oh yeah, we had the Let’s Talk Science Western Regional Conference this weekend. It was good times! We got loads accomplished in 1.5 days of conferencing, plus we got to watch the Canucks beat the Flames (woo hoo!). We weren’t so lucky against Edmonton, but the Edmonton fans were gracious about it. It was also kind of sad, because I realized that it will be the last LTS Western Conference I’ll get to go to =( We’ve had four of them (we came up with the idea back in my first year, worked our butts off to fundraise for and run the conference and it was such a big success that we now have permenant funding for both a western and an eastern conference every year). I really enjoy getting to meet people from all across western Canada who are excited about making science fun for kids, reaching kids who may not have any exposure to scientists (and to post-secondary education in general) to open their eyes to the possibilities before them. It’s a truly inspiring bunch of people and I’m really going to miss them!

As Dave so aptly pointed out in the comments section, I am soon going to need a new title for this blog.

Why is it that whenever I accomplish a major milestone, I get deathly ill? OK, “deathly” may be a wee bit of an exaggeration, but bedridden isn’t. I don’t get sick that often, but when I do, I usually can work through it. But I caught this cold (or possibly flu — I can’t really tell as my symptoms have sort of been a mix of the two) last week that by Friday morning had me ready to keel over. I was so determined to get my thesis out to the committee that I dragged myself to school. Waiting at the counter of the copy place while they printed 5 copies of the thesis had me almost passing out. Walking around campus to drop off the copies to my committee members had me trembling from the effort. I forced myself to get through with the knowledge that as soon as I was done, I could go home and collapse into bed. Which I did. And I spent the entire weekend sleeping. I probably slept 20 hours on Saturday and another at least 15 hours on Sunday. When I wasn’t sleeping I was still too weak to do anything by lay in bed (or on the couch, for a change of scenery). I feel a lot better now, although, I still have a terrible cough. A similar thing happened shortly after I wrote my comps. It’s like your body runs on adrenalin for so long and when you finally have a chance to take a breath, it says “oh, I can actually take the time to be sick now! cool!”

*If you want to see something really funny, check out this Calgary Flames video.

**Yes, I played hockey despite being sick. About half my team was sick (one girl played despite having pneumonia!). Crazy hockey players!