When we last left off, our intrepid young doctoral candidate and her trusty PPP had just had dinner at the Eatery. As expected, I did not get much sleep that night, as I was waaaay too nervous to sleep. I did some last minute reading/cramming and even found a crazy typo as I was reading through my thesis*. I finally laid down around 3 a.m., but only to enter a continuous cycle of dozing off and the immediately waking up in a panic. Around 7ish I decided I may as well get up and get ready. I had a friend in my undergrad who always showed up to exams with her hair and makeup done and a nice outfit on (while the rest of us looked like we hadn’t slept or changed our clothes in days). Her theory was that if you were going to go down in a spectacular train wreck of an exam, you might as well look good doing so. In that spirit, I did my makeup and hair and dressed up all spiffy-like (even wearing my kickass boots, seen here). Sarah and I caught the bus (surprizingly, we had no transportation misadventures on the way) and made it to the Grad Student Centre, where the official doctoral exam room is, with plenty of time to spare.

Now, I mentioned in a previous posting that when your examiners show up to your defence in Hawaiian shirts, you know things are going to go well. My theory being that if the examiners wanted to fail you, they’d be showing up in a suit to exert their authority. So when examiners showed up in biking gear, my spirts were buoyed.

The process for a doctoral defence is that you give a 20-30 minute presentation on your research and then the examiners, who have all had at least 4 weeks to read your thesis, get to ask questions. They get 20 minutes each for the first round, then the audience is given an opportunity to ask questions, then another round of questions from the examiners (if they so desire). There are 6 examiners in total – 3 from your supervisory committee**, one from your department who is not on your supervisory committee, one from another department (also not on your committee) and an external examiner, who is from another university (the external doesn’t actually come to the defence – he or she just emails their questions and their ranking of your thesis). After that they kick you and the audience out of the room so they can deliberate and then call you back in the room to give you the verdict.

As for my defence, I thought that my presentation went quite well (some of the examiners even commented that they felt the presentation was well done and really made the findings of the thesis very clear), but I didn’t perform as well as I would have liked on the questions. Some of the questions I handled alright, but there were a few where I really did know the answer but couldn’t quite recall the details that I needed. I really think the stress was getting to me… I’m usually much better under pressure, but the stress of not just the defence itself (which is bad enough) but of all the many and varied personal and professional catastrophes I’ve been experiencing in the past year all seemed to pile up on me and the strain was just a bit too much for me to perform as well as I would have liked. But apparently the stuff I did answer, and my handling of the stuff that I didn’t know, was good because I passed! And with very minimal revisions to do! So now I just need to make those revisions, show my supervisor that I did what they asked for and I can hand it in and then I’m totally done! Woot woot!

After the defence, there were many congratulatory hugs, “I told you it would be fine!”s and photos taken. Then my supervisor took a bunch of my friends and colleagues to lunch at the Banana Leaf in Kits. After that I had to meet with her to go over the revisions, as she was leaving the next day for a week long camping trip. When I returned home, Sarah showered me with cards (from her and Dave, and from her parents) full of money*** and double Amaretto & diet Pepsis. I called my parents to tell them the good news, and then I called my sister, who, along with my neice, was in Halifax visiting her friend****. My sister said to my neice, “Say “yay Aunt Beth”! Aunt Beth got her Ph.D.!!!” To which my neice confidently replied, “Tomato.” As if to say, “Ph.D., Ph.schme. I would like to eat one of those delicious looking cherry tomatoes!” Leave it to a 20 month old to put things into perspective!

After the phone calls, there was lounging and chatting and then, due to my ineptitude (and probably the effects of the dA&dPs setting in), we missed the bus that was supposed to take us to meet Kalev by about 30 secs, so we had to walk 17 blocks (and it would be the first day it had rained on Sarah’s entire trip here!) rather than wait for the next bus, which wouldn’t be until 20 minutes later. Meeting up with Kalev on Broadway, we hopped on a bus to take us to the dinner that Sarah had organized (as I had refused to organize my own dinner, as such presumptious behaviour on my part would undoubtedly have jinxed me). Kalev & Sarah didn’t tell me where we were going and despite my valiant efforts at guessing, it wasn’t until I could actually see the restaurant that I figured out we were going to Habibi’s. Despite the fact Kalev had introduced me to this source of Lebanese deliciousness a mere week earlier, I got off the bus going, “Where are you taking me? There are no restaurants around here!” For the second time that day, I had Kalev ordering for the whole table (since we decided to order a bunch of dishes to share). There was a slight panic when we were informed that the keg wasn’t working and we couldn’t get any beer, but they later informed us that they’d fixed it, much to the relief of Rachel, who I thought might actually die from the shock of not being able to have a beer with dinner. The next big shock came when I was presented with a scrapbook – a brilliant idea of Shalu’s. It was full of all kinds of pictures from my friends (including a few pictures that I hadn’t seen before!) and which everyone who attended the defence and/or the dinner had signed and written stuff in. I was totally shocked when I opened the first page and saw pictures of me that had been taken right after my defence that morning*****! Also shocking was that I had no idea that everyone was sneaking out during dinner to sign my book, which was sitting on a table on the patio right in plain view!! I’d noticed people going outside during dinner, but hadn’t been paying much attention and kinda thought they were just going outside to talk on their cell phones… closer to the end of dinner I sort of noticed that someone was at a table outside writing something, but at that point it was kinda dark out, so I wasn’t even sure that it was someone from our group and, if it was, I figured maybe they were signing a card. So I was totally surprized – and very touched! – that my friends had done this for me!

After dinner, a bunch of us went downtown to find a club. Seeing as it was a Tuesday, there weren’t a lot of options, so we opted for the Roxy. Not the fanciest of clubs, but it had a lot of people in it, the music was good and, unlike Celebrities, the boys there are straight. Rachel bought the first round of drinks, which included Jager Bombs for all! Yay Jager Bombs******! And thereafter much dancing, drinking and debachery followed.

The next day was kind of a blur, but I do
recall lunch at Sodas and a quick trip to the Liquor Store to procure some delectable BC wines for Sarah to bring back to Ontario. And then a cabbie came and whisked her away to the airport! =( And I missed her as soon as she was gone! Sarah, I can’t thank you enough for coming all this way to support me during my defence! You are the best PPP, post-defence-party-planner and friend that a girl could ever ask for! You rock!!!

The next day I got a lovely surprize – my parents, sister and neice had sent me some beautiful flowers! Check them out! 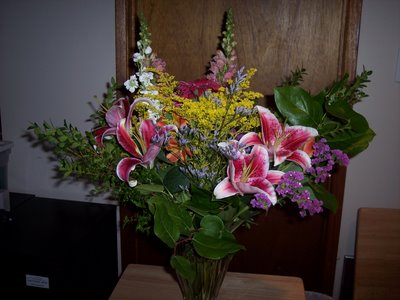 *In one of my citations I had referenced an article that, apparently, was published in 1007 (rather than 1997). Man, that’s one OLD article!

**You can have 2 or 3 from your committee… I had 3. And I will just add that I had the best committee ever, so I was perfectly happy to have 3… heck, I’d have had all 5 if I could have! (OK, not really… but I did really like all my committee members!)

***Money which is being put towards the digital camera I keep whining about not having!

****readers of Touch You Last will know her friend as the intrepid commenter, BRNQ

******for the uninitiated, Jager Bombs are a shot of Jag dropped into a glass of Red Bull. And they are currently my favourite drink.